"If I go out there and finish Cub Swanson, I feel that will push me to the top of the pack." - Dustin Poirier 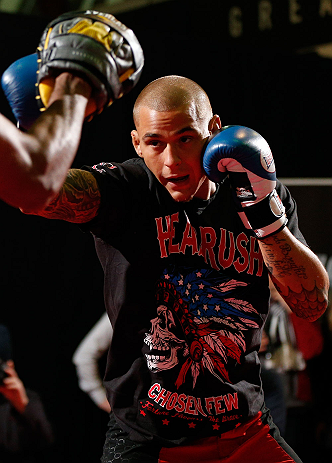 Valentine’s Day will have to wait for the Poiriers, Dustin and Jolie, this year. For now, Dustin Poirier is on a business trip in London, dealing in fists and kicks, not stocks and bonds, and when it’s over he intends on heading back home to his bride in Florida with a victory that will get 2013 off to a start that no chocolates or flowers can match.

“I’m focused on the fight,” said Poirier, who faces Cub Swanson in a highly-anticipated UFC on FUEL TV co-main event at Wembley Arena. “When I fight in Vegas, my wife usually comes and we can afford to do all that (sightseeing, etc.), but I’m going out here with my training partners, we’re on a business trip and I’ll see everybody when I get back from work.”

That doesn’t mean the 24-year-old Louisiana native isn’t thinking of Jolie. In this game, having a solid home life and supportive significant other can be just as important as the right game plan or training partners. That was never more evident than after Poirier’s loss to “The Korean Zombie,” Chan Sung Jung, last May, when he believed that a move to south Florida to train with the American Top Team would be the best move for his career.

“She didn’t hesitate on the move,” said Poirier of his wife. “She just asked if that was what I thought we needed to do and she was with me a hundred percent. My wife supports me so much and she’s such a huge part of my fight career. She has so much belief in me it brings tears to my eyes just talking about it. She’s awesome.”

When Poirier talks about fighting, or anything for that matter, there’s an urgency and intensity that’s impossible to miss, and his desire to make it to the top of his profession is that of someone a lot older. And his profession is tougher than most, with one good or bad night often a difference-maker when it comes to your place in the pecking order and the health of your bank account.

Poirier had a good night against Jung last year. Not good enough to get the win, but good enough to earn a Fight of the Night bonus and recognition as one of the best fights of 2012. When I saw him a couple months after the bout and complimented him on the fight, he was still inconsolable about the defeat, his first since 2010. And nearly a year later, the wounds are still a bit raw.

“That loss is never gonna be off my record,” said Poirier, who was submitted in the fourth round. “I’m never gonna forget about that fight. Yes, it was an awesome fight, but I was on the losing end of it. I know I have heart and I know I can push and I know I can fight fights like that, and that wasn’t a surprise for me. So I’m not trying to hold on to that excitement from the fight. I lost the fight, the loss is on my record, “The Korean Zombie” moves forward, and I took a step back.”

He pauses before adding, “But it was a learning experience.”

What Poirier learned the most was that he needed a change of scenery. While he got good coaching from his longtime mentor Tim Credeur and others, his rapidly growing skill set made it evident that he was becoming the best fighter in the gym, which meant not being pushed as hard as he needed to be pushed in sparring. He doesn’t have that problem with American Top Team.

“I knew I needed better training partners after my camp for ‘The Korean Zombie,’” said Poirier. “I knew I needed to be getting pushed harder and I don’t want to lose, so I just did what I thought I had to do to keep growing as a fighter and to win fights. And it’s paid off so far. It was a big move, I had to leave my family and friends back home and move somewhere where the first time I had been there was to train. I had never been to South Florida before, but the team here at American Top Team welcomed me with open arms, the trainers are great, I’m getting great coaching, great training partners, so everything’s working out.”

In December, Poirier made his first start since the Jung fight against former Ultimate Fighter winner Jonathan Brookins, and at 4:15 of the first round, “The Diamond” was back in the win column with a D’arce choke submission victory. Soon after, Swanson’s original opponent, Dennis Siver, withdrew from Saturday’s bout due to injury, and Poirier jumped right in.

“I wasn’t injured or anything,” he said. “I didn’t take a beating in my last fight, and I was still healthy, so it wasn’t really a hard decision. It was a great matchup for me, it’s going to be an exciting fight and it’s a big opportunity. So why not jump on it?”

Why not, indeed? Especially since a win over the streaking Swanson will accelerate Poirier’s return to the featherweight title picture.

“That wasn’t my thought process in accepting the fight, but if I go out there and finish Cub Swanson, I feel that will push me to the top of the pack,” said Poirier, who believes Swanson’s unorthodox style may be his downfall this weekend.

“He (Swanson) is unpredictable. His standup looks great, he has really good boxing and unorthodox kicks. It seems like he gets careless sometimes in his fights and he doesn’t care about getting taken down or where the fight will end up; he’s just kinda out there doing his own thing, and I think that’s where I’m gonna make him pay. When he gets in his zone and starts getting his head movement going and footwork going, he does stuff that puts him in bad positions and I just gotta capitalize on it. I feel like I have great boxing too, and I’m gonna show it in this fight.”

And when it’s over, it will be a belated Valentine’s Day in Florida, and a time for the two Louisiana lovebirds to get acquainted with their new home city.

“It seems like since I’ve been here I’ve been training for a fight,” said Poirier of life in Florida. “I haven’t got to really enjoy the area that much or the food or the culture here. I’ve been in my apartment or at the gym getting ready to fight somebody. So maybe after this fight I can relax and eat some of the food and enjoy the weather.”