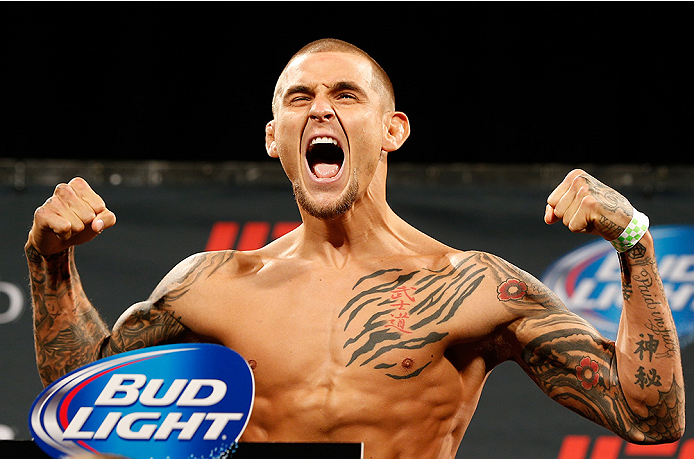 It’s the oldest cliché in combat sports, and that’s only because it’s true.  But when you tell Dustin Poirier that losing is part of the game, he knows it, but he doesn’t want to hear it, and he certainly doesn’t accept it.

He could be one-half of a Fight of the Night war like he was against Chan Sung Jung in his last visit to Fairfax, Virginia in 2012, but since he didn’t get his hand raised, he doesn’t accept any praise for his performance, won’t see the bright side of what happened that night.

So as he returns to Fairfax to face Diego Ferreira this Saturday, his last fight – a September 2014 loss to Conor McGregor – still isn’t completely in the rearview mirror.

“I’m trying to keep the most positive attitude I can towards this and I’m trying to learn from each fight,” he said. “But man, every loss hurts so bad because I care so much about this. This means everything to me. I know that I’m going to be a world champion, and it just feels like setback after setback, and these really hurt me. This is my life. This isn’t just something I do; this is me.”

So none of this is business to the 26-year-old Louisiana native; it’s all personal, and that’s what makes Poirier one of the best in his line of work. But emotion and attitude can only go so far, and despite having the talent that saw him win eight of 11 UFC bouts at featherweight, each fight came with a heavy price as he tortured himself to make the division’s 145-pound limit.

“I was trying to stick it out at featherweight as long as I could because I knew I was close to the top,” he said. “I was (ranked) number six and most of the guys ahead of me had already lost to (champion Jose) Aldo, so I was close to a title shot. But after my last fight, I knew it was probably going to be four or maybe more fights, and that could be a year to get back to title contention, and I don’t know if I had it in me for that many weight cuts. 145 was really hard on my body, especially to train hard and to recover. I would have to diet and starve myself for two months, and then get to the show and still have 20 pounds to cut. That was just too much. It would have been worth it if I could have got a shot at the title, but things didn’t go the way I had it planned.”

Plans rarely go the way you want them to in the world of four-ounce gloves, but as Poirier prepares for Ferreira, he doesn’t go into the fight as someone entering foreign waters. The first nine bouts of his career were fought at lightweight, and he’s confident that more than four years after his last appearance at 155 pounds, he’s about to show off the best version of himself yet.

“I was good at featherweight, I really was,” he said. “But shrunken down, hurting, I don’t think I was fully myself. So I was good at featherweight but I’m gonna be great at lightweight. There’s a difference between good and great, and I’m gonna show that difference. I’m gonna be a complete, all-around great fighter. I had a long time to really get mentally and physically ready for this fight, I have a great team pushing me, and I really feel like this is the one where people are going to see who I really am.”

And losing is not an option he considers or expects to possibly deal with. Maybe that’s the real difference between Poirier and his peers, though he doesn’t look at his approach as better or worse than theirs.

“I don’t really think about it that much, but I know exactly what you’re talking about,” he said. “Guys say ‘it just wasn’t my night; I’ll get the next one,’ or whatever. And that’s a good attitude for some guys, I guess, but I just feel like it’s such a big deal when I lose because I prepare so well and I feel like I’ve done everything right. I’m the best in the world, I really feel that, and I want to go out there and show it, and when I come up short, I just can’t believe it. But everybody’s different, and now I’m starting to learn to keep moving forward, take whatever positives I can from it, and get ready for the next one.”

The next one is just days away, and despite all the gravity Poirier puts on the result of each fight, he has not lost his sense of humor, with a lengthy discussion of his black belt in the style of Rex Kwon Do (of Napoleon Dynamite fame) lightening the mood considerably. But when the topic moves back to the fight and his opponent, “The Diamond” gets his game face back on.

“He’s a tough guy and he comes to fight,” Poirier says of Ferreira. “He has great Jiu-Jitsu, but he doesn’t go in there and try to dive at guys’ legs and hold guys on the ground and play Jiu-Jitsu; he goes out there to fight, and if the fight happens to get to the ground or if he’s put in a position where he can put somebody on the ground, he does it. So he’s a fighter.”

But is Ferreira ready for a Rex Kwon Do roundhouse kick?

“He’s definitely not ready for that,” Poirier deadpans. “But who really is? You don’t want to take a roundhouse to the head wearing these bad boys.”