"It’s not how many losses you have, but how you recover from those
losses. I feel like I’ve always learned more from my losses than any
victories I’ve had." - Dustin Pague 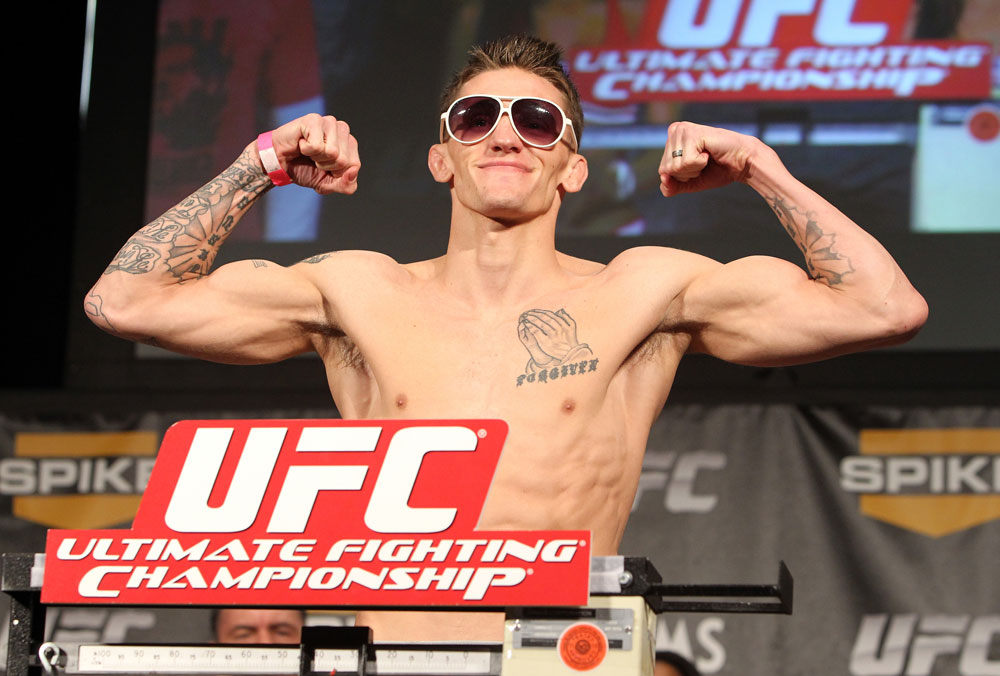 Every fighter hates to lose. It’s just that some hate it more than most. One of those fighters is Dustin Pague, and you can hear it in his voice when he talks about his recent setbacks against TJ Dillashaw and John Albert.

“Like most athletes, we just can’t stand to lose, and every time I get a loss, it feels like I train harder and want it so much more,” he said. “It just amps me up and makes me want to win even more because of my hate that I have for losing.”

Losing is the bad part when it comes to the nearly four year pro career of Dulles, Virginia’s Pague, who returns to the Octagon this Friday to meet Jared Papazian in a bantamweight bout. But a lot of times, you will see a hot prospect rise untouched up the ranks, and then a single defeat can derail him and keep him from ever being the same fighter again. When it comes to the 24-year Pague, he suffered through a worse string early in his career as he dropped three in a row in 2009-10.

His response? A five fight winning streak that led him to season 14 of The Ultimate Fighter and victories over Tateki Matsuda and Louis Gaudinot before his semifinal defeat to Dillashaw.

“I think that shows the heart of a champion,” he said. “It’s not how many losses you have, but how you recover from those losses. I feel like I’ve always learned more from my losses than any victories I’ve had.”

At the moment though, the fight still fresh in fans’ minds is his TKO loss to John Albert on the TUF 14 season finale card last December.

“Every so often it happens to me in fights, and obviously, that fight in particular, because it meant so much to me,” said Pague of the loss. “It was, in my eyes, the biggest fight of my life. I think I put a little too much pressure on myself, and I feel that I perform my best when I’m relaxed and just really loving the sport.”

These days, Pague has a new lease on his fighting life in the UFC, a second chance to let the world know that he can compete on this level, and yeah, he’s loving the sport.

“It’s a blessing,” said Pague of his UFC call back. “That’s how I look at it, like a second chance, and it really adds fuel to the fire. Obviously, people think of you as only being as good as your last fight, so I think a lot of people are counting me out and judging me off that last fight. And the reality was, I got sloppy, I went against my gameplan, and I just got caught. I don’t think it really showed what kind of fighter I am, so I’m really gonna stick to my gameplan here and really show the UFC fans and the UFC that I’m a much better fighter.”

Luckily, he has a willing foil in California’s Papazian, who also suffered a defeat in his UFC debut. The difference was that Papazian had a three round war with Mike Easton in January that many believed should have gotten Fight of the Night honors before he dropped a majority decision. Yet what happened in the past really doesn’t matter at this point, especially when this Friday’s meeting could meet or surpass what happened in Easton-Papazian.

“He’s a very exciting fighter and we match up perfectly,” said Pague, who has finished each of his pro wins. “I think this is a fight that no one’s gonna want to miss. We have similar styles, we like to stand and bang and throw bombs and just keep throwing until someone falls down. That always makes for a good fight. I have all the respect in the world for Jared. He’s a tough guy and he’s definitely not one to take lightly, so I’m looking forward to it.”

If Pague turns back Papazian and secures his first UFC win, it will be the first major milestone in a career that began with the Pennsylvania native picking up a UFC DVD at Blockbuster Video. Six months later he had his first amateur fight, and he was off and running. That was over six years ago, a short span in some ways, but a long one when you consider what he had to learn and go through to get here. But after going through his set of growing pains, he feels like he’s in the perfect place and situation to make his mark.

“The last fight I was kind of transitioning the places where I was training, and for this fight I just feel so focused,” he said. “We had a perfect train-up, a great facility, great training partners, and a perfect progression. I couldn’t ask for a better train-up, so I just feel ten times more confident for this one and I know it’s gonna be a better night for me.”

“My training partners and my instructors know that now,” said Pague. “They kinda knew before, but I just let them know how much I need that encouragement and a constant reminder of ‘hey buddy, we’re here, let’s have fun. It’s like any other fight; just go out there and do what you love.’ So with those constant reminders, it just gets stuck in my head eventually.”

At least he hopes so. Pague laughs before giving his ultimate goal for Friday night.

“I just want to showcase my talents. I’m going to go out there and put on a show. Win or lose, I guarantee that it’s gonna be exciting. I want everyone to not blink.”