Dustin Pague: Everything is On the Line at UFC 161

"This fight is going to be fireworks. Yves and I are going to put on a show for everyone." - Dustin Pague 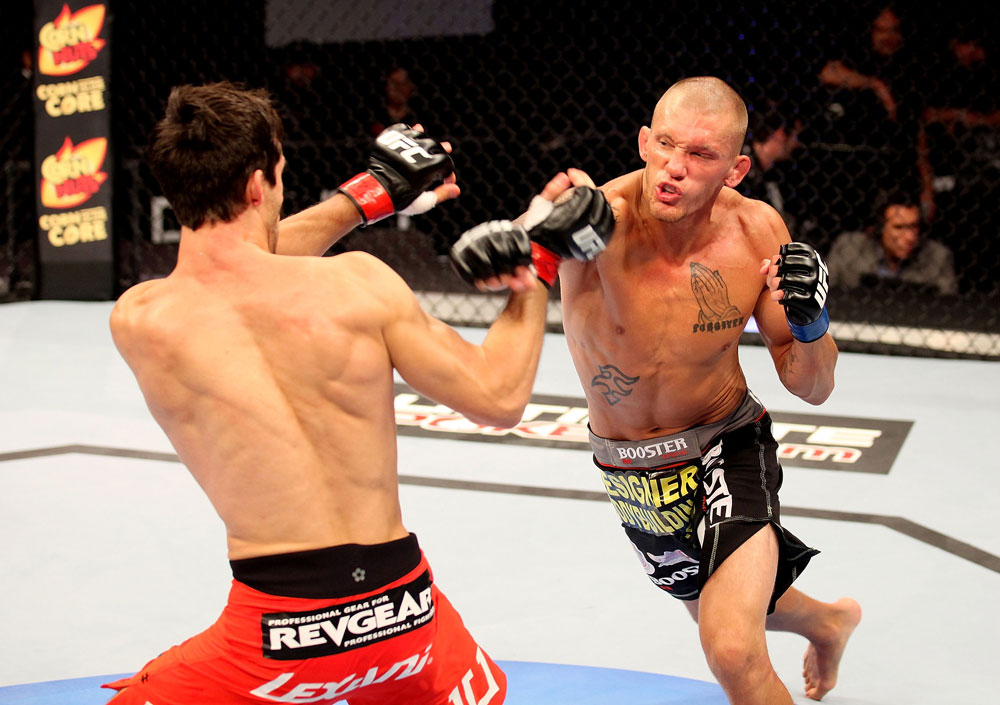 When you are a fighter competing on the sport’s biggest stage, pressure is something you are familiar with. But when you are a young fighter, looking to gain traction with the most successful promotion in mixed martial arts, and you are in the midst of a two-fight losing skid, the pressure amplifies to an entirely different level.

This is the reality Dustin Pague is facing.

After competing on the 14th season of The Ultimate Fighter, “The Disciple” entered the UFC fold looking to establish himself amongst the best in MMA. But that journey has been rife with struggle as the 25-year-old has found victory in only one of his four showings inside the Octagon.

Nevertheless, it would be impossible to look at Pague’s record and not understand there were extenuating circumstances involved where several of his losses are concerned. Immediately following his victory over Jared Papazian at UFC on FX 3, the Pennsylvania-native stepped up on six days’ notice when Francisco Rivera pulled out of his bout with Ken Stone due to injury.

The decision to make such a rapid turnaround ended up being a case where Pague’s ambition got the best of him as Stone walked away the victory via split decision. Looking to get back into the win column in quick fashion, Pague accepted another bout on short notice and squared off with Chico Camus at UFC 150 a little over a month later.

Once again the quick turnaround didn’t work in his favor as Pague suffered a unanimous decision loss to the Duke Roufus-trained fighter.

The loss to Camus in Denver placed Pague’s back firmly against the wall and the TUF alum is making no illusions about his situation. He knows there is no more room for error and he will be looking to lay everything he has on the line when he steps back into the Octagon to face Yves Jabouin this Saturday at UFC 161 in Winnipeg.

Where he attempted to help the promotion out by taking back-to-back bouts on short notice, Pague’s current mindset is all about keeping his place on the UFC roster. He’s fully aware his employment status will be on the line this weekend and he will hold nothing back when the cage door closes.

“It’s a tough fight, man,” Pague said. “He’s a great fighter and I’m looking forward to it. For me, this is like the chopping block. For me to stay in the UFC I have to win and I have to win impressively. Unfortunately that’s in the back of my mind, but I’m going to treat this like any other fight. I’m going in there like he’s a world champion. I’m going to put on a show and fight my heart out.

“It’s unfortunate because my last two UFC fights—not only did I take them on short notice and didn’t have time to properly train - but I also had a pretty serious injury no one knew about. I found out I had two herniated discs in my back and it was super painful. I was having serious sciatica down my left leg. But when I get those calls to fight, I just can’t say no. I wanted to show Sean Shelby, Dana White and Joe Silva they can rely on me. It probably wasn’t the best idea to take those fights on short notice with an injury but it’s hard for me to say no. I’m a fighter and fighters fight.”

Pague will have a tall task in front of when he locks up with Jabouin at UFC 161. The “Tiger” has been on a tear since dropping down into the bantamweight division, winning three of his four showings in the weight class, with his only loss coming at the hands of current contender Brad Pickett at UFC on FUEL TV 7.

The 34-year-old Haitian brings a diverse standup arsenal into the cage and has built his reputation on the strength of a versatile mixture of strikes. The TriStar fighter will be looking to get his career back into the win column but Pague believes he has the answer to the riddles Jabouin brings to the table.

“He’s pretty unorthodox,” Pague said. “He likes to throw spinning kicks and he does it effectively. Most people can’t land them properly but he does a good job of landing that kick and some of those strikes. It’s something we’ve been working on and I’m going to do a good job of pressuring him. I’m not going to give him the opportunity to land those types of strikes. I think if you keep the pressure on him it is going to be hard for him to get those off.

“I like the matchup. It’s a good test for me and a good challenge. I’m excited and it would be a great victory. It would really help to get my name back on the charts and to start building myself back up. This fight is going to be fireworks. Yves and I are going to put on a show for everyone."

With the possibility of losing his place on the UFC roster hanging overhead, there is no need for added motivation for Pague. Nevertheless, when he factors his young family and the years of hard work and sacrifice he’s put into reaching the UFC, the fires of inspiration are raging and he won’t go out without putting on the fight of his life.