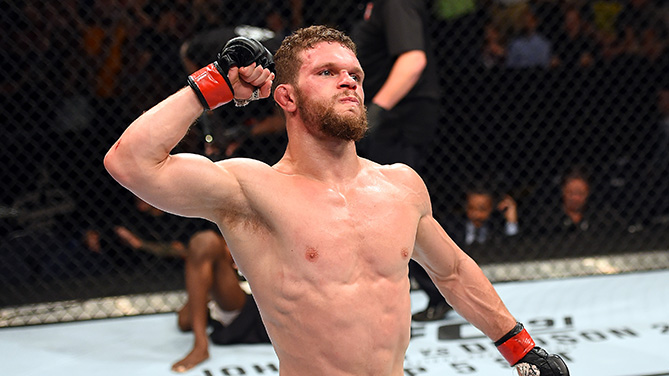 Fresh from an impressive third-round knockout of Willie Gates in August and eager to add to his win total this Saturday in Newark against Wilson Reis, flyweight contender Dustin Ortiz has a simple mantra for 2016 and beyond.

He’s not kidding either, and he has the track record to prove it. In the Franklin, Tennessee product’s first year as a pro in 2010, he fought six times, and if you’re going from November of 2013, when he made his UFC debut by defeating Jose Maria, to November of 2014, that was a five-fight stretch right there.

But after fighting and losing to Joseph Benavidez in that latter bout, Ortiz had to sit back and get some things figured out.

“It’s hard to just go about your day knowing that you’re coming off a loss,” he said of his daily routine post-Benavidez. “I took a little time to reevaluate my learning process and my training and what I was doing for these fights. And that was needed. So when I got back in there, I put my mind right and my body in order.”

When he returned against Gates in his home state of Tennessee, he had every reason to not be at his best – ring rust, fighting at home, fighting a late-replacement opponent – but he didn’t need any excuses. He just did his thing and picked up the win, perhaps the most impressive of his UFC stint.

“Looking back, it definitely was a lot of pressure,” Ortiz said. “I didn’t feel it at the time, but once I got through everything, I realized I’m back in front of my home crowd, where I haven’t been in a couple years now. I was scheduled to fight Ian McCall, so I was preparing for a different fighter, and then I get Willie Gates – an awesome guy, very tough opponent, but he’s an up and comer. He’s got nothing to lose. So the pressure was there because I felt like I had to win, I had to make a statement and I had to finish this guy to really prove that I’m getting better each fight and really learning and honing my skills as a fighter and as a professional.”
Dustin Ortiz fighter profile | Ortiz gunning for the top spot

Ortiz did all of the above, solidifying his top ten ranking and setting the stage for a title run in 2016. The only thing is, the 27-year-old Roufusport team member wanted to get that run started a little earlier.

“Coming off a huge win, I want to keep my hype going and I want to keep my name out there in the media,” he said. “Let’s keep the ball rolling. After a performance like that, you’re still hungry and your mind and your body are in the right spot. I walked out of that fight with absolutely no injuries. I took a week or two to relax and let my body heal from the adrenalin rush and the fight camp that I had just put in and everything that goes into the fight. And I was back at it.”

The schedule didn’t allow Ortiz to get back in the Octagon any sooner than this Saturday, but he didn’t sit idle waiting for his chance to return.

“I used this to my advantage and I’m getting as good as I can while I’m sitting out,” he said. “I’m ready at all times. I’ve been waiting for a while and I’m good to go.”

And ready for a challenge in fellow contender Reis, who currently sits in the number 12 spot at 125 pounds. The winner of this one is likely to get an even bigger fight next, and Ortiz already has his hand ready to be raised.

“Every fight I’m trying to build up, I’m trying to finish guys and trying to get my name out there,” he said. “Reis is a tough guy, he’s an up and comer as well, he’s giving everything he has to be in the same position and we’re neck and neck right there. Either one of us, from this point on, can easily rise to the top. So I’m doing everything in my power right now to make sure I’m that guy.”

Then it’s only onward and upward from there.

“I’m trying to fight for that belt any chance I get,” he said. “An impressive win over Reis, maybe even two more after that, and then a title shot at the end. This year is about building up my character, building up my fight skills and really earning that title shot. And I will do it this year. This year is my year, I’m remotivated, I’m in the gym all the time, I’m getting my name out there and I’m getting my skills right where they need to be to take that belt.”