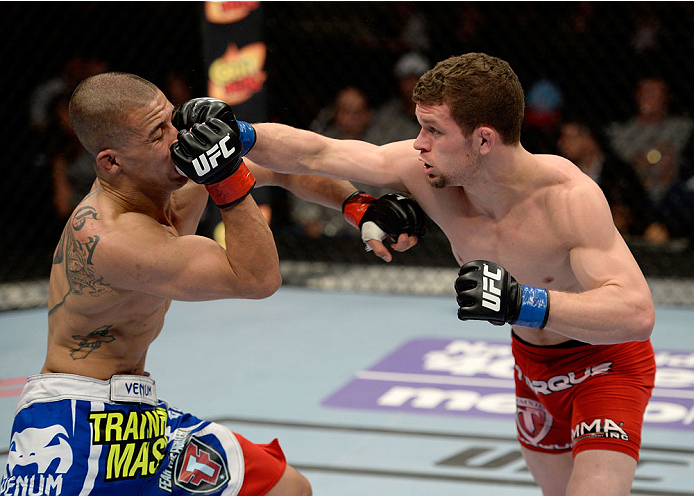 The flyweight division may still be in the early stages of its development on the grander scale, but there are no easy roads that lead to a shot at the 125-pound crown. This is especially true when talking about Dustin Ortiz.

One win into his UFC run the prospect jumped into the Octagon to face John Moraga - a fighter who was fresh off a title opportunity of his own. And while the 25-year-old Tennessee native would ultimately come out on the losing end of a split decision that could have gone either way, the trial by fire experience of mixing it up with an established title contender still made for a great learning experience.

So much so that Ortiz hasn’t visited the loss column since. The scrappy grappler has turned his 2014 campaign into a highly positive one, as he’s racked up back-to-back victories over tough competition on the sport’s biggest stage. The most recent came at the expense of fellow highly-touted prospect Justin “Tank” Scoggins at The Ultimate Fighter 19 Finale back in July. It was a battle to see what projected future star would take the big step first, and it was Ortiz who proved too much to handle that night in Las Vegas.

“To be honest I haven’t watched the fight all too many times, but I know I went in there and did what I had to do to get the win,” Ortiz said. “I also went in there and did exactly what I said I was going to do. I put the pressure on him and stayed right on him the entire time and he didn’t really know how to handle it. Therefore, I came out with the win and it’s going to be a great learning experience for him. He made a mistake in the second round and I capitalized on it.

“It’s hectic inside the Octagon and there isn’t really any time to step back and observe the situation you’re in. But I’m getting more comfortable in there each and every time out, and things are only going to get better with as much as I work in the gym.

Nevertheless, Scoggins was no pushover, and Ortiz’ next challenge will come in the deepest waters he’s yet to travel in the flyweight pool when he faces former two-time title challenger and perennial contender Joseph Benavidez at UFC Fight Night: Swanson vs. Edgar. Benavidez has never lost a fight where there wasn’t a title on the line, and while that statistic could serve to make the matchup with Benavidez all the more intimidating, it actually has the opposite effect on Ortiz.

The Roufusport representative believes it’s his time to make a run at the title, and defeating a fighter with the amount of championship experience Benavidez has will be the perfect addition to his growing resume.

“I really don’t know what to expect from the UFC anymore,” Ortiz laughed. “I came in and went down to Brazil for my very first fight. There are fighters who have been in the UFC for years who dream of going down there to fight, but here I am thrown on to a card down there for my debut. I went up against Moraga in my second fight, and it’s not surprising they decided to put me in another big fight. It’s the biggest fight of my career and has the potential to catapult me to the top, which is precisely where I want to be.

Ortiz thought he’d get some “R & R” in Las Vegas following his victory at the TUF 19 Finale and he decided to help his teammate Anthony Pettis coach the current installment of the reality-based fighting program. That wouldn’t be the case, as matchmaker Sean Shelby came to call about a potential fight with the Team Alpha Male staple. Unfortunately, Ortiz suffered a slight injury to his arm during his most recent showing and had to turn the fight down because of it.

The hard-charging flyweight feared he had missed the biggest opportunity of his career, but when the offer to scrap it out with Benavidez circled back a few weeks later, he was admittedly ecstatic with that particular turn of events. He makes no bones about the talents Benavidez presents, but solving a riddle only two world champions have ever solved before him is precisely the caliber of obstacle Ortiz wants standing in his way.

“It’s very hard to tell the areas where Benavidez is weak because he’s been out there with so many good fighters,” Ortiz said. “I believe he can pretty much handle anything. He’s well-rounded and can take the fight anywhere. I think it comes down to the person that’s fighting him and what they are able to do to Joe. It’s about what they bring to the table and I’m going to bring some pretty interesting things to this fight with him.

“I set a pace that wears fighters down, and I know he always comes into the fight in shape, but I have to believe that’s possible. Come fight night we are going to find out.”

And while his eagerness to jump into the shark tank with a perennial threat the likes of Benavidez may seem to be too much too soon to some, for Ortiz, a win in this fight opens the doors to the greatest prize of all. Much like every fighter on the rise, the prize Ortiz sees at the end of the road is the 125-pound title, and he’s determined to make that dream come true.

Current champion and pound-for-pound great Demetrious Johnson has all but cleaned out the flyweight ranks, and Ortiz wants to give “Mighty Mouse” that fresh challenge he’s been looking for.

“I’m a fighter in the UFC and every fighter that competes inside the Octagon wants their opportunity to fight for a title,” he said. “Demetrious Johnson keeps saying he’s ready for new contenders to emerge and I’m that guy. A win over Joe puts me in position to get a title shot and goes a long way in proving I’m ready to get that opportunity.