“They're just going to see the real Dustin Kimura. I put
all this pressure on myself, consciously or subconsciously. Now, I feel
like all the pressure is off." - Dustin Kimura 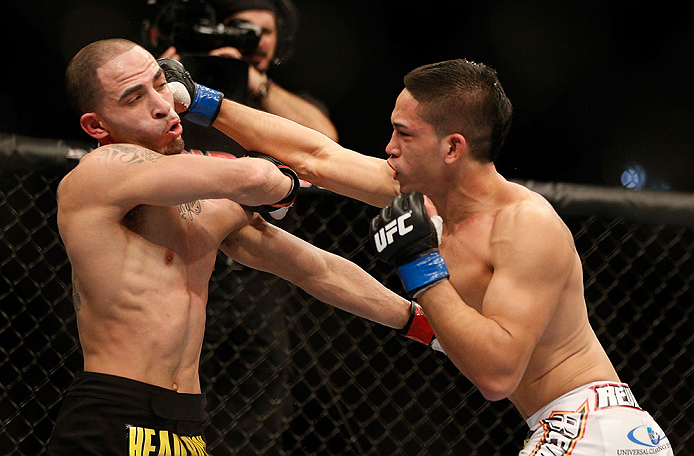 Talking to Joe Rogan is a good thing.

It’s almost always so that the fighter in the Octagon talking to the famed stand-up comic turned UFC color commentator is the organization’s most recent winner. And, if that fighter’s bout was a part of the preliminaries, they most likely just finished someone via tap, snap, or nap. Such was the case of Hawaii’s latest prospect Dustin Kimura, who shared a genuine moment with Rogan following his debut submission victory at UFC 156.

“That's what everybody remembers about my fight is what I said to Joe Rogan after the fight,” says Kimura. “It was so surreal to me. I was on cloud nine. Just to make it to the UFC and then to win my debut - it was so crazy to me. I couldn't believe it. I was just so happy.”

The proud father and husband-to-be was legitimately star struck as Rogan congratulated him on his round three rear naked choke of Chico Camus in February. It’s been 11 opponents and 11 wins with 10 finishes, including eight subs, for “The Diamond” in his young professional MMA career. While he has been in title fights and worn gold for local organizations within the United States’ 50 states, no bout had as much on the line and no victory could have tasted sweeter than the one in Kimura’s UFC debut over Camus.

“I knew it was going to be a tough fight,” remembers Kimura. “What really got to me more were those first fight jitters. I underestimated how much it was going to affect me. I didn't really believe in it. It felt like my debut wasn't as good as it should have been. Chico is a pretty tough opponent from a great school. My hat is off to him. I'm really glad I got to go in there and share the Octagon with him.”

After 10 minutes of back and forth action mostly spent on the ground, round three started with another takedown attempt by Camus, but this one was well-scouted by Kimura. “Once he went for that shot, I capitalized on it,” states Kimura, who reversed Camus’ single-leg attempt and took the mount position, which Camus defended by giving up his back. Seconds later, the choke was sunk in, thus removing any scorecards from the equation. “I pretty much knew he was going to do the same thing. In my mind, I was like I've got to finish the fight here because you never what the judges are going to do.”

Adding another sub stoppage to an already long list of them, one can easily assume that the 24-year-old is trained by an incredible grappling talent and he is: Rylan Lizares. A black belt in Gracie Jiu-Jitsu under the near mythical Professor Pedro Sauer, Lizares is the owner/operator/head coach of Gracie Technics in Honolulu, which is also the team that budding UFC featherweight Max Holloway is from. With Lizares’ reputation as having the best ‘jits’ on Oahu, it was Kimura’s dad - a UFC fan, a BJ Penn fan, and a judo practitioner - who sent his son to Lizares’ school. From BJJ to MMA, Lizares has helped hone Kimura’s natural aggression for a finish to a so far unstoppable submission machine.

Up next for “The Diamond” is a bantamweight battle on September 21st at UFC 165 in Toronto against local favorite Mitch Gagnon. After losing a debut Fight of the Night war against Bryan Caraway, the 28-year-old from Sturgeon Falls, Canada got back to the winner’s circle with a guillotine choke of Walel Watson at UFC 152. The sub stoppage marked Gagnon’s ninth in nine wins and his fifth of that particular variety. It will be one day shy of a year since Gagnon last fought, but Kimura is still expecting his opponent’s best.

“I think he's really good,” reveals Kimura. “He comes out super hard and is tough as nails and he looks really strong. His UFC fights have been pretty impressive against Bryan Caraway and Walel Watson. I've been training really hard because he's going to come out to knock me out or submit me right off the bat. That's what he always does and I'm ready to do the same. His ground game is tough, his wrestling is tough, and I've watched him. He tries to overwhelm his opponents on the ground and that might be his game plan with me, to overwhelm me on the ground with really heavy ground and pound.”

On paper, one might assume a grappling clinic will take place, with Gagnon’s ground and pound versus Kimura’s quick and slick style, but “The Diamond” begs to differ. “I always think my opponents are going to try and avoid that area, but they don't always do,” says Kimura who was taken down by Camus and fight fans saw how that played out. The Hawaiian is dutifully working on elevating his standup game at Gracie Technics as well, but a skilled submission magician like Kimura would relish a ground battle to show off more of his tricks.

More than anything, this contest is about Kimura fighting to his full potential. A win and a submission win are great, but, simply put, Kimura believes he could have fought better. Only he knows for sure how nerves affected his performance and how much pressure is off the young fighter’s shoulders with one win under his belt in the UFC. Heading into his second Octagon outing, Kimura is ready to fight with confidence while representing his gym, his family, his friends, and himself against a game opponent.

“They're just going to see the real Dustin Kimura,” he affirms. “I put all this pressure on myself, consciously or subconsciously. Now, I feel like all the pressure is off. I'm going to go in there, have fun, and do my job. I'm looking to put on a heck of a performance. I'm super pumped up, I'm super excited. I wish I was fighting this weekend.”

He’ll have to wait a week, but on September 21st at the Air Canada Centre in Toronto, a bantamweight brawl between two proven finishers will take place as Kimura faces Gagnon. “With my style and Mitch's style, we're going for an 'of the night' award,” asserts Kimura, who overcame jitters to score a sub and is now ready to wow fight fans with his full capabilities. “We're going for a Fight of the Night and if not then one of us is getting knocked out or submitted. We both go out there and fight, and the fans will love that. The fans will really enjoy watching us lay everything on the line.”

Another win, another finish, and Kimura will get another chat with Rogan, which is definitely a good thing.