Dustin Jacoby Is A Dangerous Man

Light Heavyweight Vet Making The Most Of Second Stint In UFC
By Thomas Gerbasi, on Twitter: @TGerbasi • Aug. 23, 2021

Dustin Jacoby saw it coming. He even issued a warning to Ion Cutelaba before their May 1 fight in Las Vegas, telling me in a pre-fight interview, “If you want to get in my face and yell, if that's what you gotta do to get yourself ready, by all means, go right ahead. Just do not touch me.”

At weigh-ins, Cutelaba decided to forego that advice, going right after Jacoby on weigh-in day. Jacoby didn’t back down and cooler heads prevailed, but if “The Hanyak” wanted to get in Cutelaba’s head, mission accomplished.

“I think he listened to all my interviews,” Jacoby laughs. “I've got two guesses as to why he did that. For one, he could have been listening and I said don't touch me and he's like, ‘Maybe I'll touch you.’ But what I think it really was, was that I never put my hands up (at a faceoff) and that fight, I put my hands up just to keep my space and keep him out of my space. And I think that provoked him. I think he saw that and there was no way he was gonna be able to scream in my face, so I think it was just one of those things where he acted right at the moment and just grabbed my neck the way he did.”

Just like that, what was already an intriguing matchup got even more interesting for the fans. As for the man fighting out of Englewood, Colorado, it was the type of viral moment that didn’t rattle him, but actually got him more amped up for the fight, which ultimately ended in a three-round draw. 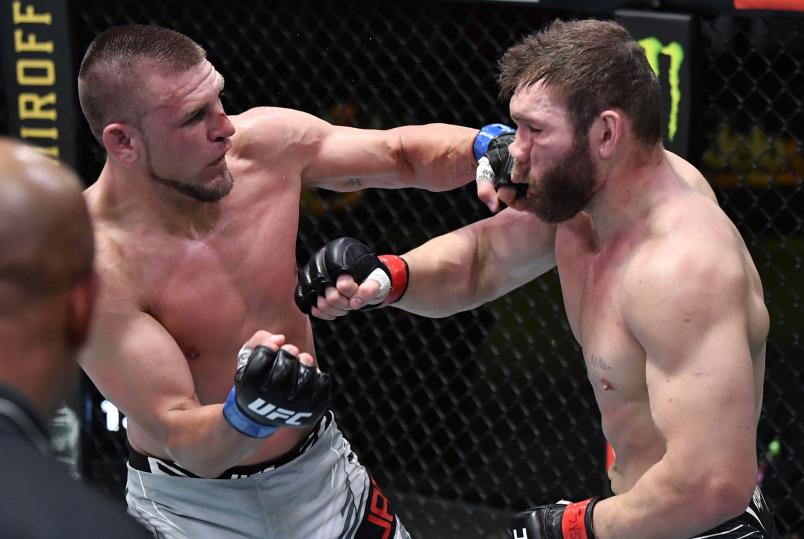 Dustin Jacoby punches Ion Cutelaba of Moldova in a light heavyweight bout during the UFC Fight Night event at UFC APEX on May 01, 2021 in Las Vegas, Nevada. (Photo by Jeff Bottari/Zuffa LLC)

“I was thankful for it - it broke the internet, got me a lot more followers, a lot more attention on the fight, and it ended in a draw, which I wasn't too happy about, but I'm over that. I took the fight on short notice, and he was training three months for that fight. I would love to get that back, have a full camp and put him away, but I've already moved on to Darren Stewart.”

Darren Stewart is next on the hit list for Jacoby, who is 4-0-1 since putting kickboxing on the side and returning to MMA full-time in 2019. It’s a stellar run for sure, and the evolution of his game was evident in the Cutelaba fight, where he rebounded from a rough first round to soar down the stretch and salvage the draw. That’s veteran stuff right there.

“The one thing I say is I've been through it to get to it,” Jacoby said. “I've been in those fights and if you look at my fight before that with Maxim Grishin, he had a good first round, he hit me pretty good and finished the round strong - he was on top and had my neck and there's been times in the past where I could have crumbled and said, ‘Hey, tonight's not my night.’ But I think just going through it to get to it, being the grizzled vet, I've got a lot of time spent inside that Octagon and a lot of experience fighting professionally in general. And I think I'm right at that point in my career that mentally, I can't be broken. And I work on that every day. There are practices where I'm feeling it and guys are getting me in submissions, but when it comes time to perform underneath those lights and to really get to the bottom and be drug through the mud and figure it out, it takes a guy who's been to the bottom and gets drug through the mud to be able to come out on top and knows what losing feels like. Nobody wants that feeling and I felt it and I'm over that in my career. I'm very headstrong going into these fights.” 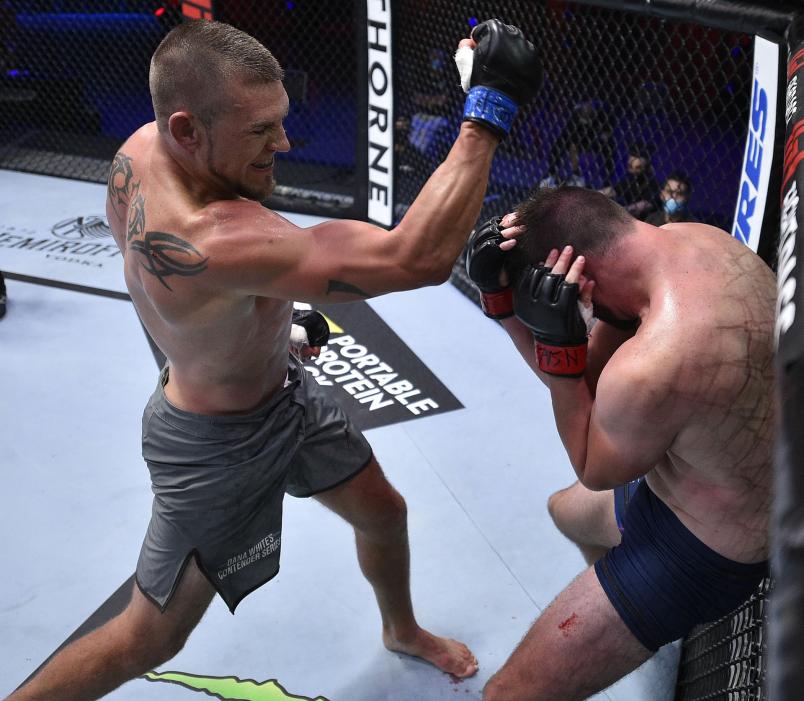 The results speak for themselves, even if Jacoby doesn’t exactly strike you as “grizzled” at the age of 33. He has been around, though, and it’s easy to forget that his first UFC stint was back in 2011, when he opened up UFC 237 against Clifford Starks. That event was headlined by a bout between Nick Diaz and BJ Penn, and for more perspective, of the 22 fighters on that card, the only three on the UFC roster today are Jacoby, Diaz and Donald Cerrone.

“It is weird when I say it,” he says of the ‘G’ word. “I remember being 27 and Drake came out with a song that had a line that caught me, saying that he's the rookie and the vet. And at 27, 28 years old, that's kind of how I was feeling. I was in the UFC at 23, got cut, fought for Bellator, Titan FC, World Series of Fighting, and then of course my 20 fights with Glory. And there I was feeling like the rookie and the vet. I was starting to feel the vet status right then, and ever since 2017, I feel like mentally, I'm there. I got it. I've been through the ringer. I'm experienced, I know what it takes, and I'm not an easy out for anybody. I really think I'm gonna go in there and put on one of my best performances yet against Darren Stewart and just climb that ladder.” 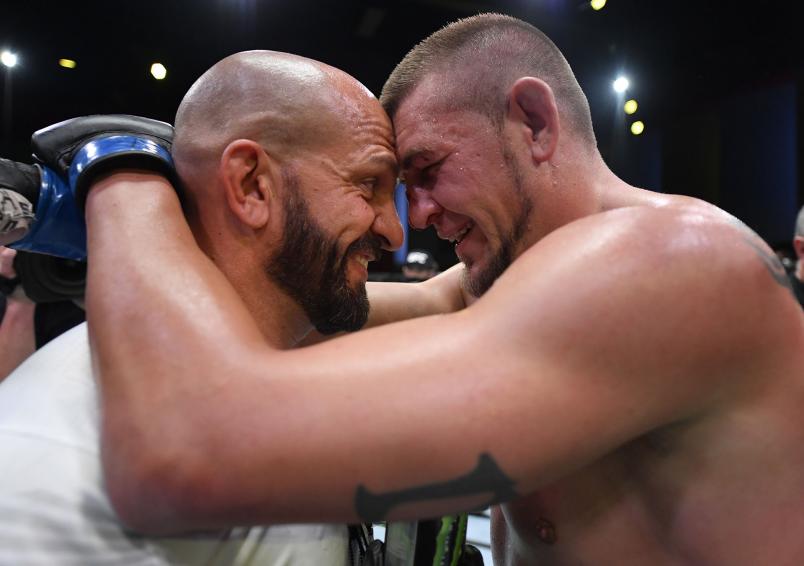 Dustin Jacoby (R) talks with coach Marc Montoya after the conclusion of his light heavyweight bout against Ion Cutelaba of Moldova during the UFC Fight Night event at UFC APEX on May 01, 2021 in Las Vegas, Nevada. (Photo by Jeff Bottari/Zuffa LLC)

Dustin Jacoby is a different fighter that he was nearly a decade ago, when he entered the Octagon with a 6-0 record and the idea that he was going to be running the place sooner rather that later. And that’s not just physically and technically, but mentally. That makes him one dangerous man in a dangerous division.

“I was nowhere near as headstrong as I am right now,” he said. “I kept going (after being cut from the UFC), I knew I wasn't done, I knew I still had a lot more to give, but mentally, it just wasn't all there for me and that's the biggest thing. Anybody can go out and compete and do great, but it takes a really strong mind to be consistent and be gritty and to know how to lose and just find ways to win. And that's something I work on daily.”