Unbeaten in mixed martial arts for over seven years, a stretch that includes a 4-0-1 record in his second stint in the UFC, Dustin Jacoby’s career is in the perfect place as he approaches a UFC 272 bout against Michal Oleksiejczuk this weekend.

But Jacoby’s success has not only affected the Coloradan, but his teammates, as well, as you can’t talk to anyone on the Factory X squad without hearing them speak of the positive influence the 33-year-old veteran has had on them.

“Honestly, I've always been a leader,” said Jacoby. “I've always been a guy that people look up to, and I feel like I'm pretty reasonable and I just try leading from the front. I try to be out on the mats and getting after it and being the guy going through the trenches, and I'm also a vet and I've been through it to get to it, as I often say. So, I'm always there for advice and I'm picking their brains, as well, and I'm taking everything in because I'm like a sponge. Anytime anybody's talking and we're on the mats training, I'm focused, I'm dialed in and I'm taking it all in. And, of course, I'm there to give my two cents when people want it or need it, and it's a great culture that we have in the gym that way.”

Order UFC 272: Covington vs Masvidal For Any Device!

Ask him if he’s always been that way, and Jacoby believes he has. It may have something to do with his upbringing, both from his family and from the time spent on various playing fields and in martial arts dojos.

“I think my whole life has helped with that,” he said. “I started wrestling when I was four or five years old, and I grew up with a twin brother, as well. We grew up saying ‘please’ and ‘thank you’ and we had manners and we always had discipline in our life through taekwondo and sports. There was no missing practice. You had to be there at practice, and we wanted to be there. There was always structure in my life and I think a lot of that's a credit to my mom, my grandparents and those that raised me, and that's how it's always been.”

Yes, even though his grandmother called Dustin and Darren little hanyaks (Polish slang for rascals) when they were young and tearing up the house.

“We were little hanyaks,” Jacoby laughs. “But that's also what made us the good athletes and the fighters we are.”

During our interview, I pull out a quote he gave me during his first stint in the UFC in 2011-12. 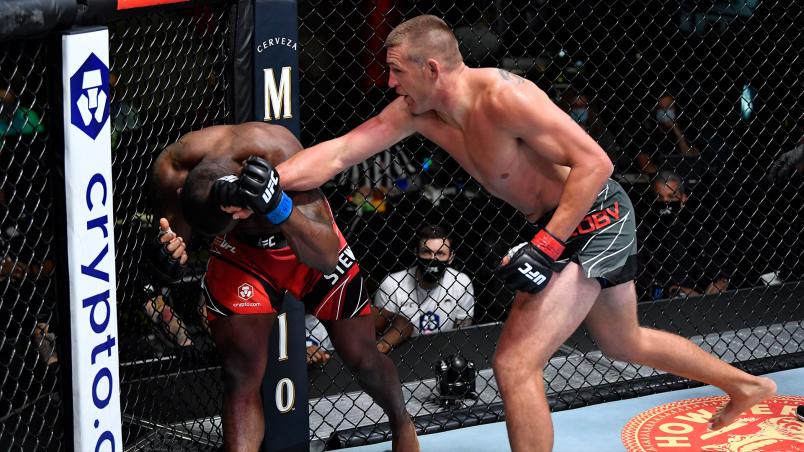 “I've been a competitor since I was a little kid and I've never not showed up on game day,” he said back then.

“That was a young kid that was just saying it and didn't truly believe it,” he said. That’s a fair and honest admission, but there’s nothing wrong with faking it until you make it, and Jacoby has made it. But he hasn’t done it alone.

“I've got great people around me,” he said. “My wife, Kahla, is an absolute saint, and she really is the entire backbone to the operation. She keeps me grounded and keeps me in the moment. We have our talks, and even coach Marc Montoya, having someone like that around you, and the leaders I look up to at Landow Performance and Jason House and Iridium Sports Agency, there's a special group around me that even when things get hectic, they keep me grounded. There are times that Marc pulls me to the side and says a few things here and there that I need to hear. It really is a credit to the people that are around me.”

That’s the definition of a leader. It’s never me, me, me, but all about the people around you. Not surprisingly, Jacoby was a college football quarterback, and that’s the guy you want taking the snaps.

“I've played every sport and I was never that guy who was too good,” he said. “While I was always a very good athlete and one of the best on the team, I still worked and listened like I was nobody. I've always been nose-down, work hard and I don't think I know too much.”

MORE UFC 272: Fight By Fight Preview | Fighters On The Rise | RDA Is Up To The Challenge | Masvidal Wants To "Wreck" Covington

You might say Jacoby is too nice to be a prizefighter. When we spoke seven weeks ago, I asked where’s the hanyak in all this?

“The dark side is coming,” laughs the fighter who seemed like the happiest guy in the building when he faced (and beat) John Allan last November. So is there a switch being flipped on Saturday night in T-Mobile Arena, or is this the “Happy Hanyak” forever?

“There was no pressure,” he said of the Allan bout, which he took on short notice. “I said, I'm not even supposed to be here right now, so let's just have fun. You go through all these emotions when you're in the back and, of course, that's the vet in me, too. Early on in my career, it's like, I'm not ready because I'm not mad. But when I do anything in my life and I do it well, I'm always happy. I always have a smile on my face. And I can still get competitive, and still get deep down and feel it because it's always me versus me on the inside and that's how I look at everything. But, in that moment, I was like, just have fun, be loose. Every fight's different, every walk is different, the emotions before the fight are always different, so who knows how I'll be at that moment on March 5th, but I've never done anything that well in my life being mad. So I try to be happy, try to breathe, the result is what it is and I gotta trust the preparation and go out there and give it my best.”