Light Heavyweight On An Undeniable Streak In Second Stint With The UFC
By Thomas Gerbasi, on Twitter: @TGerbasi • Jul. 13, 2022

Dustin Jacoby has always been an honest fighter. To his fans. To his opponents. And to himself.

So when he decided that juggling an MMA career with one in kickboxing wasn’t giving him his best chance of becoming a world champion, he decided to make a choice.

“I told my coach (Marc Montoya) when I left MMA, 'I just don't see myself being a world champion in MMA, but I see myself being a world champion in kickboxing,'” Jacoby recalled. “That's when I began kickboxing full-time, and sure enough, I got that opportunity to fight for a world title, I came up a little bit short against one of the best there is in Simon Marcus, but I had made it there.”

To most, that would be enough, and there’s nothing wrong with that. But in June of 2019, Jacoby returned to MMA with a decision win over Cody East, and a little over a year later, he earned a UFC contract by defeating Ty Flores on Dana White’s Contender Series. In his second stint in the promotion (he went 0-2 in the Octagon in 2011-12), “The Hanyak” is 5-0-1 heading into a Saturday bout against Da-un Jung. And, at 34, his earlier views have changed significantly.

“As I sit here today, I think back on that, and it's weird because I didn't think it then but now, I do think it,” he said. “I've been through the ringer, and I feel like I really can be a champion and I can compete for that title.”

He’s got good reason to feel that way. If he extends his unbeaten streak to seven this weekend in Long Island, that’s a run that’s hard to ignore, and after his most recent fight (and win) over Michal Oleksiejczuk, he earned his first Top 15 ranking. To some fighters, that’s not a big deal. To Jacoby, it is.

“I thought it was really cool,” he said. “Especially the journey that I've had. I've had a long career, getting to the UFC a decade ago and getting booted after two fights and the ups and downs and the travel, and just what it took to get back, to be able to get back and reel off a bunch of wins like I have and to get into the Top 15, it meant a lot to me. And it means a lot to me right now, and it will going into this fight. I know this guy is really good, and they're wanting to push him a little bit and give him an opportunity to climb into the rankings, and I've got to defend my spot and continue to climb the ladder and make my way towards the top.”

Jacoby wanted to continue that climb earlier than this weekend, but early in the March matchup with Oleksiejczuk, he injured his left hand. Not that it stopped him from throwing and landing it for 15 minutes. That’s just how fighters like Jacoby are made.

“I'm such a vet now and I've been through it,” he said. “It's more of a shocker when I get through a fight and I'm not injured. That fight with Darren Stewart was a pleasant surprise. Even the fight after that, when I fought John Allan in New York, I'd thrown quite a bit of kicks that fight and my legs were pretty sore and beat up and I had to let those rest for a few weeks, but it's just part of the game. It's part of what we sign up for and I was just thankful that I didn't require surgery.”

That means despite tearing a sagittal band in his finger, he kept going. That adrenalin must be something. 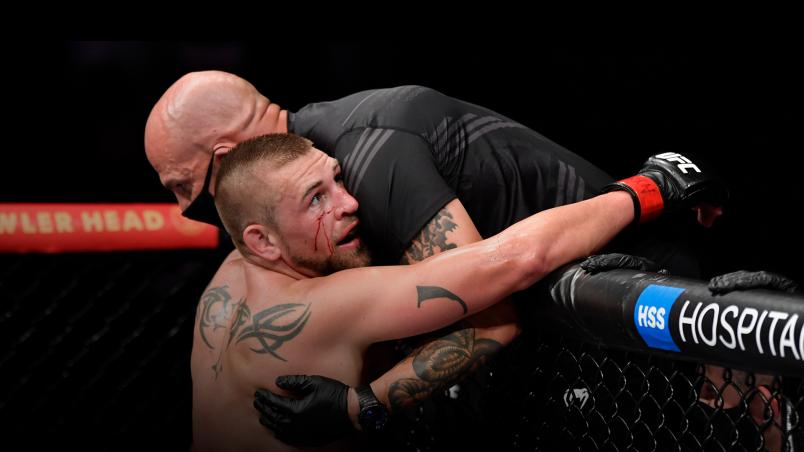 Dustin Jacoby reacts after the conclusion of his light heavyweight fight against John Allan of Brazil during the UFC 268 event at Madison Square Garden on November 06, 2021 in New York City. (Photo by Jeff Bottari/Zuffa LLC)

“It's everything,” Jacoby laughs. “I tell people all the time, 'Adrenalin is a helluva drug,' because I never felt it once in the fight. I never threw a particular punch where I was like, 'Ouch, that hurt.' It's happened to me in a fight when I knew I broke my hand. I even broke my arm in a fight and I knew right away when I broke it. In this fight, I didn't feel anything. But after the fight, I was trying to take my gloves off, and I was like, 'I must have broken a bone in my hand.' But adrenalin's pushing you through, and I never even felt that one.”

If you’ve followed the fight game for any length of time, these comments don’t raise an eyebrow. It’s what these toughest of athletes do. But tell someone outside of this unique bubble, and the response is what you’d expect it to be.

“They look at me like I'm completely nuts, and they ask, 'Why would you ever do that?'” he laughs. “Nine times out of 10, that's the reaction that I get, but what I say right after that is it's a tough way to make an easy living. You've got to choose your struggle. My struggle is my strength and getting up and going to the gym every day and training through injuries and fighting through injuries, it's a struggle, but I choose that struggle and I own that struggle, and I'd much rather been doing that than going and working a 9 to 5 and sitting at a desk all day and being told what to do.”

A tough way to make an easy living. And it’s not for everybody. But it is for Mr. Jacoby.

“That's 'The Hanyak' - he's a whole different guy than Dustin,” said Jacoby, who wouldn’t change a thing, even if there are a few extra aches and pains in the morning after a long run in combat sports.

“You have to be a bit delusional,” he laughs. “But you gotta just continue pushing on and telling yourself you're good, even though you know you're not. I go to bed at night and get up in the morning, the first few steps are always hard, but once I get warmed up, I'm right back at it.”