Duquesnoy reveling in his return to Europe 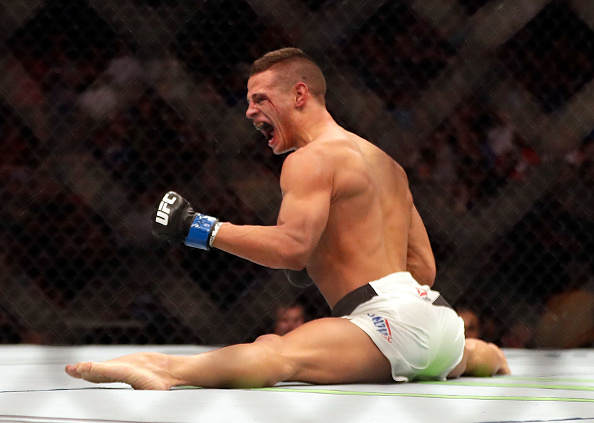 Tom Duquesnoy is back in Paris. Why?

“Why not, that is the question,” laughs the bantamweight prospect, whose call from the UFC to face Terrion Ware this Saturday in London coincided with his time in France, prompting him to decide to stay at home for training camp.

“Europe and the U.S. both have their strengths and weaknesses, and one of the strengths of having a camp in Paris is being around the people you like and also having the benefits of the striking level,” said Duquesnoy, who usually prepares for fights with the Jackson-Wink MMA team in Albuquerque. “In France we have some of the best striking level in the world, especially in Muay Thai, French Savate and boxing.”

So while he still represents the Jackson’s crew and will be returning to New Mexico in the future, Duquesnoy has embraced his time in Europe, as it offered him a reminder of those early years when he was making a name for himself in the sport.

“It reminds me of good times,” he said. “Not that it was a bad time for the last camp, that was an amazing time too, but it’s more that there’s a sensation of being at home and close to the people you like and fighting at home. London is not far, so it’s a good location for my European fans and people from France and England to see me in the cage. Usually for them it’s a big trip, and now it’s an occasion for them to easily see me.”

Seven times Duquesnoy has appeared in England, going 6-0 with 1 NC, finishing each victory. It was there that the buzz about the “FireKid” kicked into high gear, and fighting in the country for the first time as a UFC fighter is a big deal for him.

“It will be the continuation, the next chapter in the book,” he said. “It’s a delightful pleasure to fight in front of my audience. The English people have received me really well since the very beginning of my career. They’ve always been very respectful, even when I was fighting against English fighters, and it’s a pleasure for me to give them back everything they gave me by giving them a good show.”

Speaking of books, Duquesnoy is almost done with the one he is writing, and he expects to finish during a 10-day cruise in the Greek Islands after the fight. Yes, at just 24 years old, Duquesnoy is taking in everything life is presenting him.

“It’s hard before every fight and it’s like going through hell,” he said. “I don’t like to call it hell because it’s a pleasure, but for after, it’s receiving the benefits of all the hard labor.”

My main weapon, my pleasure, my goal, my passion, is MMA

There has been no shortage of that hard labor in the lead-up to his battle with Ware, one in which he hopes to rebound from his first loss since 2013, an October defeat to Cody Stamann.

“It was a split decision, so it was a close fight against a tough opponent,” Duquesnoy said of the loss. “People like to say what doesn’t kill you makes you stronger, but rare are the people who mean it. So thanks to my last opponent, I was able to bring my level to a different one, and I really do think that bad news can definitely give you the best future. The more you can take from a defeat and come back better, that’s exactly what I took from the last fight.”

“My main weapon, my pleasure, my goal, my passion, is MMA,” he said. “I’m just going with the flow, respecting the different steps in life, step by step, and we’ll see the result.”