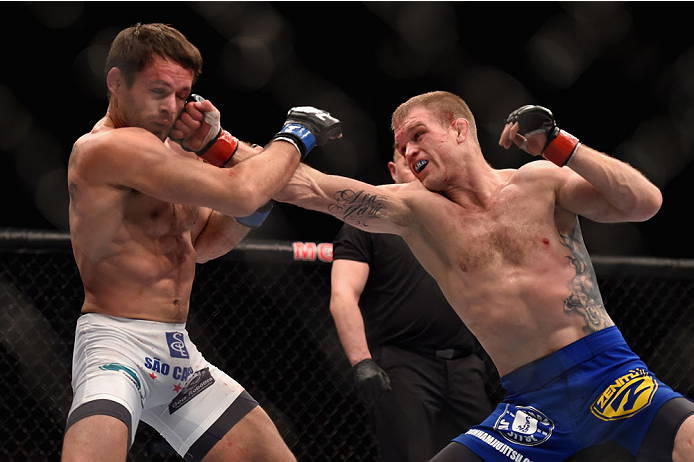 On Evan Dunham’s last business trip to the United Kingdom in 2009, he was an unknown and unbeaten prospect who was on the receiving end of a little trash talk from European veteran Per Eklund before stepping into the Octagon for the first time in London’s O2 Arena.

Two minutes and 13 seconds after the fight started, it was over. Dunham by knockout. Six years and 13 more UFC fights later, the Las Vegan returns to the UK to face Ross Pearson in Glasgow, Scotland on Saturday. Is he superstitious?

“I had a good first experience in the UFC over there and I’m looking forward to heading back over there and getting another big win,” Dunham said. “I definitely know it’s been a while, but time flies when you’re having fun.”

He chuckles, knowing that even though the last six years have had their share of fun, there have also been some not so pleasurable moments, from crushing knockout defeats and bad decisions, to a three-fight losing streak he snapped in January with a win over Rodrigo Damm.

“I definitely needed it (the win over Damm) real bad, and I was happy to get in there and put on a good fight,” Dunham said. “I thought I grew a lot as a fighter in the last few fights, and luckily I was able to go in there and show how much I’ve grown.”

The fact that three losses in a row didn’t get Dunham his walking papers showed even more about the 33-year-old and his place on the UFC roster. Win or lose, the soft-spoken veteran always shows up to fight, and his tendency to put his high-level technical prowess on the shelf in search of a brawl once the fists start flying has made him a fan favorite in the process.

“I think I’m a pretty reliable fighter, meaning that they (the UFC) know that if they put me in there, I’m going to give it everything I’ve got, and I’m never going to shy away from a fight,” he said. “And the vast majority of my fights are exciting to watch, and I think they recognize that and know I’ll put on a good show. That’s what my number one priority is, to go in there and perform at my best and try to get that win every single time.” 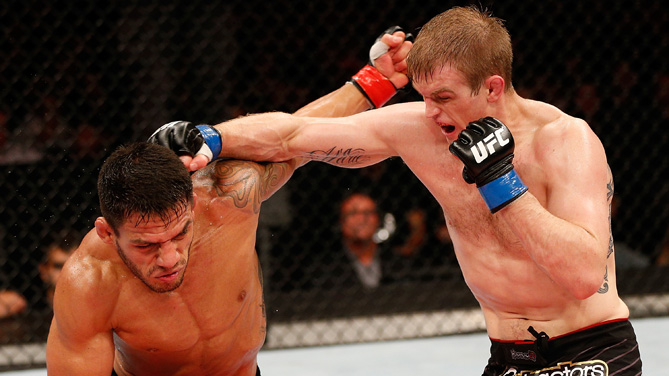 Rafael dos Anjos in their lightweight bout during the UFC on FX event on May 18, 2013 at Arena Jaragua in Jaragua do Sul, Santa Catarina, Brazil. (Photo by Josh Hedges/Zuffa LLC)" align="right" />The Damm fight put Dunham on the right track again, and though an 8-6 Octagon record is spotty, he doesn’t need to look any further for inspiration than current lightweight champion Rafael dos Anjos, who bounced back from his own ups and downs to win the world title earlier this year. Add in the fact that Dunham lost a close decision to RDA in May of 2013, one a lot of people think he won, and it shows that if he’s chasing a world title, there is a light at the end of the tunnel.

“I’m always happy for guys that achieve success,” he said. “I’m not of these guys that hates somebody because they are where I want to be. So good for him. I definitely have more respect for the guys who have walked a broken path, so to speak, as opposed to the guys that just came up and got to the top right away. It gives me a little encouragement. I would love to have that fight back and I hope to get it someday.”

First though, he has to get by Pearson in a co-main event bout that could very well steal the Fight of the Night bonus, given the style of both combatants. Dunham doesn’t disagree.

“It’s two guys that have been around for a while and they like to go in there and bang it out and put on a show,” he said of the bout. “I think it’s a good matchup. It makes for an entertaining fight, and I think that’s why we got the co-main slot, because it’s pretty much guaranteed to be a good fight, no matter what happens. There’s no secret to what he wants to do; he’s going to want to stand and bang, and I’ve shown in my past that I’m more than happy to oblige guys like that.” 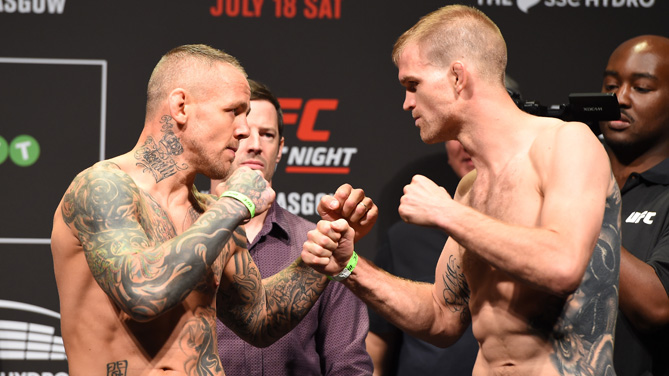 So will the Brazilian Jiu-Jitsu black belt listen to the little devil on his shoulder telling him to bite down on his mouthpiece and slug it out with the British knockout artist, or will he stay calm and stick to the game plan?

“I think that (sticking to the game plan) is part of me growing in the sport, but there’s always a time and a place for him to come out and make an appearance,” Dunham laughs, content in the reality that in fighting a UK native he may be the bad guy tomorrow.

“Oh yeah, I’m planning on going across the pond to ruin somebody’s day.”