"I think every one of these guys wants to take an opportunity to showcase
their skills and get their name where they need to be. They all want to
dominate." - Duke Roufus 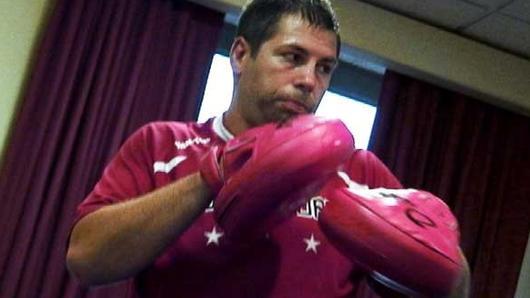 He’s the MMA Mayor of Milwaukee, but when the UFC visited his hometown for the first time in 2011, Duke Roufus had the night off.

“I actually went and enjoyed the show,” said the former kickboxing great and current renowned trainer of several UFC fighters. “It was a great card and it was fun. This one is a different kind of fun.”

This one, UFC 164 in Milwaukee this Saturday, is a different kind of fun for Roufus because this time he’s working, coaching and cornering four of his fighters on the card, including main eventer Anthony Pettis.

“I’ll be warming up in the locker room, running out, switching shirts, running back and forth, but that’s what I do,” said Roufus, who has no problem with any of the above. “And I see a special motivation in all our guys’ preparation for this fight. Each of them has their own particular reasons why they’re motivated. First, there’s a connection with the community, and the other one is just the opportunity to showcase themselves with the spotlight on them. That’s what this sport’s all about. What makes people special is when they can do it when the chips are down.”

Leading Pettis, Erik Koch, Pascal Krauss, and Chico Camus into battle this weekend, Roufus might be the busiest man in the sport at the moment, but the way he describes it, having four fighters on one card is an easy night’s work compared to some he’s had in the past.

“It’s wild, but we have big events here all the time where numerous guys fight, so I’m just used to it,” he said. “It’s something we do here. We’ve got a great coaching staff, and all the other coaches on the team and all the other athletes - when they’re not fighting - rally around the other guys, and it’s really easy to do it here in Milwaukee. If it were four guys on the road, I’d have to say it would be a lot more difficult, but being here in our home base, it’s pretty easy. It’s just another night for us. Grace under pressure is practiced often, and we’re used to having a lot of people there. I get a lot of attention, but we have a great crew of guys here and the strength of our team is our unity. We’re not the biggest team around or the most famous, but we like the way we are, we’re very close knit, and because of it, these types of situations are a little bit easier for us.”

Roufus is obviously humble to a fault, but to bring one fighter to the big dance is impressive; four is something even more special. And what may be the biggest compliment you can pay the 43-year-old is that each of his fighters is his own man. The Roufusport gym isn’t turning out Roufus clones or Pettis clones. Each fighter maintains his own style, with even newcomers like Germany’s Krauss keeping their own identity while picking up enough new wrinkles to their game to take things to the next level.

“Having been in the shadow of my older brother (Rick) and some of the other fighters I was behind growing up, one thing I think I’ve learned as a coach is that each fighter has a different way of preparing and thinking,” said Roufus, whose 36-8-1 kickboxing slate included 26 knockouts. “I like getting to know the guys well because I feel like in between rounds we’re in the foxhole together. I feel like it’s World War I – I’m the guy who blows the whistle and he’s got to run out of the trench while I get to stay in the trench real safe and they’re out there taking the fire. But to be able to relate to these guys, if you take the word ‘art’ from mixed martial arts, I think each guy should be given his right to express his way to fight. Each one has his own nuances that make them a special fighter. I definitely am not telling every guy to be Anthony Pettis “Showtime” kicking, but the neat thing about Anthony Pettis is that I think the “Showtime” moves have been incredible, but he’s evolved so many other parts of his game. Another guy who has shown dramatic improvement and I’m excited to see him unleashed is Pascal Krauss. Since he’s moved here I’ve had the time to really get to know him, and knowing a fighter’s personality is knowing what makes them fight and tick, and you can help them build their game around that.”

That may be Roufus’ biggest strength, knowing that when you’re dealing with individuals, it’s of primary importance to allow them to keep that individuality intact.

“They’re grown men, they’re fighters, and they’re tough gladiators, and what I try and do is be like a good NFL coach,” he said. “You can have this great quarterback, but the coaches who put restraints on their quarterback don’t get the results that they want. I let these guys audible. At the end of the day, it’s their career, and I’m there to help them. I’m not there to do everything for them, and that’s what makes these guys special. That’s the growth of training and that’s the joy of it, seeing them develop as their own men, so to speak. At the end of the day, the greatest fighters are able to stand on their own two feet.”

So what constitutes a successful night for Roufus? Is it a 4-0 night, a championship for Pettis, or each of his fighters giving an honest effort and producing a performance to be proud of, regardless of the end result? Not surprisingly, Duke wants more.

“They’re training to dominate,” he said of his Fab Four. “There’s going to be blood that night. I don’t mean blood literally, but figuratively. That’s what the fans want here and that’s what they want for themselves. I think every one of these guys wants to take an opportunity to showcase their skills and get their name where they need to be. They all want to dominate, and I haven’t seen a hunger with that many fighters at one time in a while. They gotta go out there, cement their name, and create a legacy.”

They do that, and that’s a really fun night for Duke Roufus.