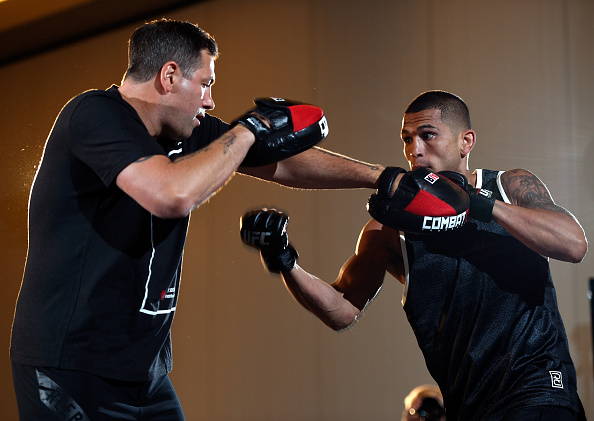 Anthony Pettis spars with coach Duke Roufus during an open workout session for media and fans at the Hyatt Regency Vancouver on August 25, 2016 in Vancouver, Canada. (Photo by Jeff Bottari/Zuffa LLC/Zuffa LLC via Getty Images)" align="center" />
The text on Sunday morning meant everything to Duke Roufus. He knew he did the right thing the night before when he didn’t let Anthony Pettis out for the third round of a UFC 229 fight against Tony Ferguson due to a broken hand. But hearing from Annette Garcia confirmed it.

“His mom texted me the next morning, thanking me for protecting her son,” said Roufus. “That’s the most important thing that goes through my mind. We’ve done a lot of winning, and I’m not saying we don’t want to win, but I’m at the stage of my life where I want to make sure that I’m happy and I don’t know – even if he would have won the fight with a broken right hand – if I would be happy with him sustaining a lot of damage to do it.”

Ferguson vs Pettis contained everything fight fans rave about when it comes to blood and guts, heart, thrilling exchanges, and top-notch technique. And it was done at frenetic pace throughout the ten minutes it lasted. But as Pettis walked back to his corner after a second round that will be hard to top as Round of the Year for 2018, the Roufusport head coach sensed that something was wrong and Pettis confirmed it: the right hand that almost finished Ferguson was now broken.

This duo had been here before. If you fight for any length of time, you will have these moments. And Pettis had more than his share.

“You only have so many times you can gut check yourself to win,” Roufus said. “He did it on our promotion when he was younger. He separates his shoulder, he gets up with the separated shoulder and he finds a way to knock that guy out. We tried it with (Rafael) Dos Anjos – it did not work. We said let’s hang in there and go for it because it’s a title fight.”

That night in 2015, Pettis took a shot from Dos Anjos early in the first round, and he never got back into the fight, though it was not from a lack of trying. But Roufus remembered that fight – and that punch – clearly.

“That was the blow that took us to the hospital that night with a cracked orbital,” he said.

A little over two years later, Pettis would suffer a cut in training three weeks before his fight against Dustin Poirier. Pettis refused to pull out, yet not surprisingly, the blood flowed early and often as soon as the exchanges heated up.

“Anthony’s not a crybaby,” said Roufus. “He’s a very proud man and I love him for that. He doesn’t cry, he doesn’t complain, and he wins and loses with a lot of character and dignity. But for me as his coach and his friend – we’re lifelong friends and I’ll always be close with him – it was horrifying to watch that, knowing how it happened. So I can’t go through that anymore.”

So the die was cast. But while the compassion of a coach for his injured fighter was a factor in his decision, it wasn’t the only one.

“There were other circumstances, and it’s a stylistic reason why you’ve got to stop the fight,” he said. “When you’re fighting a guy like Tony, there’s only one thing you can do against a bigger guy who’s good at elbows – you gotta be able to punch him. And if you can’t punch a guy who has good elbows, you’re in a big mess.”

That mix of emotion and practicality is why Roufus is well-established as one of the best – and most respected – coaches in the sport. It’s also something you can’t learn from the sidelines.

“I’ve caught the same beatings he has,” Roufus, one of the top kickboxers of his era, said. “I was a fighter who’s been on the wrong end of a fight. Not that he was on the wrong end of this one, but if you don’t have the full capacity to win a fight, you shouldn’t fight. I broke his heart stopping that fight. But once that hand was hurt, it was a problem. In boxing, kickboxing, Muay Thai, you’ve got a three-minute round. You can jab and grab. Grab, hold, the ref will break you. That doesn’t happen in MMA. The action keeps going, for the most part. So not only are you compromised from punching the guy, you’re compromised from grappling with him, and now any hopes and dreams for Anthony pulling out a submission out of the magician’s hat is gone. It was a hard decision, but at the end of the day, Anthony’s enthusiasm is higher than it’s ever been, believe it or not, even after the fight. He wants this more than he’s ever wanted it, so do we roll the dice to try and pull it out? That’s a big try.”

Yes, the loss stung, but Pettis earned a Fight of the Night bonus, his stock didn’t drop one ounce, and he lives to fight another day. It’s not a win, but it’s as close as you can get to one without having your hand raised. And these days, that’s good enough for Duke Roufus, because now they get another shot at it – this time with all their tools intact.

“I consider myself not only just a coach, but a fulfiller of dreams,” he said. “I try to help these guys manifest the impossible. I’m sorry, I’m a sap for ‘nothing’s impossible’ Muhammad Ali speeches. I wasn’t supposed to be as good as I was (as a kickboxer), but I was an overachiever, so I believe in the power of the human spirit.”