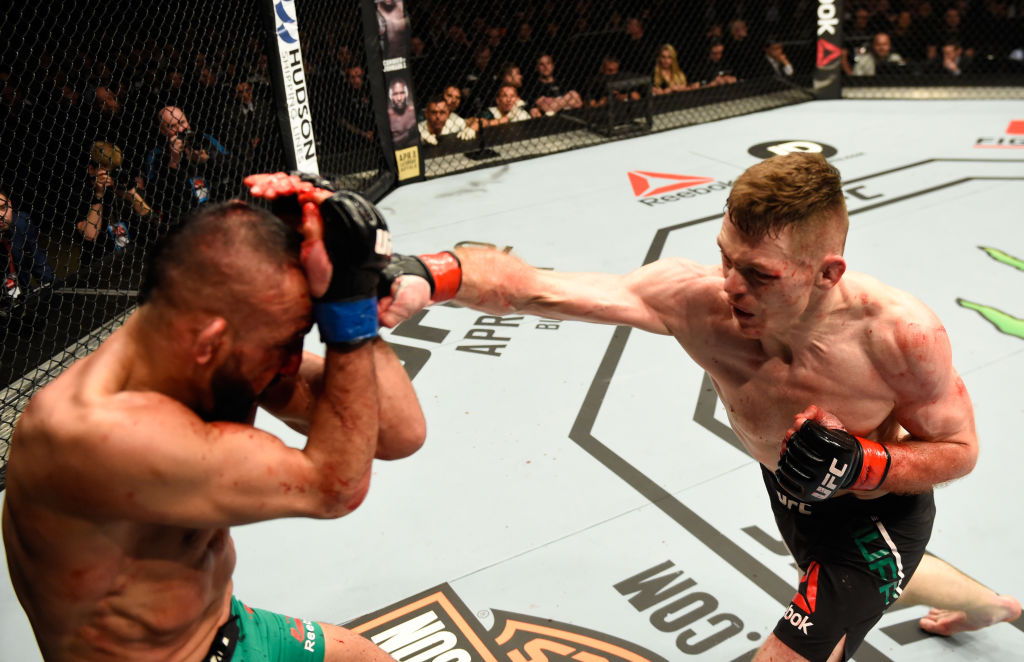 Back in the Octagon for the first time since July of last year, lightweight up and comer Joe Duffy got in some rounds on Saturday en route to a shutout three round unanimous decision win over Reza Madadi in UFC FIGHT NIGHT action at the O2 Arena in London.

Madadi was able to put Duffy on the mat early in the fight, but when he gave up position in order to slam the Irishman down, Duffy reversed position and changed the momentum of the fight, opening a cut on Madadi's forehead that bothered the "Mad Dog" for the rest of the fight.

And once standing, Duffy put on a clinic, with his speed, dynamic attack and accuracy never giving Madadi a chance to get back in the fight.

Emotions were running high in the lead up to the light heavyweight rematch between Francimar Barroso and Darren Stewart, but their three rounder was fought at a measured pace, with Barroso picking up a win via unanimous decision.

London's Stewart got off to a good start thanks to a slick takedown and solid clinch work, but a series of takedowns by the Brazilian slowed Stewart's work rate down and allowed Barroso to use his experience to take the fight over down the stretch. 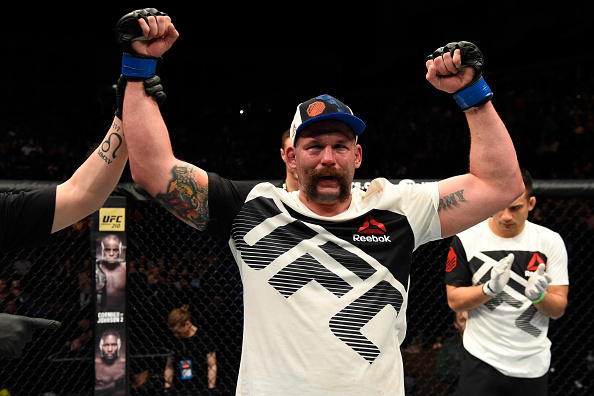 The pattern of the fight was established early, with the faster Omielanczuk having success when able to use a stick and move strategy. But when Johnson was able to bull him into the cage and use his size to dominate, the Warsaw product was simply overmatched physically, and it was this strategy that led the American to victory.

After getting rattled by Edwards' first left hook, Luque did his best to make the fight a grappling match, and while he had success in the first frame, Edwards controlled the action in round two, and in the third, it was the striking of "Rocky" that put him ahead for good.

If there's such a thing as a flawless victory in MMA, unbeaten lightweight phenom Marc Diakiese got one, as he knocked out Finland's Teemu Packalen in 30 seconds.

Starting the fight off with a series of kicks, Manchester's Diakiese had Packalen thinking about those kicks when the "Bonecrusher" fired off a flush right hand that put Packalen down and out, with referee Neil Hall stepping in immediately to halt the contest.

Countrymen Brad Scott and Scott Askham fought like bitter enemies in their middleweight Battle of Britain, with Scott pulling out a close, but unanimous, decision

Melksham's Scott (12-4) put it on Doncaster's Askham (14-4) in the first round, dropping his foe with a right hand while scoring big with kicks to the leg. Askham adjusted well in the second and had his best round of the fight, only to get visibly wobbled by more low kicks. But by the end of the round, the two were trading on even terms and the crowd loved it, with the third round a tough one to call as they battled back and forth for the final five minutes.

Swedish bantamweight Lina Lansberg repeated her victory over the Czech Republic's Lucie Pudilova in the opener, but this was no walk in the park for Lansberg, who held off a furious third round rally from the Octagon newcomer to win a three round unanimous decision.

The first round featured some solid clinch work from both fighters, but the action really heated up in the second, as Lansberg varied her attack and even scored a takedown.

But in the third, Pudilova got her second wind and she battered her foe, bloodying Lansberg and raising a nasty welt around her right eye. Lansberg did make it out of the round though, with her early lead securing the win.