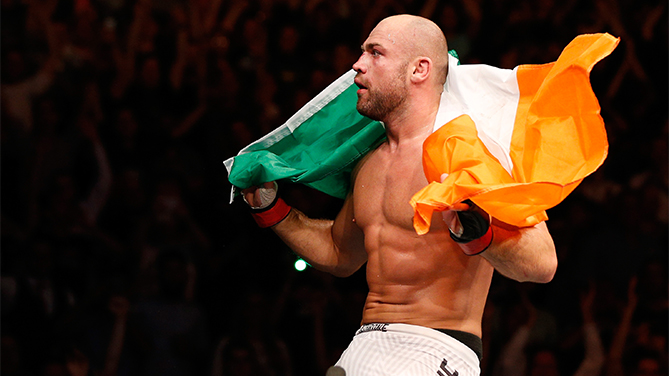 The Ultimate Fighter 19 teammates Cathal Pendred and Mike King fought like mortal enemies in their UFC Fight Night prelim bout at the O2 Arena in Dublin, Ireland Saturday, and after nearly being finished several times in the stirring middleweight showdown, it was Pendred, the hometown hero, roaring back to score the second-round submission finish.

“Work hard and believe, and you can achieve anything,” said Pendred, who was in the crowd five years ago when the UFC first visited Dublin. What a difference five years can make.

With the crowd roaring, Pendred rushed King at the start, the American responding with a thudding takedown. Pendred got up immediately, and the two began throwing, King scoring well with punches, kicks, and the occasional knee. 90 seconds in, Pendred got a takedown, King bouncing up quickly, and moments later he put Pendred in serious trouble with a right hand that dropped the Dubliner to the mat. King went all out to get the finish, from ground strikes to submission attempts, but Pendred wouldn’t cave in. Finally, with a minute left, Pendred found daylight and got to his feet, the crowd roaring and chanting for their man, who made it out of the round.

Picking his shots patiently, Pendred clipped King with several right hands in the second, seemingly with his legs back under him. In the second minute, Pendred scored a takedown, but King scrambled his way back to his feet and nailed his foe with two kicks to the head. Pendred responded with another takedown, taking King’s back. In just seconds, Pendred sunk in a rear naked choke and King went to sleep, the end coming at the 3:33 mark.

Dublin flyweight Neil Seery took the hard road to the UFC, and in his second Octagon bout, he picked up a victory to remember, avenging a 2010 loss to Phil Harris by decisioning the Brit via unanimous decision.

Harris implemented his game plan well in the early going, staying out of Seery’s punching range while seeking the takedown or lock-up when it was available. The tenor of the fight changed two minutes in though, as Seery dropped Harris with a hard right hand. The Portsmouth native was able to clear his head quickly, but from there, it was Seery who was pushing the pace of the fight as he stayed off his back and landed even more bombs in the first five minutes.

Harris (22-12, 2 NC) was able to get the takedown in round two, but Seery’s defense was rock-solid, allowing him to get out of potential danger and back to his feet immediately. Once standing, it was Seery’s striking again leading the way, and his confidence was evident as he marched forward. Seery even put together two takedowns before the end of the round, adding to his lead.

It was more of the same in round three, Seery (14-10) in charge of the action, rocking Harris with a right hand midway through the round and in the final minute, and just putting together what he will likely look back at as the most important win of his career. 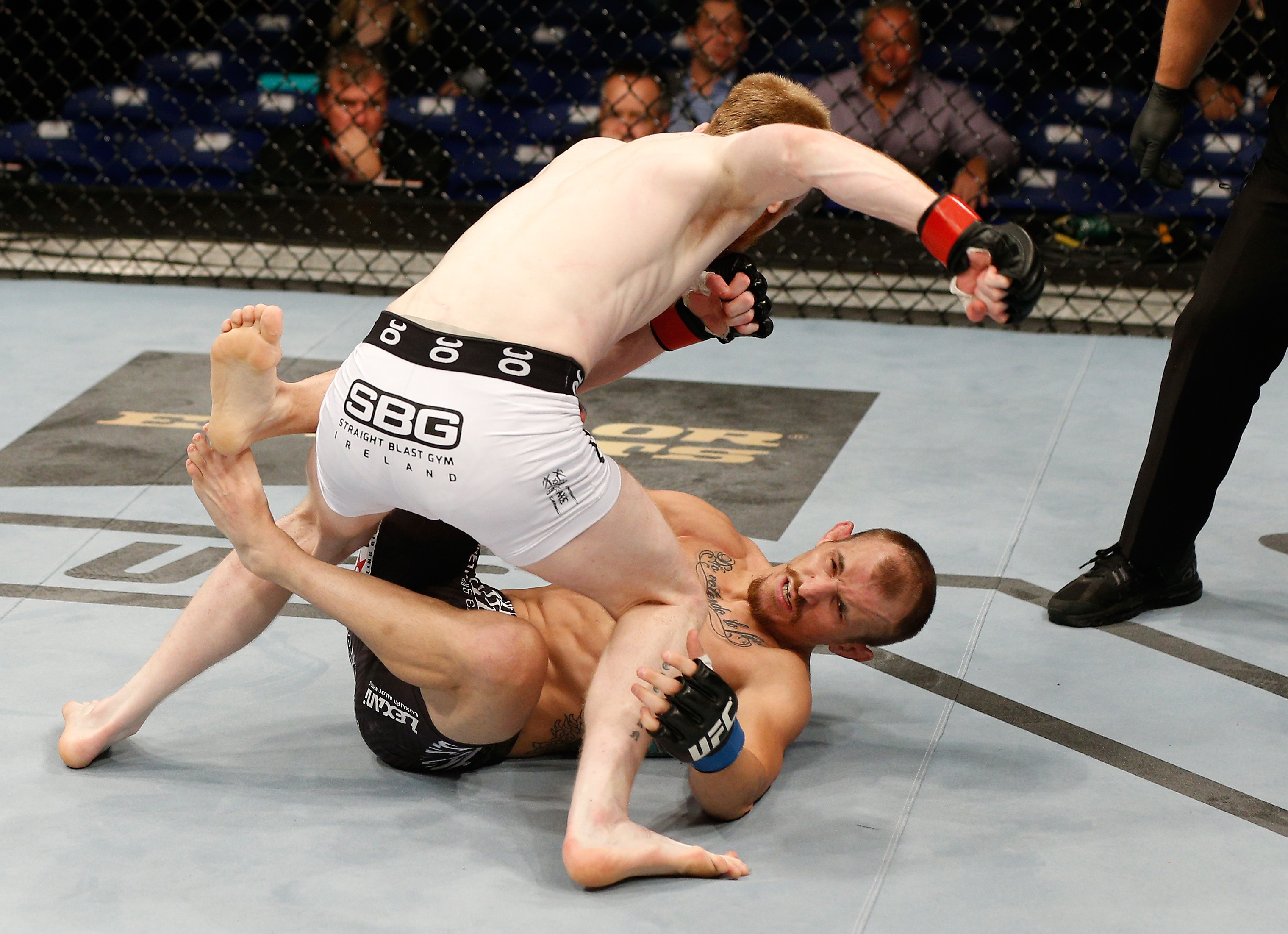 with a
first-round submission of Josh Sampo in the flyweight opener.

With
the crowd already making their presence known, the hometown favorite
wore off any nervous energy with a busy striking attack, and once he
settled in, a right uppercut knocked Sampo to the mat and nearly
finished the fight. Sampo recovered, nearly catching Holohan with an
armbar, but the Dubliner escaped, took Sampo’s back and sunk in a rear
naked choke that produced a tap out at the 3:06 mark. Not surprisingly,
the crowd erupted, and rightfully so.

Latifi’s leg kicks did damage quickly, the kind of welcome the late-notice newcomer didn’t want, and it just got worse from there. After eating another kick that sent him to the deck, Dempsey jumped up and tried to recover as Latifi rushed him, but a right hand sent Dempsey down and out, with referee Leon Roberts intervening at 2:07 of the opening stanza. 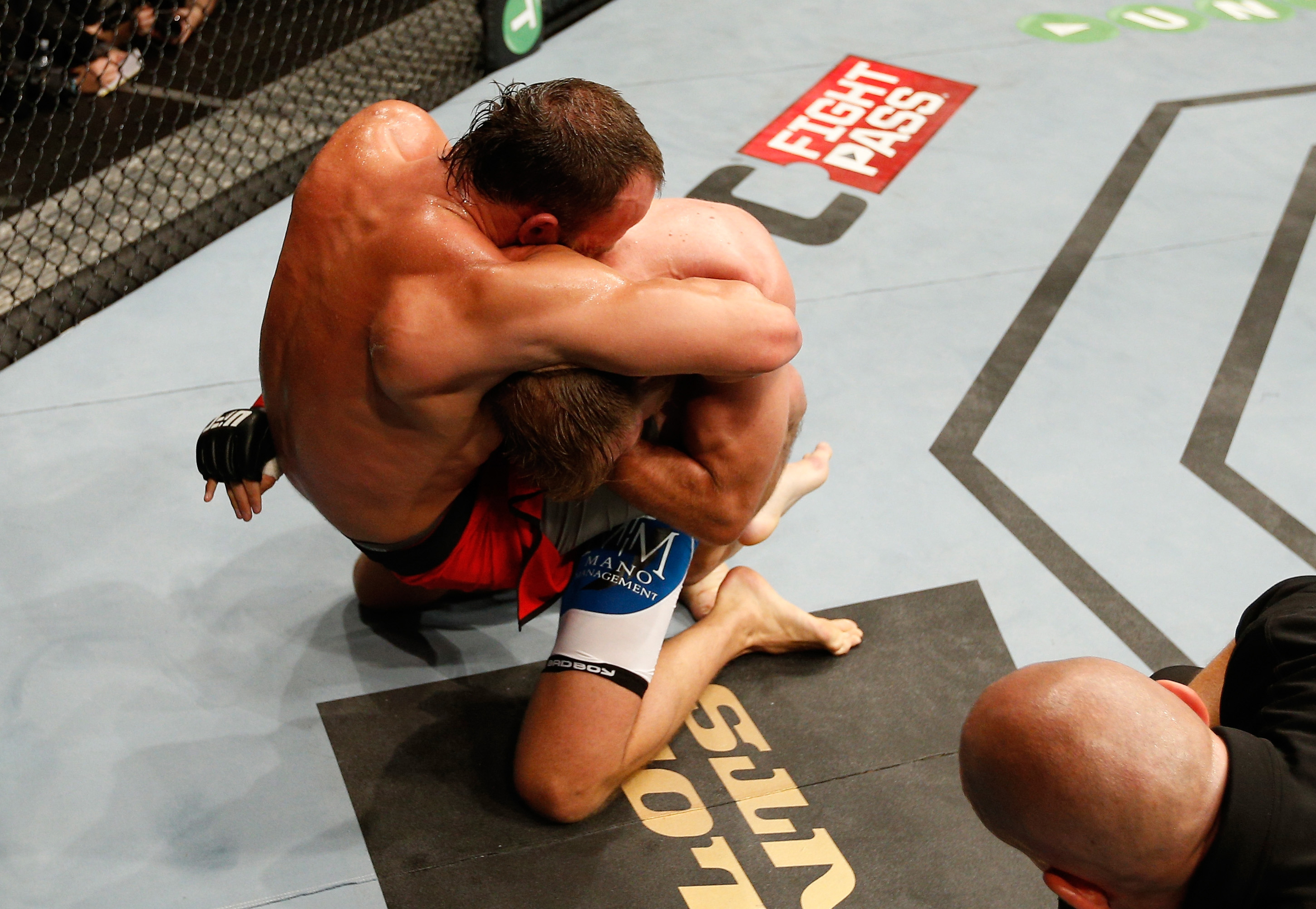 The first five minutes were competitive and grueling, mainly fought on the inside against the fence. Both fighters had their moments at close range, and even at distance it was hard to separate the two, as Troeng’s punches were effective and Smith’s leg kicks were equally so.

Troeng (16-6-1) began the second with a takedown, but Smith was able to scramble his way into the top position, and he maintained that position until Troeng got back to his feet with 90 seconds left. The Swede looked for a takedown in the final minute, with Smith opting to pull guard and seek the guillotine choke finish. He nearly got it, but the horn intervened to rescue Troeng.

The solid ground work from both men continued in round three, each man scrambling to take the upper hand, but as the round progressed, it was Smith taking the lead and holding it, securing the points victory.

Ukrainian prospect Nikita Krylov picked up his first win at 205 pounds, stopping Cody Donovan in a back and forth light heavyweight scrap.

In a start reminiscent of his loss to Ovince Saint Preux, Krylov was in immediate control but almost 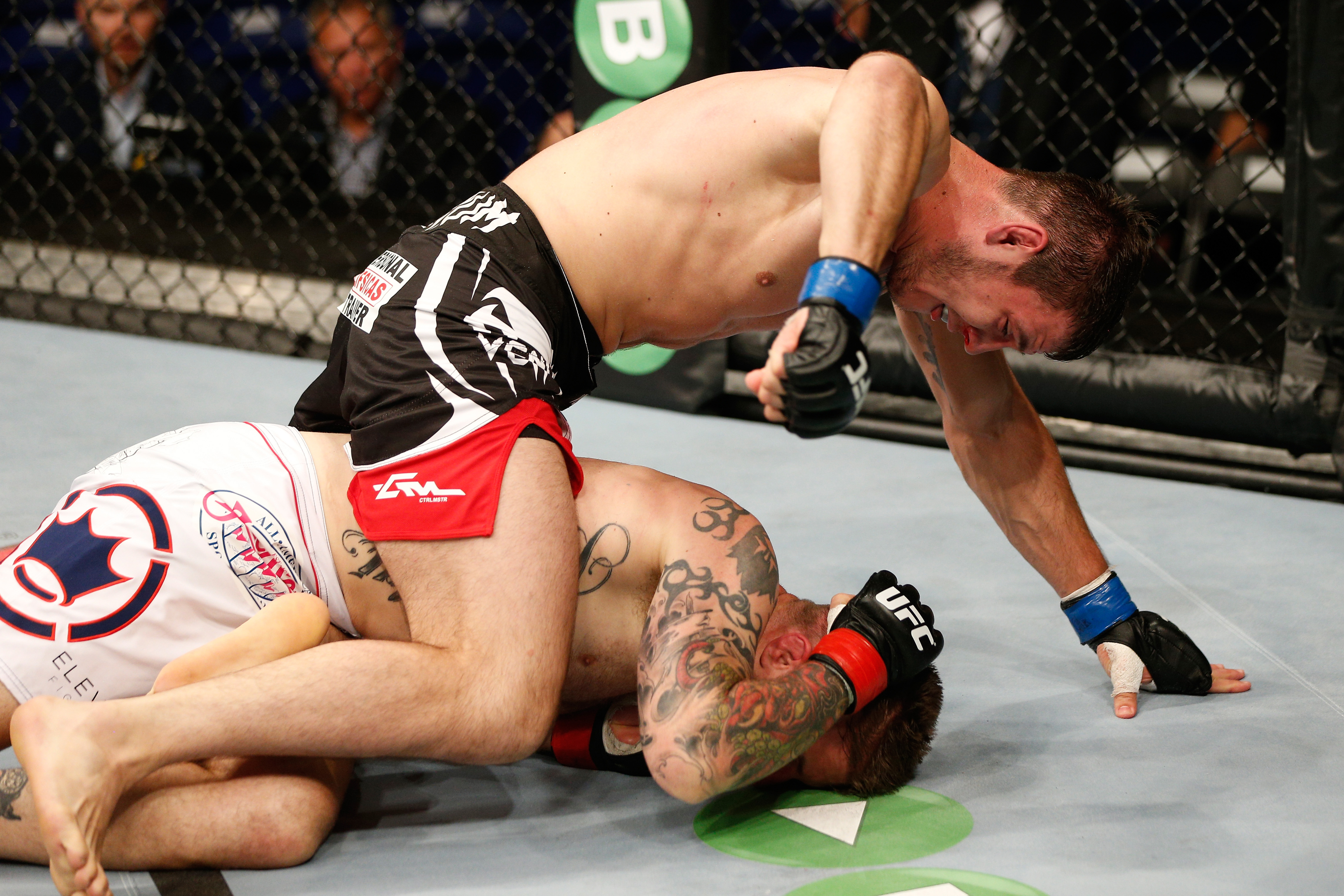 got finished, this time by a Donovan armbar. But in a reversal of that previous bout, Krylov escaped and continued to keep the pressure on. The two light heavyweights slugged it out to the delight of the fans, both before and after a brief break due to a low kick by Krylov, and with under two minutes left, Donovan began to take over, dropping Krylov and then taking the mount. Krylov turned to escape and nearly got caught in a rear naked choke, but in the process of escaping he reversed position and then began firing off ground strikes with no response from Donovan, prompting referee Marc Goddard to stop the bout at 4:57 of the first round.

Head over to UFC FIGHT PASS to watch the main card!