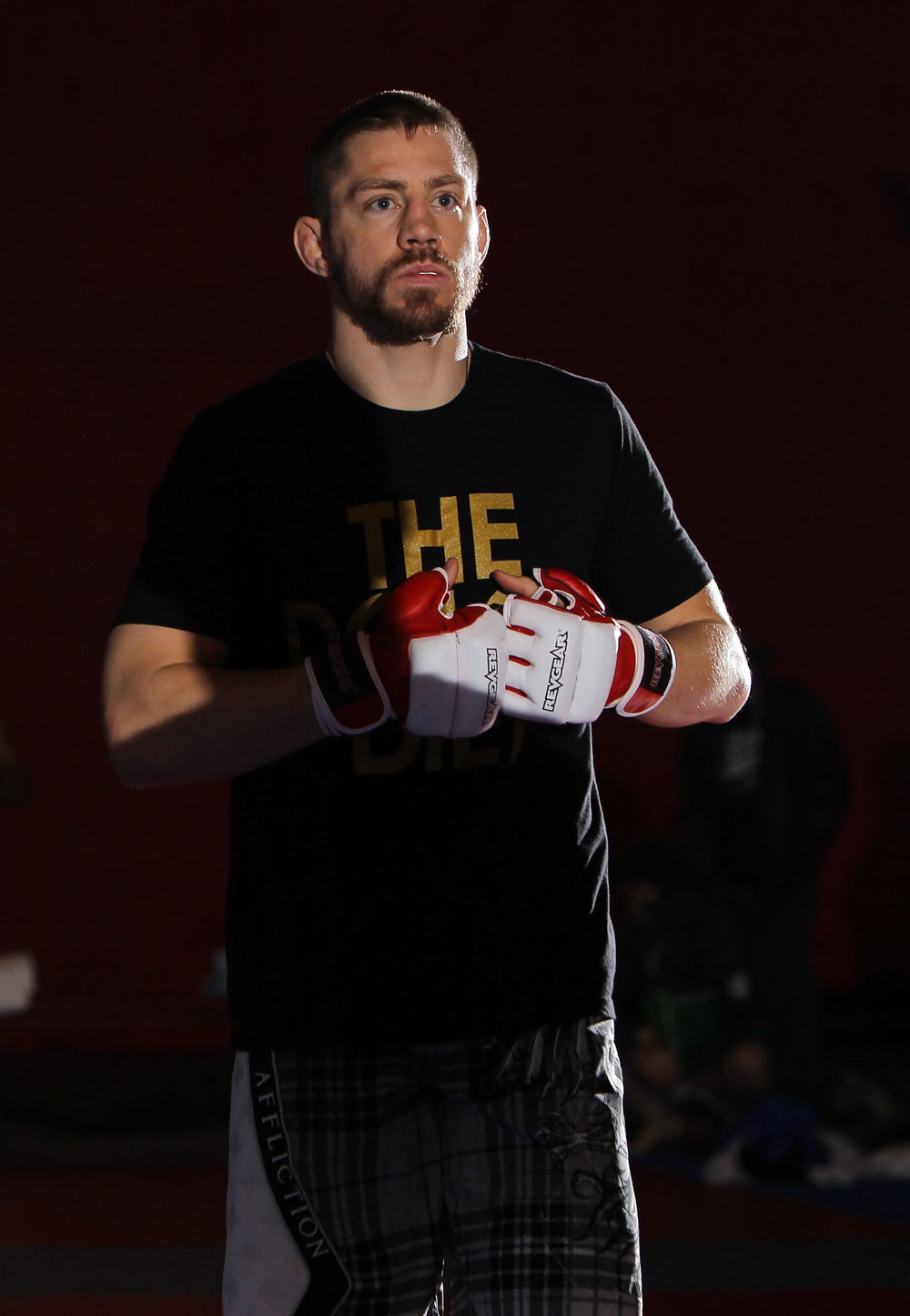 On April 20th, a powerful statement was made by three members of Team Alpha Male and it was directed at the champions in their respective divisions. It didn’t sound like a pin dropping in a quiet room; it was more like a “BANG”. And, the message was clear, ‘we’re coming for your belts.’

At UFC on FOX 7 in San Jose, California, three members of the premier lighter-weight fight team from Sacramento entered the Octagon with bad intentions in their minds and their fists. This extra fuel in their fire or je nais se quoi in their jabs is being widely attributed to the addition of a new head coach: Duane “Bang” Ludwig. It’s only been four months in the making, but the proof is in this punchy pudding - three fights and three KO/TKO wins.

“I was sure that they would win the fights, but not sure they would run through them,” admits Ludwig. “I thought they would win with strikes from breaking down the footage and knowing what great athletes these guys already are going into the cage. I wasn't sure what round, but that was going to happen regardless.”

Under the watchful eyes of the former K-1 kickboxer, father of two, and UFC welterweight with a pro career of 29-14, the featured fearsome fivesome from Team Alpha Male are undefeated, starting with Danny Castillo’s unanimous decision win over Paul Sass in February. Since that bruising bout of ground and pound from “Last Call” on the British submission specialist, “Bang” has prepared and cornered Urijah Faber to two wins, Joseph Benavidez to one win, Chad Mendes to one win, and TJ Dillashaw to two wins. Minus Castillo’s very decisive victory, the rest have been finishes, with two choking subs by Faber knockouts for Benavidez, Mendes, and Dillashaw.

“I put the information in their head and they put it into motion to tighten up the gap - and they're doing it,” explains Ludwig. “There's one thing to do this with regular Joes, but I have world class athletes out here. I'm going to keep what they've been doing, but add to it and close up some gaps. It's been pretty successful so far and I'm a proud papa that's for sure. Actually, I'm not a papa yet; I've only been here for four months. It's hard for me to say that they're my guys and my team because I feel like I'm stepping on some toes. I didn't build it; I'm just fine-tuning some things. I'm not going to take credit for a lot of this, but I do think I'm helping. I'm actually not doing too much because I don't want to do too much. I want to sprinkle information here and there and let them be their own athlete.”

For the uninitiated, this is not surprising that the 34-year-old Ludwig, with two decades of fighting experience, would be a natural as a head coach for Team Alpha Male. First off, he was more or less self-taught, rising up the ranks of amateur Muay Thai all the way to the elite levels of professional kickboxing. While he did work with the legendary Bas Rutten and boxing coach Trevor Wittman, Ludwig has been a one man team, cultivating fight knowledge, applying what he feels works for him, and evolving his personal style. Second off, “Bang” created a Muay Thai curriculum, which is offered in eight affiliate gyms around the country, including RFLX Training Center near Ludwig’s hometown of Denver, Colorado.

“I've always been in this position as far as head coach and helping people out with things,” tells Ludwig. “People have always gravitated towards me as a head coach no matter where I go, which is nice. With all the information I have, I can't help but to help people. The gym in Sacramento and the gym in Colorado, it's pretty much the same thing, but we have more fighters in Sacramento. I'm just making sure that they're paying attention and looking for openings, which I call the 'counter-eye'. Making sure to look for those gaps before, during, and after. It's all the same to me. I'm the same person no matter where I go. That's why I was asked to come out, because of who I am.”

Specifically, what he brings as a coach are specifics. Ludwig is a highly detail-oriented person, both in and out of the cage, and has a penchant for breaking down everything down to its minutiae. With the affiliate schools, Ludwig sends videos ranging from four to ten a week that he’s pre-recorded of exact drills, combinations, and the surrounding ideas of why and when to use them. The general public can get a taste of “Bang” Muay Thai from his core system DVD set sold on DUANEBANG.com and see a list of the gyms Ludwig’s lessons are taught at.

As for those UFC belts, it’s no secret Ludwig’s litmus test will be coaching these fighters not only to a title shot, but winning that championship. Before “Bang”, all the members of Team Alpha Male were near the top of their divisions, with Faber, Benavidez, and Mendes earning title fights. This triumvirate in particular has really only tasted defeat in big fights with belts on the line. Each of those three is championship material and it’s up to Ludwig to actualize it.

“I knew that the whole story wasn't just about getting another title shot, but getting the gold,” affirms Ludwig. “I'm here to help bridge that gap and that's what we're doing. We are going to get the gold. That's just the way it is. With Chad, we've got two things to work on. I think he'll be the first to get a title shot out of the three - Joseph Benavidez, Urijah Faber, and Chad Mendes. We'll see what the UFC says. But I don't necessarily agree with people saying you have to sit back and wait for the belt; if you want the belt you ask for the belt. You can't wait for things to come; you have to go after them. It's the same thing in the cage. If you want something to happen, you have to make it happen - you can't sit back and wait.”

Of course, Ludwig knows exactly what gaps and how many he needs to close to get Faber, Mendes, and Benavidez their belt. The latter has one thing to fix, Mendes has two, and the former WEC featherweight champion has three. Of those 3 for “The California Kid”, Ludwig is open about a fairly obvious flaw, which was the main culprit in Faber’s loss to UFC featherweight champion Jose Aldo: checking leg kicks. Ludwig’s challenge is to correct these bad habits or tendencies, both physically and mentally, through recognition and repetition.

“In Urijah's case, we all know that he has had an issue with blocking leg kicks and seeing leg kicks,” says Ludwig. “We're putting into his brain something that triggers when he's open and when the guy's open. Every position, I want them to be aware of every position they're in and it to register that I need to do this or I need to do this. They just didn't have my look on striking and mixed martial arts until I got there. I'm the equivalent of a wrestler who grinds with quality reps as a striker. My striking gets quality reps and we're getting after it. There's no lax time. I'm making sure when we're at the gym that we're not taking any breaks. We're there to work, and we get better every day. We get better every day and we get tired - those are our goals. It's pretty easy, all I have to do is put in these ideas and they're running with it - plug and play. Every day, we get better and better.”

While this already successful relationship between Ludwig and Team Alpha Male took over the post-UFC on FOX 7 talk, one thing is missing in all of this: a signed contract. “I just have to make sure this deal benefits me and my family, first,” asserts Ludwig, who at the beginning and end of the day is a father and husband with the same eye for detail about protecting them as he does with throwing counter hooks. “I'm a very strong believer in if you say you're going to do it then you do, whether it's in business or martial arts. There are just some things I want to make sure about that we're all on the same page. I want to make one or two spots my home: one in Colorado and one in Sacramento.”

It’s been a fast and fortuitous four months for the fan favorites and perennial contenders of Team Alpha Male and their new head coach Ludwig. The UFC faithful are used to seeing Faber, Benavidez, Mendes, Castillo, and Dillashaw entering the Octagon with their usual litany of great coaches like Justin Buchholz, Fabio Prado, and, most definitely, Master Thonglor to name a few and, subsequently, walking out of the cage with their hand raised. But these last few fights, the added “Bang” to their line-up, and to their strikes, has furthered the excitement and interest about Team Alpha Male, especially for the ones with UFC belts.