"I’m always up to take that gamble and those chances. That’s fun to me and it keeps me awake and alive." - Duane Ludwig 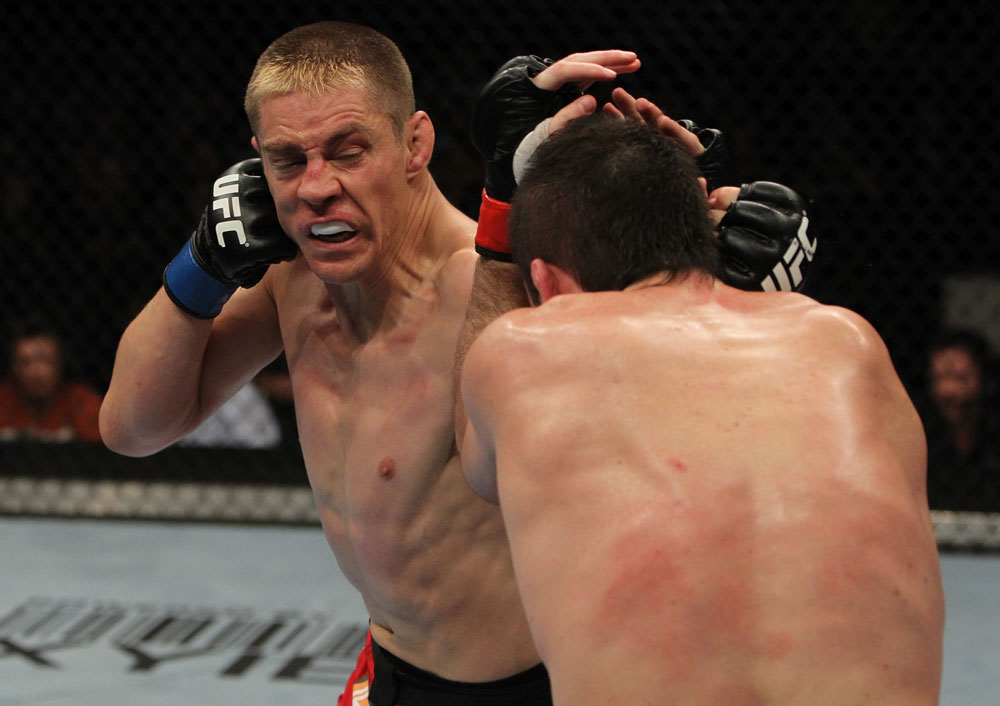 Back when Duane “Bang” Ludwig was collecting Muay Thai titles and then making a name for himself in mixed martial arts, most notably with a 73 second knockout of Jens Pulver in 2003, no one assumed that it would take years for him to finally get the attention he deserved.

He did everything you wanted to see from a striker – he had impeccable technique, knockout power in his fists and feet, and he always showed up ready to fight. It should have been the formula for stardom, but for some reason, the world never caught on.

So when Ludwig knocked out Jonathan Goulet in a 2006 UFC bout in Las Vegas and the timekeeper ruled the finish as 11 seconds and not the actual 6.06, few, including the fighter, paid much attention to it. UFC commentator Joe Rogan was one of those few who did.

“I was never too adamant about it, to be honest,” recalled Ludwig. “A couple weeks after the fight, Joe Rogan actually MySpaced me and said ‘I feel you should have got the fastest knockout.’ But I didn’t really care too much about it. I didn’t really understand marketing or anything at the time. But then Todd Duffee got his (seven second) knockout (of Tim Hague) and he was a big star all of a sudden, and I was thinking ‘well, wait a minute, that actually belongs to me,’ and it kinda irked me because it’s like being told the American flag colors are red, white, and purple when you know it’s red, white, and blue. What are you talking about?”

Then came one of those groundswells of support that may not be unique to the MMA community, but not too many do it better, and all of a sudden a movement began to give Ludwig his rightful spot at the top of the list for fastest knockout in UFC history. Ludwig, 33, was humbled by the reaction to his quest.

“It’s a good story for the kids because they’ll be able to say my dad or my grandpa is special because of that, and it’s a good thing to be known for because it separated me from every other human being on the planet, past, present, and possibly future, and that’s some cool stuff.”

The Nevada State Athletic Commission wouldn’t budge from its original ruling though, apparently leaving Ludwig out of luck. Well, at least until UFC President Dana White stepped in on Christmas Eve and Tweeted that according to the UFC, Ludwig’s knockout is the fastest in company history. He even provided video evidence that Ludwig’s finish of Goulet at 6.06 was faster than Duffee’s (7.56) and Chan Sung Jung’s recent KO of Mark Hominick (6.26).

“I’m not too boastful anyway, but it’s good to have it legitimate now,” said Ludwig. “There’s no discrepancy, which is cool. And the other thing that’s important to me is that I have more respect now, and with that I can help more people. I help quite a few people, and it’s definitely good to have a little bit more extra star power behind you to open doors a bit easier and so I can get more things done that I’d like to get done.”

That’s the “Bang” Ludwig that dominated headlines throughout 2011. Yet the real story isn’t what happened outside the Octagon, but what has been going on inside it, where a shaky return to the UFC in 2010 that resulted in an 0-2 record and a serious leg injury has turned into a return to welterweight and back-to-back wins over Nick Osipczak and Amir Sadollah. All of a sudden, Ludwig is a player again in the sport’s biggest organization.

“I should have moved to 170 before,” admitted Ludwig. “Making 155 has always been a struggle, and it is my fault because I chose the weight class. But now when I step on the mat to train, it’s to get better as an athlete and a mixed martial artist, and not just to burn calories. So the mental shift is a lot better for sure.”

With the exception of his six second blastout of Goulet, Ludwig hasn’t looked better in the UFC than he did last August, when he put on a striking clinic against Sadollah, who, to his credit, stood in there and tried to match the veteran kickboxer blow for blow. It didn’t end up well for the former Ultimate Fighter winner though.

“He attempted about seven takedowns, and they were unsuccessful with the exception of one,” said Ludwig of the bout. “So he definitely had it in his mind to take me down and was trying to use his striking as a setup, but the power of belief is definitely pretty strong, and he believed he could strike with me until I started cracking him. Then he realized that he needed to take me down, but it wasn’t happening. I can attribute that to moving up to 170. And now I’ve got a wrestling coach, Leister Bowling, and he’s definitely helped me a lot. This crew of guys here in Colorado is helping me, and we all help each other.”

Friday night, Ludwig is likely to get another willing standup combatant in fellow vet Josh Neer, a fighter you never have to look too hard to find in the center of the cage.

“He’s a super tough, durable veteran,” said Ludwig of Neer. “He’s been around a long time, he’s tough as nails, and he’s someone that always comes to fight and is always in good shape. It’s gonna be a tough night for sure and potentially Fight of the Night. I feel my wrestling is a bit better, I think he’s better off his back than I am, but overall at jiu-jitsu I think we’re about even, and I feel my striking is technically better than his, and I’m faster and I hit harder. So on paper, I give myself the edge, but you never know until the bell rings and we’ll see what happens. But I definitely felt good in training camp, things are coming together, it’s a good matchup, and hopefully things go well.”

Two words you never thought you would hear in a description of a Ludwig vs. Neer matchup – wrestling and jiu-jitsu. And while those options are there for both, it’s probably safe to say that this one is going to remain on the feet. If it does, that provides some interesting dilemmas for Neer because while “The Dentist” has fight-ending power and a granite chin, Ludwig has the technique and precise striking that can give anyone a long (or short) night. So the question is, can someone ever catch up to Ludwig’s years of experience in striking or make up for it with power and aggression?

“Of course, when we strike, we’re dealing with split seconds and fractions of an inch,” he said. “So anything’s possible, and that whole duck and chuck or lucky punch or you zig when you should have zagged thing, those things are true. When you’re striking with these little gloves, anything can happen. But technically, on paper, I feel I’m superior to most guys, but maybe I blink and the punch comes, I don’t see it, and something could happen. But the odds are definitely in my favor, and I’m always up to take that gamble and those chances. That’s fun to me and it keeps me awake and alive. The X Factor is, who’s gonna be more mentally ready when the bell rings, and hopefully that’s me.”

Sounds like 2012 is going to be an interesting one for the Denver native, and after the year he had in 2011, you have to wonder what he can do to top it. But he’s not interested in such pursuits.

“I’m happy no matter what goes on,” said Ludwig. “I don’t really want to top anything. I enjoy life.”