Dricus Du Plessis Is A Gladiator Here For Glory

UFC Middleweight Dricus Du Plessis Aims To Entertain The Fans And Take The Next Step To The Top In His UFC 282: Błachowicz vs Ankalaev Clash With Darren Till
By Gavin Porter, On Twitter @ItsGavinPorter • Dec. 9, 2022

It only took Dricus Du Plessis three fights to establish himself as one of the UFC’s rising middleweight stars.

The 28-year-old South African has wowed fight fans each time he stepped in the Octagon, starting by notching a clinical first-round knockout over Markus Perez. He followed that up with a bonus-worthy knockout of Trevin Giles, and out-performed Brad Tavares in a thrilling three-round war.

Those impressive performances helped Du Plessis smash his way into the middleweight rankings and secure a Top 10 bout with former world title challenger Darren Till at UFC 282: Błachowicz vs Ankalaev.

Du Plessis couldn’t be happier with his UFC journey so far and sees this fight with Till as the perfect opportunity to launch his name from rising star to true contender. 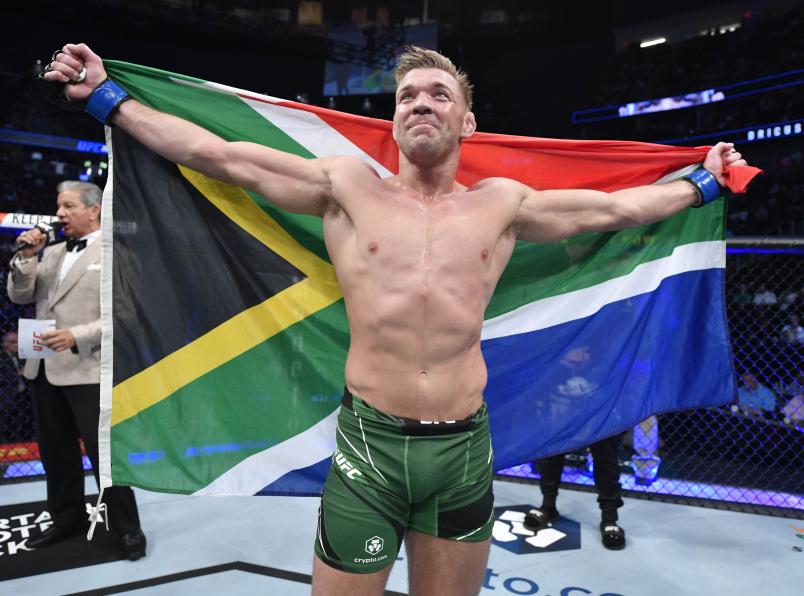 Dricus Du Plessis of South Africa reacts after his TKO victory over Trevin Giles in their middleweight fight during the UFC 264 event at T-Mobile Arena on July 10, 2021 in Las Vegas, Nevada. (Photo by Jeff Bottari/Zuffa LLC)

Du Plessis’ rise has happened under some of the brightest lights the UFC has had to offer, with his wins over Giles and Tavares taking place on the prelims of UFC 264 (Poirier vs McGregor 3) and UFC 276 (Adesanya vs Cannonier), respectively.

But thanks to his exciting style and winning ways, he’s worked his way onto the PPV main card – and rightfully so.

In 19 professional fights, Du Plessis has only gone the distance once and that happened to be in his most recent bout at UFC 276 against Tavares. That fight showcased Du Plessis’ skill set and proved that he absolutely belongs fighting the upper echelon of the middleweight division.

And even though Du Plessis is all about winning, he couldn’t help but take in the screaming fans at T-Mobile Arena and feel like that type of fight is what he’s made for.

“That was something that I’ve never experienced, and having that and hearing the crowd was wild. That fight was a blood bath, a true test, and an absolute war,” Du Plessis said. “Those are really the moments we do this for as fighters, well me, at least. What I live for is getting the crowd on their feet and knowing that I’m busy having a banger and having a great time doing it.”

Earning the reputation as not only one of the best middleweights on the planet but as an all-action fighter is something that is important to Du Plessis.

“I never ever ever had a non-entertaining fight. This will be my 20th professional fight and I have 17 performance bonuses in total,” Du Plessis said. “I know for a fact that I do not possess the ability to have a boring fight.”

Taking the opportunities that the UFC gives him and making the most of them is all Du Plessis can do. 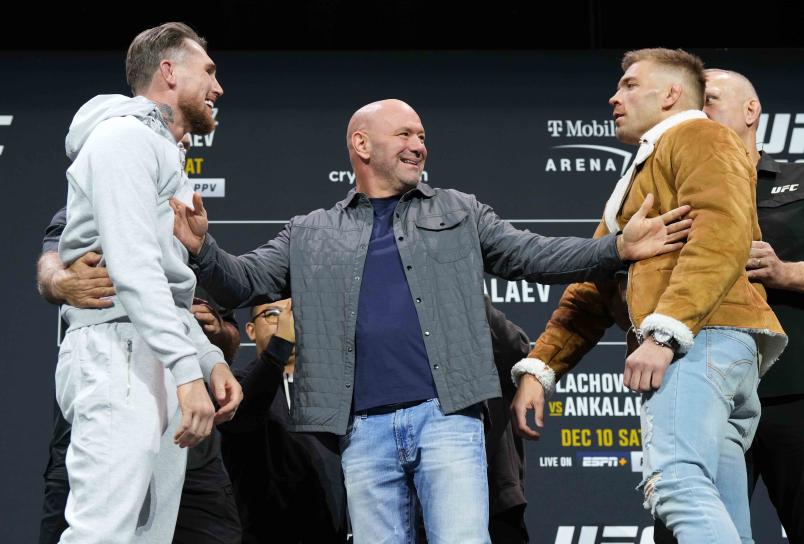 Opponents Darren Till of England and Dricus Du Plessis of South Africa face off during the UFC 282 press conference at MGM Grand Garden Arena on December 08, 2022 in Las Vegas, Nevada. (Photo by Cooper Neill/Zuffa LLC)

He believes that UFC President Dana White and the rest of the UFC see that Du Plessis has plenty to offer, and that if he continues to fight the way that he knows he can, he’ll be featured in main events and fighting for the middleweight title in no time.

“I think it speaks a million words what the company thinks of me, my fight style, and I’m honored. It’s what I set out to do. Be an entertaining fighter while winning at the same time,” Du Plessis said. “The opportunity is anybody’s for the taking and it’s great the UFC is seeing that I take the opportunity and they are giving me the reward that I feel that I deserve.

“Till is an object in my way to glory. That’s the only thing I see; an object that I need to get past to be the best.”

There is no doubt in Du Plessis’ mind that beating Till in emphatic fashion at UFC 282 is just another stepping stone on his way to achieving his lifelong goal.

“This win will cement me as a top 10 contender in the division and that’s when we get into the big fights and to the top,” Du Plessis said. “I will be the UFC champion.”