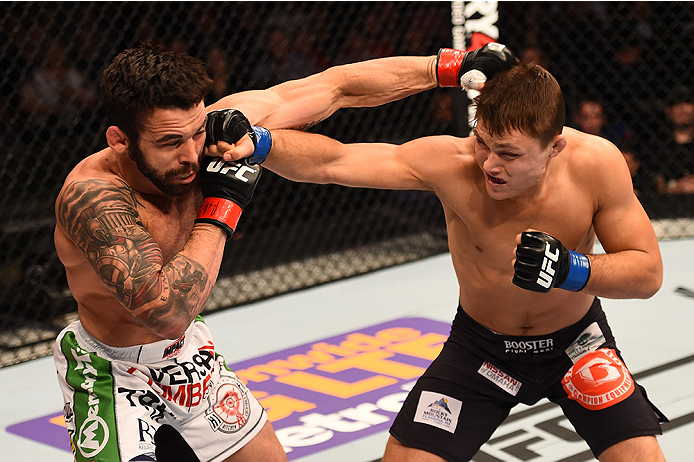 As a fighter, you want to have a role or an identifier – something that helps fans remember you; that one thing that immediately clicks for them when they hear your name.

The greats all have two or three things that jump to mind at the mention of their name, but for fighters on the come-up looking to establish themselves among the masses, finding that lone marker you can call your own can be the difference between surviving a rough a stretch and getting sent back to the regional circuit to figure things out.

“I made the joke that the UFC likes sending me into enemy territory,” the 26-year-old Nebraska native laughs. “I went to Germany to fight a German, I fought Jamie Varner in his hometown and now I’m fighting a Brazilian in Brazil.”

After losing a close decision to “Sergeant” Nick Hein in an entertaining back-and-forth bout when the UFC returned to Berlin last May, Dober was dispatched to Phoenix to take on former WEC lightweight champion Jamie Varner. It was his third shot at picking up his first win on the biggest stage in the sport and Dober made the most of his opportunity, capitalizing on a Varner mistake to sink to in a rear naked choke and collect a first-round submission finish. 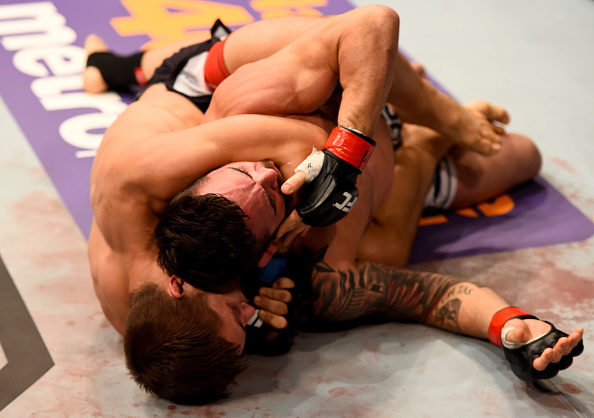 This weekend, Dober will once again take up his role as “The Enemy” when he ventures to Rio de Janeiro, Brazil to face 17-2-1 Brazilian Leandro “Buscape” Silva midway through the preliminary card portion of Saturday night’s fight card at the Ginasio do Maracanazinho. While international fighters have often struggled when making the trip to the South American MMA hotbed to face the country’s fighting sons and daughters, Dober is excited for the opportunity and is looking forward to the sharing the cage with the savvy veteran on his home soil.

“It’s the same nerves,” Dober, who auditioned for Season 15 of The Ultimate Fighter, losing his fight to get into the house to Daron Cruickshank, begins. “I can’t really say that I’m not nervous because I’m getting into a physical confrontation on national television, but it’s the same kind of nerves as always.
> See Drew Dober's favorite fighting techniques

“The whole thing is a chess match – implementing my strengths and nullifying his strengths,” he says of facing Silva on Saturday and fighting in general. “You’ve got a jiu-jitsu competitor that is really talented on the ground and in keeping the fight in close. I feel like I’m an exciting fighter and the fight gets better for me the longer it goes, so if I can keep the fight off the ground or away from his strong suits, push him into the later rounds, I think I can mentally break him and put my hands on him.

“I thrive in this environment,” he adds. “The pressure doesn’t get to me. I love it. The nerves turn into excitement and determination and I really can’t wait to put my hands on him. You have to be comfortable with the uncomfortable.”

Dober is certainly familiar with that feeling, both from his short time in the UFC and recent move to becoming a part of one of the best emerging teams in the sport.

Prior to his bout in Berlin, the Dober parted ways with his long-time team at home in Omaha, Nebraska, opting to do his training camp with Team Elevation in Denver, Colorado instead. Following the bout, he relocated to “The Mile High City” and became a permanent member of the team that includes recent title challenger Cat Zingano, surging welterweight Neil Magny and Brandon Thatch. 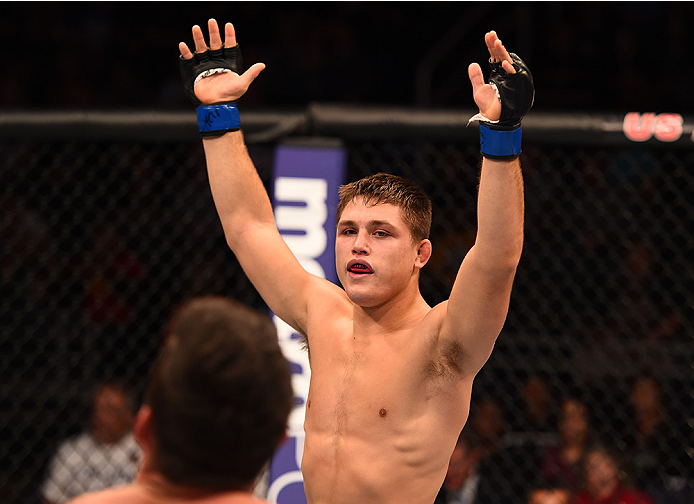 “It’s a hard decision to leave your friends and family and the people that got you into the UFC,” Dober, who made a name for himself facing stiff tests on the tough Midwest regional circuit prior to getting the call to the Octagon, says. “I never want to undermine that gym because they got me into the UFC and I’m the person I am today because of them. However, they made a decision to go a different direction and I think it was the easiest transition and the best transition to move to Denver and train with up-and-coming stars that are just as hungry as I am.

“The camaraderie is phenomenal; it’s the thing that caught me off guard,” he adds. “I fought two or three guys that are on the team, so I was the enemy at one time, but now I’m training with them – now they’re pushing me and offering me words of encouragement and really becoming my friends. When you’re surrounded by wolves, you perform like a wolf and that’s what I need.”

While he’s content to continue in his role as “The Enemy,” the energetic emerging lightweight wants to be known for something else as his career in the UFC cage continues to progress.

“It was a huge accomplishment beating Jamie Varner and getting the win, but that’s done and in the past. Now I’ve got ‘Buscape’ in front of me, so I’m focused on always improving as a fighter and knowing that going forward, every fight is the biggest fight of my life, regardless of who the opponent is.

“Being able to talk to Joe Rogan for the first time after a win was a dream come true,” Dober laughs. “I take the win – it was a very interesting fight to say the least – but all the hard work and preparation I put into it paid off and it was glorious. It’s tremendous and a small taste of what I want to continue doing – winning and putting on spectacular performances.

“I want to have a legacy of fantastic fights and make it so that when the fans know Drew Dober is fighting, they know that it’s going to be a barnburner.”
> Check out the full UFC Fight Night: Maia vs. LaFlare fight card