Drew Dober and the Best Year Ever 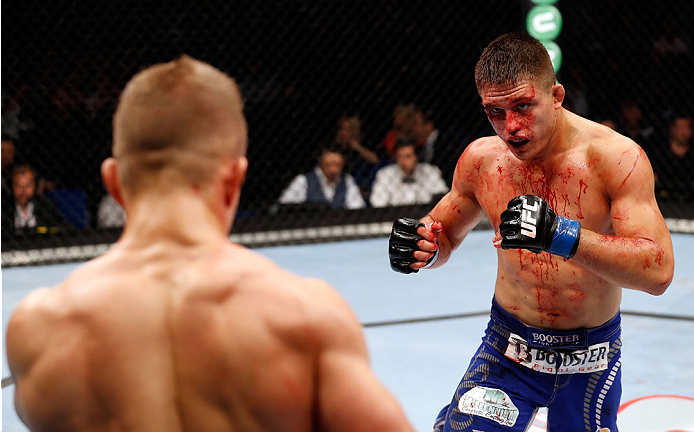 It’s been a tradition in mixed martial arts that when the fight is over, it’s over. The combatants shake hands and may even have a drink together after the smoke clears on their bout. Lightweights Drew Dober and Nick Hein followed this tradition after their May 2014 bout in Berlin, but then things went a step further.

“I fought Nick Hein in Berlin, and he was a really great guy,” Dober recalls. “He invited me to his post-fight party and I showed up and met his family, one of which is his sister.”

You can probably see where this is heading, but maybe not. Dober and Hein’s sister Gloria hit it off, and all of a sudden the Nebraska native had forgotten all about losing a decision earlier that night.

“We exchanged numbers and we were talking daily after that,” he said.

The couple soon had their version of a first date, which consisted of five days in New York. As the end of 2014 approached, Dober had a fight scheduled with Jamie Varner in December, and Gloria flew out to Denver to stay for the training camp.

“She saw me at my worst,” he laughs, “and then I went out and saw her in Germany and we lived together for three weeks there. So living with each other for that long, we jumped in the deep end.”

Dober met his lady’s parents, and after proving that gentlemen still exist in this world by asking Gloria’s father for his blessing, the young man who had gone 15 minutes in the Octagon with Nick Hein asked Hein’s sister for her hand in marriage. She accepted, and the week after his most recent fight against Leandro Silva in Brazil, the two were married.

Yeah, your courtship and wedding story probably won’t even come close to topping that one.

“As it was happening, we both looked at each other and said ‘yeah, this is something we’re going to be telling everyone,’” Dober laughs. But what does his former opponent and current brother-in-law have to say about all this?

“He made mention of me being his brother-in-law on the taxi ride back to the hotel from the post-fight party,” said Dober. “I guess he saw how his sister and I hit it off, and he was super excited. He’s been super supportive.”

So is it safe to say a rematch is out of the question?

“It would make things extremely awkward for my wife.”

Indeed. Plus, the new Mrs. Dober will have plenty to be stressed about over the next ten days, as her brother fights Lukasz Sajewski next week in Berlin, while her husband returns to the Octagon on Saturday to face Efrain Escudero in Mexico City.

For the 26-year-old Dober, it’s the fourth consecutive fight in which he will be the proverbial “bad guy,” having fought Hein in Germany, Silva in Brazil, and Varner in Arizona. At least the Varner fight – which he won via first-round submission was in the States, but for the bout against Escudero, he will be on the road outside of the U.S. once more.

“I might be the only lightweight with a passport,” he laughs. “I love tough competition, and I’m okay with going into enemy territory because I’m going to keep doing what I’ve been doing and win the crowd. I want to put on the most fantastic fights and be put in the worst case scenarios and turn them to my benefit. I won the crowd over in Germany and Brazil, and I want to do the same thing in Mexico.”

Given his fighting style and competitive, yet respectful, spirit, that’s pretty much a done deal. He also picked up even more fans in March for the way he reacted to his no contest against Silva, which produced one of the most bizarre endings in UFC history. On the mat with his opponent in the second round, Dober was suddenly the victim of a horrible call by referee Eduardo Herdy, who called the fight, saying the American submitted. Replays showed no such tap out, and while many would have erupted in anger, Dober was cool and classy.

“It’s like getting pulled over when you did nothing wrong,” he said. “At first there’s confusion. Then you’re like ‘there’s gotta be justice.’ And when everything simmered down, I talked to (UFC President) Dana (White) and they were going to make an attempt for justice, so you’ve got to take the cards that were given to you. Life throws you curveballs.”

Thankfully, the Brazilian MMA Commission overturned the loss to a no contest and Herdy admitted his mistake. It didn’t erase the incident or give Dober a chance to fight Silva and try to put a win on his record, but he moved on.

“You put time and effort into a 12-week training camp and you had the ability to win taken away,” he said. “Now my options were a no contest or a loss and that was out of my hands. But you have to say ‘how do I improve from this?’ I’m 26 years old and there’s always going to be a tomorrow, right? So how am I going to make tomorrow better?”

Well, he got married a few days later, and that was a good start. He also put in a hard training camp with Team Elevation in his new home of Denver, and now all that’s left is to put everything together on Saturday night against Escudero and pick up his second UFC win. He’s positive that will be the case.

“I wouldn’t be fighting if I didn’t think positively about where my career is going to go,” Dober said. “My first two losses in the UFC were extremely unfortunate, but it was the same thing with the first two losses in the beginning of my career. I started off 1-2, but I’ve had a career with a lot of chances to learn and grow. I wear my heart on my sleeve and I go out there and try to put on the best fight possible, and now I want to start displaying my talents and rising to the occasion and getting that W. Working with Team Elevation, my skill set is increasing tremendously, and accompanied with my heart, I feel my next fights are going to be even more fantastic.”

As fantastic as the story of his courtship and marriage to the sister of a former opponent? That’s going to be a tough one to top.