Dream or Nightmare? Leben Gets The Fight He's Wanted

“We’re both really not the most technical guys on the planet, but we go
in there, we get the job done and we keep the fans on the edge of their
seat." - Chris Leben 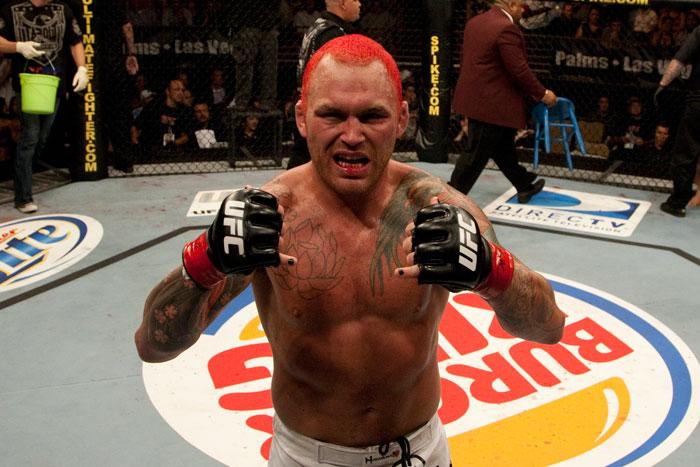 It’s one of the more difficult techniques to prepare for in the world of mixed martial arts, and one that may be impossible to replicate with one hundred percent accuracy. But Chris Leben tried his best in training to find sparring partners to match the combined burst of speed, punching, and berserker fury that has been the stylistic hallmark of his Saturday opponent, Wanderlei Silva.

“We’ve been doing our best,” he said. “Obviously you can’t train like Wanderlei’s gonna come at me, at full speed. You’re gonna have to find out how it goes when it goes. But I’ve been putting on a face helmet and having some faster guys tee off on me and throw those bursts like that and try to get the heck out of the way.”

Kinda puts the rest the theory that professional prizefighting is a glamorous profession. Does Leben ever wonder why he puts himself though this peculiar brand of torture?

Nah, can’t picture it. In fact, if you want the definition of a fighter, you look to guys like Leben. For all the hard days of training, days when you wish you were anywhere but the gym (especially when you live in Hawaii), when the bell rings, all is forgotten, and all that matters is getting yours before your opponent gets his.

If that sounds like a guy nicknamed “The Axe Murderer,” the same one Leben will be looking across the Octagon at this weekend in the UFC 132 co-main event, that’s not a coincidence. In fact, when asked in a recent interview if any fighters today remind him of himself, the first name out of Silva’s mouth was Chris Leben.

“It’s cool, I like it, and it’s kinda what I want,” said Leben. “We’re both really not the most technical guys on the planet, but we go in there, we get the job done and we keep the fans on the edge of their seat. It’s an honor that he said that.”

In any circumstance, hearing such a compliment from the former PRIDE champion would be something to get excited about, but for Leben, it goes deeper than that considering that one of the first fighters he latched on to as a fan when he began his own career was the Brazilian bomber.

“It was right after I started training,” said Leben when asked about his first exposure to Silva. “There was this Japanese toy store in Portland, and I’d go down there and he had recorded copies from Japan of PRIDE back before you could order it in the States, and that’s when I first saw him. I thought he was great, I loved his style.”

And when Leben went into the ring or cage, he went one step further than just being a fan; he wanted to pay homage to Silva by delivering the same kind of memorable, go for broke performances.

“I really like to have exciting fights, and I watched him and all of his fights were always exciting,” he said. “He goes out there and goes for it, and I appreciated that, and in some aspects I think I tried to emulate that in the early stages of my career.”

Some would say he never stopped. A pro since 2002 and a UFC mainstay since 2005, when he entered the Octagon after a stint on The Ultimate Fighter’s first season, Leben has hit a few bumps in the road during his 17 fight (11-6) UFC career, some self-inflicted, some issued by fighters like Anderson Silva, Michael Bisping, and Jason MacDonald, but through it all, “The Crippler” has always found a way to land on his feet.

Take 2010 for example. After back to back losses to Bisping and Jake Rosholt, Leben’s UFC tenure was on thin ice as he began the year. He went on to decision Jay Silva in January, and then stop previously unbeaten Aaron Simpson in June. That should have been impressive enough, but two weeks after the Simpson bout, he stepped in on short notice against Yoshihiro Akiyama at UFC 116 and delivered a Fight of the Night performance by submitting the Japanese star in the final round.

It was the comeback story of the year, and he expected to keep the momentum going in 2011, but on New Year’s Day he ran into a buzzsaw in the form of Brian Stann and stopped just 3:37 into the first round.

“You know how it goes,” he said. “Hindsight’s 20/20 and it’s water under the bridge. Stann fought a fantastic fight, absolutely.”

After the bout, it was learned that Leben entered the bout ill after an overindulgence of candy following the weigh-in. But in the interest of not taking away from Stann’s victory, Leben brushes off such talk with a simple “That was my bad,” before adding, “I think that the whole fight just got started off on the wrong foot for me. He (Stann) did a great job from start to finish.”

And oddly enough, everything worked out for the best for the 30-year old, as he was given the fight he had been asking for in Silva for July 2nd.

“My brother called me a couple days ago and he said ‘you know Chris, you’ve been talking about getting this fight for years and years,’” said Leben. “And I have. I think maybe I wasn’t ready then, but I’m ready now.”

That’s not to say that he’s ready to make any bold predictions on the outcome or start calling out Silva to stand in the middle of the Octagon and trade with him. That strategy is probably a given, and it’s giving Leben just the right dose of nerves before a bout the fight world can’t wait to see. So, the million dollar question is, will Leben be looking forward to soaking in the atmosphere and the crowd’s cheers on fight night like Silva is?

“Afterward, yeah,” he laughs. “As soon as the fight’s over and I won, yeah. But when I walk out I really don’t focus on the crowd or anything like that because I’ve still got a job to do. But I’m very excited and very honored to be able to fight Wanderlei in the show, right before the main event. It’s a pretty cool deal.”