NEW YORK - For a few moments on Saturday night in Madison Square Garden it was 2013 all over again, as two-time welterweight champion Georges St-Pierre returned from a nearly four-year layoff to submit Michael Bisping in the third round, take the UFC middleweight title and become only the fourth fighter in the promotion’s history to hold titles in two weight classes.

“It’s my dream come true,” said St-Pierre, 36, who took a hiatus from the sport after his November 2013 win over Johny Hendricks. Tonight’s victory, his 13th in a row, puts him alongside Conor McGregor, BJ Penn and Randy Couture as the UFC’s two-division champs and adds to his legend as one of the best to ever strap on the gloves.

“Georges was the better man tonight,” said the 38-year-old Bisping. “No excuses. He beat me.”

He didn’t get that win without a fight, though.

St-Pierre landed the first big shot of the fight, an overhand right about a minute in that reddened Bisping’s cheek. The Canadian followed up with some jabs and Bisping was seemingly having trouble getting into a striking rhythm. Soon, Bisping was bruised under both eyes and St-Pierre was controlling the pace as Bisping backpedaled. With a minute to go, St-Pierre looked for – and got – his first takedown, but Bisping rose fairly quickly. A Superman punch followed by a spinning back kick from St-Pierre was Bisping’s reward for getting up, and “Rush” looked like he never left.

After eating some more jabs and kicks early in round two, Bisping apparently had enough, and he began firing back with more bad intentions, trying to goad his opponent into a brawl. GSP responded with a takedown with under two minutes left, and when Bisping got up, he was able to land a hard overhand right, and he was back in his usual role of aggressor.

St-Pierre opened the third round with a takedown, but it was Bisping firing off blows from his back. St-Pierre, now cut and bleeding, eventually 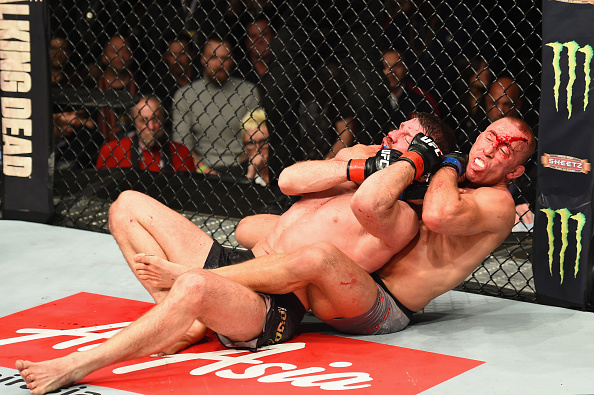 began throwing back, making for some interesting exchanges until the two rose just before the midway point of the frame. Now St-Pierre looked tired as Bisping wasn’t even breathing heavy. But out of nowhere, a St-Pierre left hook dropped Bisping, and the Montreal icon emptied his tank looking to finish. But when the resilient Bisping wouldn’t go away, GSP switched to his ground game, locking on a rear naked choke that ended the fight at 4:23 of round three.

St-Pierre improves to 26-2 with the win. Manchester, England’s Bisping falls to 31-8. He was making the second defense of the title he won from Luke Rockhold in June 2016.