The Downes Side: UFN Seoul Predictions 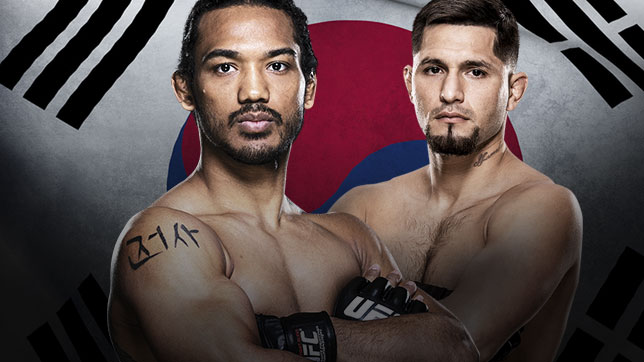 That’s right boys and girls, it’s time for another (American) Thanksgiving edition of the Downes Side, and The Nostradamus of MMA promises an action-packed night of fights this weekend. The main event features Benson Henderson and Jorge “Gamebred” Masvidal. In the co-main event of the evening, welterweights Dong Hyun Kim and Dominic Waters compete in the crowded 170-pound division. Put on your buckled hat, it’s fight time!

We open in the featherweight division with Dooho Choi and Sam Sicilia. The “Korean Superboy” Choi only needed 18 seconds to defeat Juan Puig in his UFC debut. Sam Sicilia has a bit more Octagon experience. The hard-hitting Washingtonian holds a 5-4 record inside the Octagon. Primarily a boxer, he has eight career knockouts.

Superboy is no slouch. He may not pack the same punch as Superman, but he’s pretty close. He has a lot of power, and knows how to use it with his kicks and punches. Sicilia may not have the same technical prowess, but he has something else -- the desire to hurt someone. Choi can bring the fight, but he doesn’t have the same offensive capabilities to hang with Sam. Sicilia takes it via TKO in the second.

Next we shift to welterweight for Yoshihiro Akiyama and Alberto Mina. “Sexyama” was undeterred by his four-fight losing streak when he beat Amir Sadollah by decision; unfortunately, that was in September of 2014. Mina has finished every one of his opponents, including 10 out of 12 in the first round.

Akiyama may have the rugged good looks that give sight to the blind, but he’s too old. I don’t care what Japanese product he’s selling, it better be closer to “Just For Men” than anything else. Mina may be 33, but he has way more tread on the tires than Akiyama. Mina will hurt Akiyama in the clinch, clip him with a knee and take home the second-round TKO.

We stay at welterweight for Dong Hyun Kim and Dominic Waters. Known for his grinding wrestling style, Kim has won five of his last six fights. The only loss on that streak came at the hands of Tyron Woodley. Waters steps in on short notice after losing his UFC debut to George Sullivan in a hard-fought decision. The Jackson/Winkeljohn product has finished opponents with knockouts and submissions.

It’d hard to bet against a Greg Jackson fighter, but this is too much too soon for Waters. He’s a capable fighter, but he doesn’t have enough experience to weather Kim’s attack. Waters may find early success, but the “Stun Gun’s” onslaught will eventually wear him down. Waters hasn’t shown the defensive wrestling capabilities to make him a sound pick. Dong Hyun Kim may face early difficulties, but he’ll ultimately pull off the unanimous decision win.

Time for the main event! It doesn’t matter what weight class it is, Benson Henderson is just looking for a fight. He’s found a “Gamebred” opponent in Jorge Masvidal. After a controversial split decision loss to Al Iaquinta, Masvidal finished Cezar Ferreira in the first round back in July. Henderson decides to throw his (relative lack of) weight back into the 170-pount decision.

Much like the movie Short Circuit 2, Benson Henderson is wildly underappreciated. Similar to Johnny 5, Henderson doesn’t show the most human emotion, but he’s an excellent fighter. I still question his move to 170 pounds, but he’ll win another fight in the division. Masvidal is extremely well rounded, but Henderson is more technically proficient in every skill set. Henderson uses his efficiency and smarts to take the unanimous decision.

That wraps up another Downes Side that everyone should give thanks for. Follow me on Twitter @dannyboydownes. Also, give your own thoughts, predictions, existential crises and Thanksgiving Day tips on the page here. Mine may be counter-intuitive, but be sure to eat breakfast. You have to build a little base so you don’t gas out too early when you get to dinner.