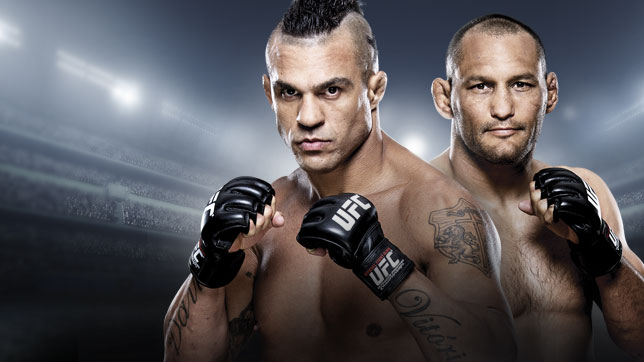 That’s right, boys and girls, it’s time for another middle aged version of the Downes Side!    It will be mostly like younger Downes Sides, just slower, about 20 pounds heavier and constantly complaining about those damn Millennials.

If you’re looking for a couple Generation Xers, the UFC Fight Night in Sao Paulo has you covered. Live from the Ginásio do Ibirapuera, the main event features Vitor Belfort and Dan Henderson. In the co-main event of the night, top ten light heavyweights Glover Teixeira and Patrick Cummins square off. So put off buying that red sports car, it’s fight time!

We begin the main card in the light heavyweight division with Fabio Maldonado and Corey Anderson. Everyone knows Maldonado for his Jason Voorhees fighting style. You know, the one where you take loads of punishment and slowly walk through it. Not the most technical, but he is 4-2 in his last six fights. Corey Anderson lost the first fight of his career to Gian Villante, but he bounced back with a win over Jan Blachowicz.

The move to 205 lbs has been good for Maldonado, but he still hasn’t diversified his offense. His first, second and third choices are to use his boxing. He does do a good job of mixing up body and head strikes, but it’s still a limited skill set. Anderson may be much more raw in his development, but he shows more upside. As long as he uses his movement and doesn’t stand right in front of Maldonado, “Beastin 25/8” walks away with the decision win.

Next we drop down to lightweight for Gilbert Burns and Rashid Magomedov. Both Burns and Magomedov are 3-0 inside the Octagon. Burns has won his last two via armbar over Alex Oliveira and Christos Giagos. Magomedov picked up the eighth TKO of his career when he finished Elias Silverio back in December.

Burns may have won his last fight, but it exposed a big weakness: striking defense. He would often stand still and let Oliveira tee off on him. Magomedov is much more fluid and uses his kicks to set up punches. Burns is a jiu-jitsu world champion, but he only succeeds on his takedowns 31.25% of the time. “Durinho” can pull out a submission at any time, but I doubt he’ll be able to bring Magomedov to the ground. Magomedov controls the stand-up exchanges and wears Burns out in the clinch to take the unanimous decision.

We stay at lightweight for Alex Oliveira and Piotr Hallmann. After the aforementioned loss to Gilbert Burns, Oliveira has won two straight over KJ Noons and Joe Merritt. He has shown improved grappling since his debut, but striking is still his preferred method of attack. Poland’s Hallmann may have dropped three of his last four, but he has beaten people like Yves Edwards and Francisco Trinaldo.

Plan on this being a straight kickboxing match. Both fighters have finished fights by submission, but that usually only happens after they batter their opponent on the feet. Neither has the best accuracy, but Oliveira is willing to throw more. His aggression will be the difference maker here. Hallmann has trouble fighting backwards and Oliveira proves that the UFC is big enough for two cowboys with a decision win.

We move to bantamweight for Thomas Almeida and Anthony Birchak. The undefeated Almeida has 15 career KOs, including his last two in the UFC over Yves Jabouin and Brad Pickett. At only 24 years old, he has a lot of experience and shows that poise when he fights. Anthony “El Toro” Birchak got caught by a heel hook only a minute into his UFC debut. He came back in his second fight against Joe Soto to finish him in 1:37.

Almeida is a patient fighter. That sounds odd considering he has 15 first round finishes, but it’s true. He doesn’t come out winging punches just for the sake of it. He reads opponents and then capitalizes. Birchak, on the other hand, is a very aggressive fighter. He gets right in his opponent’s face and starts going. Both philosophies have their pros and cons, but Almeida’s will be the superior one. Almeida has enough defensive prowess to avoid the big shot and Birchak hangs his chin out there too much for me to believe he can avoid a counter punch. Almeida by first-round TKO.

We return to light heavyweight for Glover Teixeira and Patrick Cummins. A former world title challenger, Teixeira ended his two-fight losing streak with a submission win over Ovince Saint Preux in August. Cummins lost to OSP when he met him last April, but he returned with a third-round TKO over Rafael Cavalcante.

Everyone wanted to write Glover Teixeira’s obituary after his losses to Jon Jones and Phil Davis. He received a little bit of life with the win over OSP, but a loss here could eliminate the 36-year-old from the title picture. Cummins needs a takedown to win this fight. I don’t think he can get one. Teixeira has above average wrestling defense, but his ability to control the boxing distance is the real tool. I don’t see how he enters grappling range without absorbing damage in the process. Teixieira may not have the same pop in his punches, but he’ll have enough to win by TKO in the second round.

Time for the main event! Vitor Belfort made his UFC debut in 1997. In 2015, he challenged for the middleweight title. The former went much better than the latter, but the 38-year-old is still relevant in the MMA landscape nearly two decades after making his pro debut. Dan Henderson fought in the Octagon for the first time back in May 1998 at UFC 17. He’s had a rough patch the last few years, but he only needed 28 seconds to drop Tim Boetsch back in June.

Henderson is an MMA legend, but he only has one weapon at his disposal - his right hand. It’s one hell of a weapon, but you still need more if you’re fighting Vitor Belfort, even if you think the Phenom is on the decline. Whether Vitor was 20 years old or 38, the knock against him is that all you have to do is get him out of the first round. Henderson may be able to do that, but I still don’t see him pulling it off. Belfort by second round TKO.

That wraps up another Downes Side that was anything but middle of the road. Follow me on Twitter @dannyboydownes. Also, don’t forget to leave your own predictions, thoughts, compliments and questions for Middle Age Man on the page here.