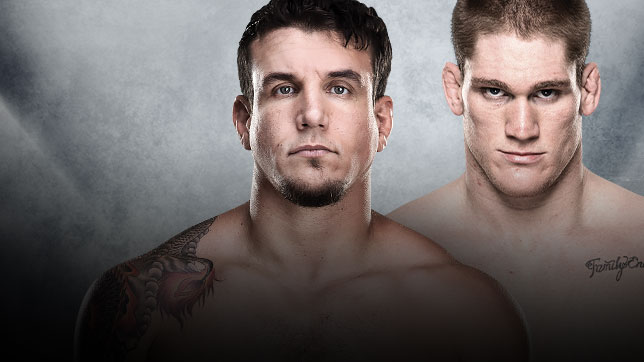 Dust off all your favorite Anchorman lines boys and girls, it’s time for a San Diego edition of the Downes Side! You may not find it in any leather bound books, but it’s kind of a big deal. Why? Because 70% of the time, I’m right every time.

So grab a wheel of cheese and three fingers of scotch as the UFC rolls into America’s Finest City for a hump day UlFC Fight Night. In the main event of the evening, former heavyweight champion Frank Mir tries to keep relevant as he takes on a newly committed Todd Duffee. In the co-main event, lightweights Josh Thomson and Tony Ferguson battle it out to differentiate themselves in a wide-open 155-pound division. Hey Aqualung, it’s fight time!

We begin the main card in the welterweight division with Alan Jouban and Matt Dwyer. Even though he’s a BJJ brown belt, Jouban likes to spend the majority of his time on 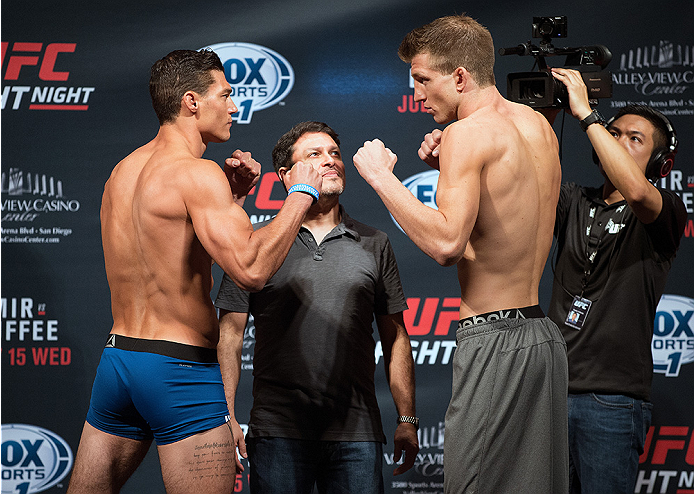 the feet. He’s never even attempted a takedown in the UFC. Matt Dwyer seems like the perfect opponent to stand and trade with him. The rangy Canadian striker even won
his last fight with a Superman punch TKO.

Jouban struggles when opponents bring the fight to him. You could see that in his loss to Warlley Alves. Dwyer isn’t a pressure fighter. He likes to stand at distance and pick opponents off. He’s giving up a lot in terms of power and speed, though. Jouban hurts Dwyer with leg kicks and finishes him off in the second.

Next we drop to lightweight for Kevin Lee and James Moontasri. Since dropping his UFC debut to Al Iaquinta, Lee aka 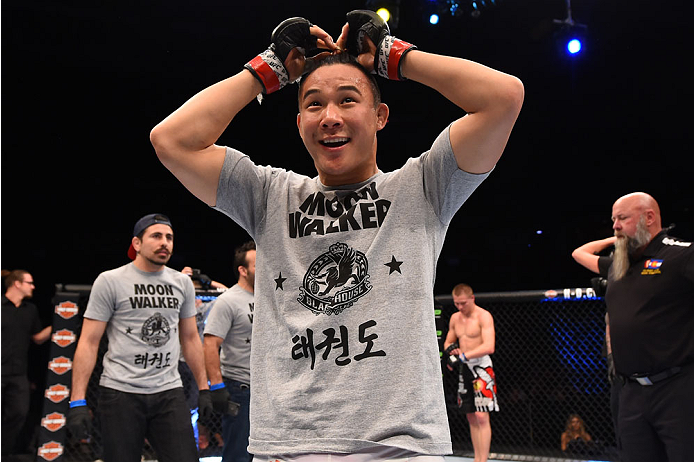 “The Motown Phenom” has won three in a row. Capable everywhere, he has four career submission wins. Moontasri has a Tae Kwon Do background, but he showed off his other skills when he submitted Cody Pfister via rear naked choke in February.

Lee is good at a lot of things, but not particularly great at any one of them. Whether it’s his striking accuracy (39.86%) or takedown accuracy (38.24%) Lee hits the mark about as well as a Filipino diving team. Moontasri has subpar striking defense, but Lee hasn’t shown that he has stopping power. Lee will be able to survive the fight, but it won’t be enough to pick up the win. Moontasri by unanimous decision.

We move to featherweight for a fight between two longtime 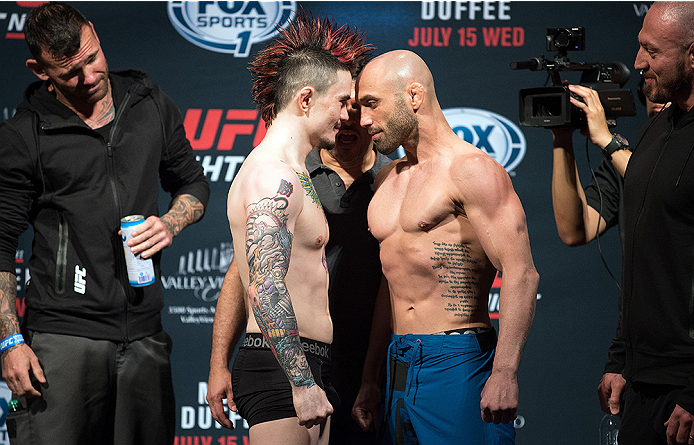 veterans. Once a WEC standout, Scott “Young Guns” Jorgensen has struggled as of late. He’s 2-6 since 2012 and has been finished in four of them. A veteran of season five of The Ultimate Fighter, Gamburyan bounced back from his loss to Nik Lentz with a second-round submission over Cody Gibson.

Past results do not necessarily indicate future success. If that were the case, I’d retire from this predictions hustle with all my money from scratch off lottery tickets. Despite his troubles, Gamburyan is actually a good matchup for Jorgensen. They’re both powerful grapplers with KO power in their hands. Having said that, you have to wonder about Jorgensen’s durability. It’s not that Manny is that much better than him, it’s just that his strikes have a greater effect. The Anvil drops the hammer and takes a first round TKO.

We shift to the women’s bantamweight division for Holly Holm and Marion Reneau. A former professional boxer and 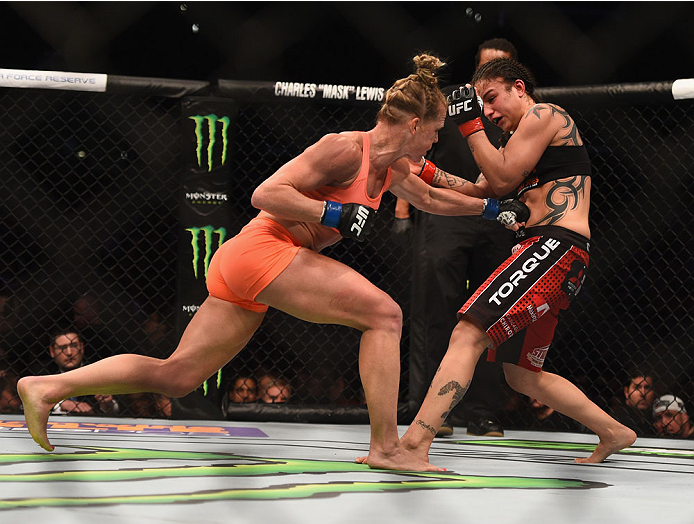 heavily touted as the next “Ronda Slayer,” Holly Holm did not have an easy go of it her first time in the Octagon. She picked up the win, but Raquel Pennington made her work for it. Marion Reneau is the next in line to spoil Holm’s undefeated record. The “Bruiser” has won her first two fights in the UFC over Alexis Dufresne and Jessica Andrade.

Everyone knows that Holm has great striking. She’s good with her hands and mixes in a lot of kicks to keep distance. She just seems to throw strikes without really showing why. Her accuracy in the Pennington fight was only 20.95%. Even in her fights outside the UFC, she suffered from similar problems. Unless she fixes those issues, someone will expose her. Remeau won’t be that person. Holm maintains distance and pot shots her way to the decision win.

We return to lightweight for the co-main event. Josh Thomson 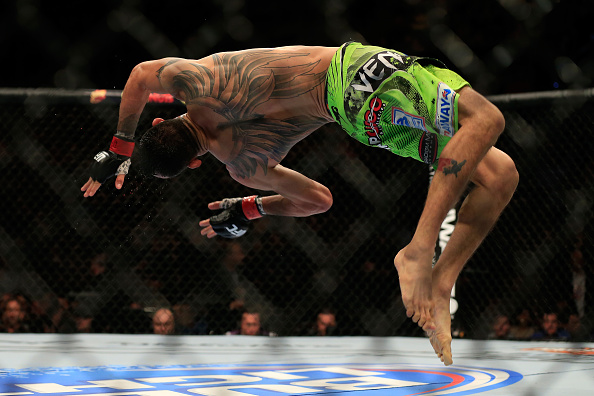 returns to the Octagon for the first time since his loss to Bobby Green about a year ago. He mulled retirement, but like most MMA retirements -- it didn’t last long. The 36-year-old has five career KOs, nine submissions and a gas tank that rivals anyone in the division. Winner of Season 13 of The Ultimate Fighter, Tony “El Cucuy” Ferguson is 8-1 in the Octagon. A win here over the former Strikeforce standout could really raise his profile.

Ferguson has all the makings of a player in the 155-pound division. He has a strong wrestling base and KO power. Not only that, he’s really turned the corner with blending his striking and grappling into one seamless attack. Simply put, he’s on the rise and Thomson is on the decline. Thomson may have a more dynamic striking attack, but Ferguson’s pressure and power will wear him out. El Cucuy by decision.

Time for the main event! Frank Mir is the most decorated heavyweight in UFC history, and he snapped his four-fight 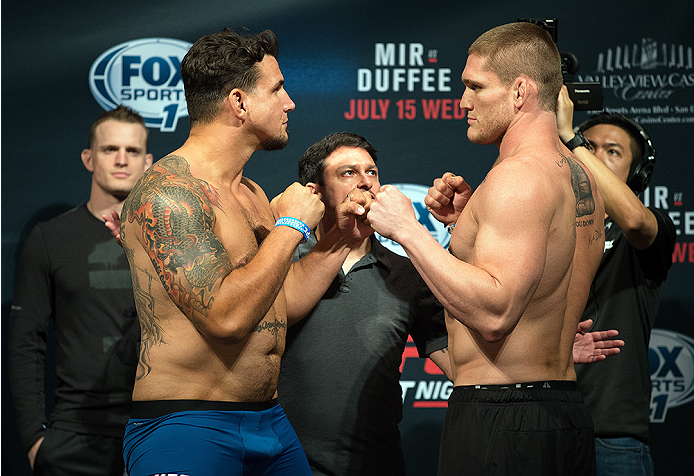 losing streak with a first-round KO over Bigfoot Silva in February. We all know about his jiu-jitsu, but he’s been fine tuning his boxing over the years. Sidelined by a rare disease known as Parsonage-Turner Syndrome, Duffee made his return to MMA in December. He wasted no time reverting back to his old form as he knocked out Anthony Hamilton in 33 seconds. All nine of his career wins have come by knockout (eight in the first round).

Just when you want to count Frank Mir out, he reinvents himself. He came out much smarter and crisper against Bigfoot. Duffee is a whole different animal. He’s faster and more dangerous in the first round. This is one of those fights where if Mir can avoid the initial rush, he should be okay. That’s a big if, though. Duffee isn’t the most technical, but you don’t have to be when you throw leather like him. Duffee by first-round TKO.

Great Odin’s Raven! That wraps up another expert edition of the Downes Side. Follow me on Twitter @dannyboydownes. Also, don’t forget to leave your own predictions, translations, affirmations or invitations to the pants party on the page here.