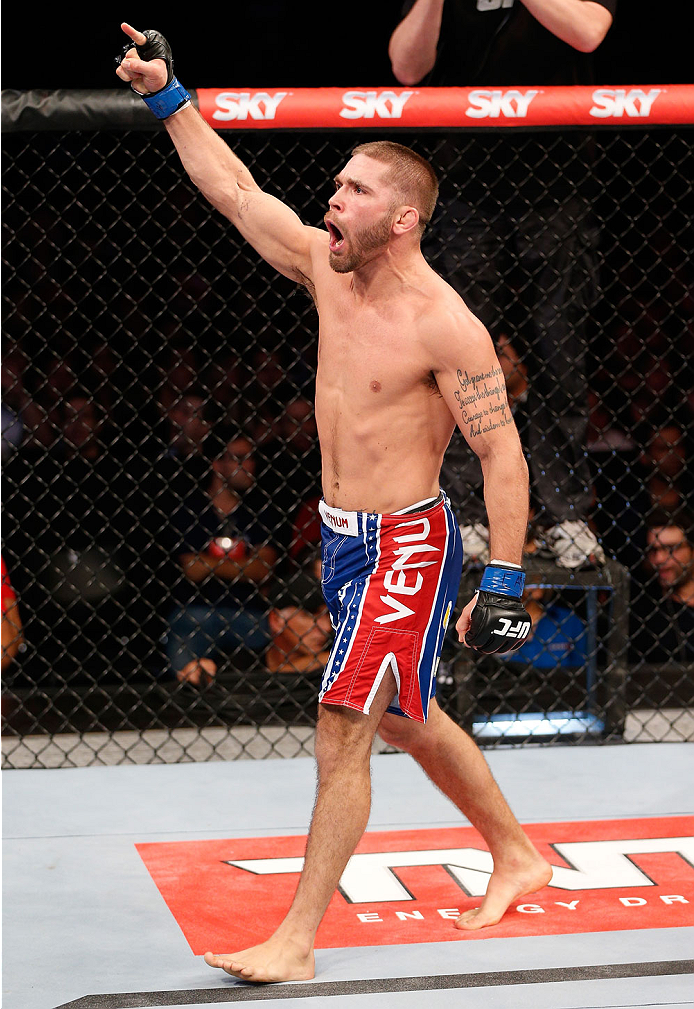 That’s right boys and girls, who needs baseball doubleheaders when you can get a double dose of the Downes Side? Get ready, because the Surgeon General has reported that it’s more fun than double dutch with double entendres while you drink a Belgian dubbel.

More intense than any physical challenge on Double Dare, the UFC rolls into the AT&T Center in San Antonio, Texas Saturday for UFC Fight Night. The main event of the night could decide the next featherweight title challenger as Cub Swanson faces off against Jeremy Stephens. In the co-main event, TUF 17 champion Kelvin Gastelum tries to extend his undefeated streak against Nico Musoke.

We open up at lightweight for Joe Ellenberger and James Moontasri. Brother to UFC welterweight Jake Ellenberger, Joe makes a long awaited UFC debut after battling paroxysmal noctrunal hemoglobinuria. James “Moon Walker” Moontasri steps in for an injured Bryan Barberena after a devastating KO win less than a month ago.

Moontasri may be a two-time Tae Kwon Do champion, but he’ll need more than that to win. Whether you’re thinking about King Arthur’s legendary sword or the giant margaritas you can get at the Las Vegas casino, “Excalibur” Ellenberger has waited too long to come out flat. Moontasri has a lot of power, but he leaves too many openings during striking exchanges. Joe may not have the same power in his hands as his brother, but he has enough to take advantage of Moontasri’s lax defense. Ellenberger wins by second round TKO.

We move to middleweight for Clint Hester and Antonio Braga Neto. A competitor on TUF 17, “Headbussa” Hester has used his boxing-heavy style to score seven KOs and a 3-0 record in the Octagon. A world jiu-jitsu champion, Antonio Braga Neto made quite the first impression in his UFC debut when he submitted Anthony Smith via kneebar in the first round. Yes, it may have happened over a year ago, but kneebars are like Twinkies - they never go bad.

This is a grappler vs. striker type of fight. Both fighters train in every aspect of MMA, but their strengths are evident. Can Hester avoid going to the ground? I consulted my magic 8 ball and it told me, “Outlook not so good.” Hester has KO power, but he loads up on punches and often falls off balance. This will give Neto the opportunity to get his hands on him and finish the takedown. Once there, he’ll advance position and cinch up the first round armbar.

We drop down to featherweight for Ricardo “The Bully” Lamas and Hacran Dias. After four straight impressive wins, Lamas earned a shot at champion Jose Aldo in February. He came on strong in the end, but he still lost the unanimous decision. A veteran fighter out of the Nova Uniao camp, Dias comes off a decision loss of his own against Nik Lentz.

Lamas may have to get back in line for a chance at the title, but he’s still a force in the division. Unlike Matt Brown, Lamas will live up to his nickname in this fight. Dias has the speed advantage, but it won’t be enough. Dias has the speed advantage, but it’s hard to showcase your speed when you’re spending the round pushed against the fence. Lamas strikes his way to the tie-up and bullies Dias to a unanimous decision.

We return to middleweight for Cezar Ferreira and Andrew Craig. Winner of the first season of TUF Brazil, Ferreira’s aggression worked against him last March when CB Dollaway only needed 39 seconds to knock him out. Athletic and powerful, “Mutante’s” striking may be inaccurate, but he only needs one punch to change the course of a fight. A jiu-jitsu brown belt with a penchant for striking, tough Texan Andrew “Highlight” Craig fell victim to Luke Barnatt’s rear naked choke his last time out.

This is a battle of two disparate styles. Ferreira likes to sprint right out of the gate and overwhelm opponents. Craig takes a more measured approach and prefers a volume striking game instead of single, hard shots. We may have all learned valuable life lessons from the tale of the tortoise and the hare, but they just ran a race. They didn’t fight each other. If that’s how the story went, you’d know that the hare would have taken out that tortoise. Ferreira wins the decision.

That leads us to the welterweight contest between Kelvin Gastelum and Nico Musoke. Winner of TUF 17, the 22-year-old Gastelum continued his undefeated run in March with a win over Rick Story. Competent in the stand-up department, his greatest attributes are his conditioning and takedown timing. After an impressive first-round upset submission over Alessio Sakara, Sweden’s Nico Musoke took a decision over Viscardi Andrade in February.

Musoke may have picked up the win against Andrade, but he defends takedowns at a below average rate. The stand-up exchanges will be even, but Gastelum will eventually finish the takedown and work. Musoke has shown some skill off his back, but Gastelum’s top game is too tight to get caught with an armbar like Sakara. Gastelum by decision.

Time for the main event! Five straight wins at featherweight have earned Cub Swanson the #4 ranking in the division and a potential title shot. He’s always had speed, but he’s undergone a striking renaissance the last few years. Four of his wins during this current streak have been by knockout. A fixture on the UFC since 2007, Jeremy Stephens’ move to down from lightweight has given the “Lil’ Heathen” a rebirth of his own.

This has Fight of the Night written all over it. Either has the potential to finish the fight at any moment, but Swanson’s chances are the greatest. Stephens does best against fighters that are willing to get into a firefight with him. If there’s one weakness in his stand-up, it’s in his footwork. Swanson’s speed will make it difficult for Stephens to close the distance and connect with combinations. Stephens has the superior wrestling, but Swanson sticks and moves his way to the decision win.

That wraps up another double trouble edition of the Downes Side. Follow me on Twitter @dannyboydownes. Also, don’t forget to leave your own predictions, quandaries, aspirations and anything else that involve the word double on the page here. I call dibs on Double Dragon (the game, not the cartoon)!