The Downes Side: UFN Nashville Predictions 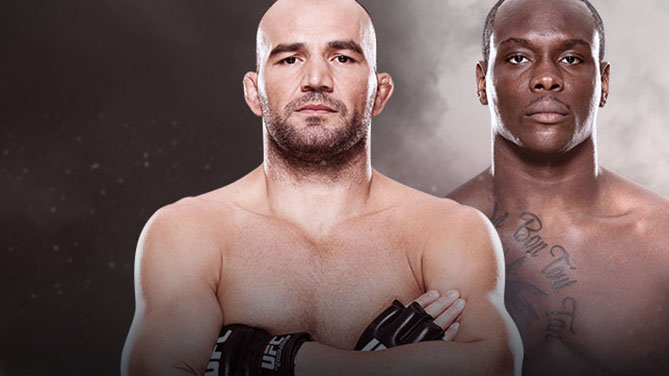 That’s right boys and girls, it’s time for a Nahville edition of the Downes Side! Grander than the Grand Ole Opry and tougher than old hickory, it’s the only MMA predictions article that matters.

So pull yourself out of whatever hermitage you’re living in and turn on FOX Sports 1 for Ultimate Fight Night. Live from the Bridgestone Arena, the main event features a light heavyweight contest between Glover Teixeira and Ovince Saint Preux. In the co-main event, lightweights Michael Johnson and Beneil Dariush square off. Who needs the Country Music Hall of Fame? It’s fight time!

We begin in the flyweight division with Ray Borg and Geane Herrera. After taking Dustin Ortiz to the limit fighting on short notice, Borg has rattled off two straight wins inside 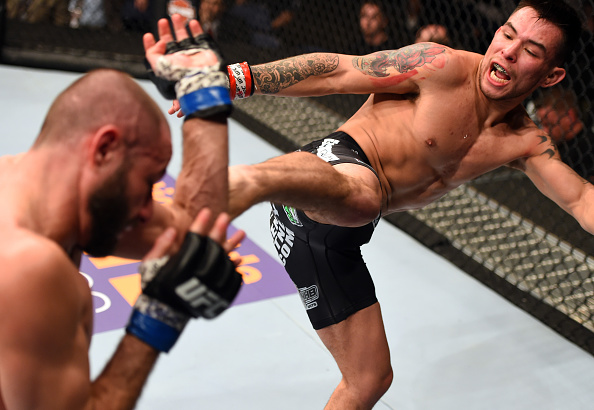 the Octagon. A powerful wrestler with six career submissions, watching the Tazmexican devil fight is almost as satisfying as Taza Mexican chocolate (retirement = no weight cutting). Geane “Pulga” Herrera will be searching for the sweet taste of victory himself. The undefeated fighter from Tampa makes his UFC debut and holds six career finishes (five by submission).

The amount of film on Herrera is limited, but he has looked impressive. He’s explosive (although not very active) with a lot of power for the division. While a competent grappler, his wrestling could use some work. He knows how to scramble, but he’ll only wind up scrambling into a submission. Borg via first round submission.

Next we move to the women’s bantamweight division for Sara McMann and Amanda Nunes. A silver medal-winning 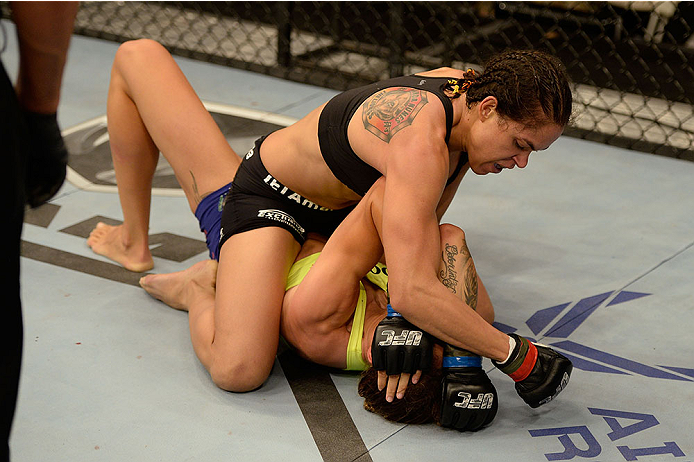 wrestler, McMann has gone 1-1 since her title shot at UFC 170. More than a one-dimensional wrestler, though, she does have the ability to bruise opponents with a solid right cross. A smooth, aggressive striker, Amanda Nunes finished Shayna Baszler in less than two minutes her last time out.

At first glance, this seems like McMann’s fight to lose. She has the best wrestling in the division and rarely lets opponents escape once she takes top position. Especially considering the way that Cat Zingano controlled Nunes in their fight, you might as well give McMann the win bonus. Fortunately for all of you, I take sometimes two (maybe even three!) glances at fights. McMann still lacks some striking defense, and has a more conservative style than Zingano. This will play into Nunes’s strengths as she pops her jab, controls the distance and takes the unanimous decision.

Now we jump up to heavyweight for Jared Rosholt and Timothy Johnson. A three-time All-American wrestler, Jared Rosholt smothers opponents and wears them out over the 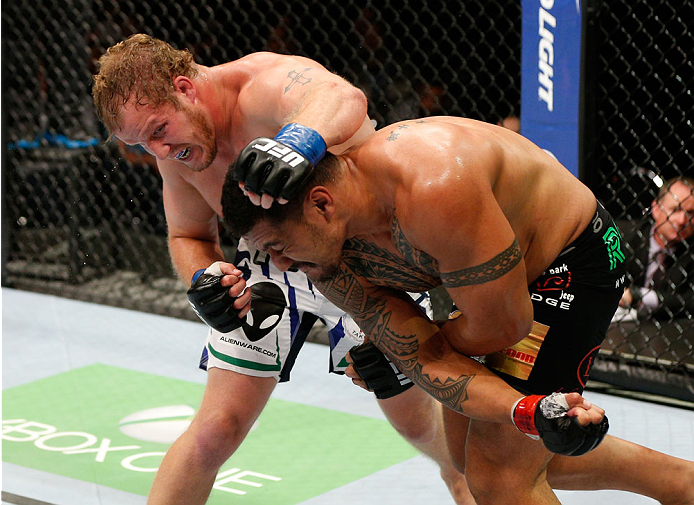 course of three rounds. Hailing from Fargo, North Dakota, fighting Timothy Johnson can be about as hazardous as hanging around a wood chipper. All nine of his career wins have come by submission or TKO. He’s coming off an impressive UFC debut where he knocked out Shamil Abdurakhimov in the first round.

Johnson may have a finely manicured mustache, but I can see through such adornments. He’s a capable striker, but he only uses it to force the clinch. From there he either fights on the inside, or drags it to the ground.  He’s good at what he does - strike enough to force the clinch and either beat his opponents down or drag them to the mat...and beat his opponents down. He’s pretty good at it. The only problem is that Rosholt is far better at all those things. Rosholt via unanimous decision.

We head to middleweight for Derek Brunson and Sam Alvey. Winner of his last two fights over Lorenz Larkin and Ed 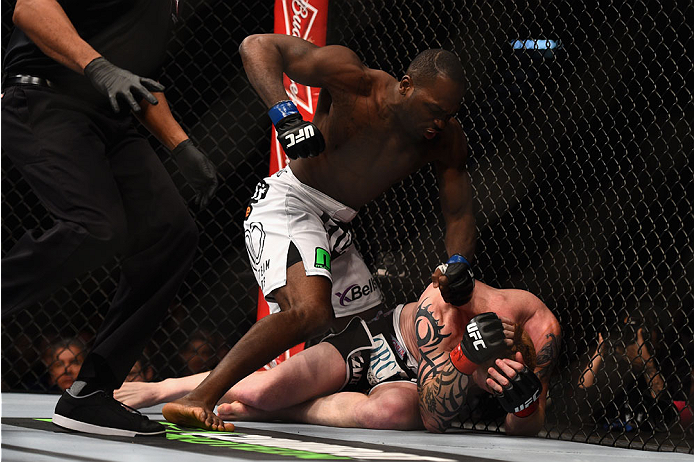 Herman, Derek Brunson could finally be ready to make a push in the 185-pound division. When he wasn’t spray tanning his way into our hearts, Sam Alvey was knocking out his last three opponents in the first round. It’s almost enough to forgive him for poor use of punctuation on his way to living up to expectations. Smile’N? I get that these millennials fail to understand the intricacies of a semicolon, ellipsis or an emdash, but have’nt we figured out how to use an apostrophe?

Alvey certainly has one punch KO power, but he’s slow. You could argue that you don’t need volume strikes when you’re that strong, but you need some type of output. I think he only threw three strikes in his fight against Cezar Ferreira. Brunson will be more mobile, more active and he’ll avoid the power shots. He’ll nickel and dime his way to a decision win.

That takes us to lightweight for the co-main event of the evening. After four straight wins in the stacked lightweight division, Michael “The Menace” Johnson has secured the 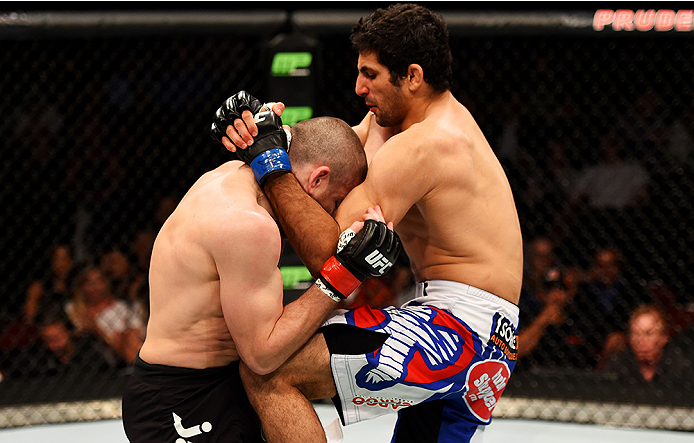 #5 spot in the rankings. An excellent kickboxer with strong takedown defense, he outstruck Edson Barboza his last time in the Octagon. Known for his slick jiu-jitsu, Dariush’s rapidly expanding/improving skill set has made him someone to watch.

Johnson has the clear advantage striking. Dariush has the clear advantage grappling. The question is, “Who can survive in their opponent’s world long enough to drag them into their comfort zone?” The answer is Beneil Dariush. Johnson is a better striker, but he’s inaccurate (35.78%). That allows Dariush to slip punches easier, cut off the cage and push Johnson against the fence. Once there, he’ll have an easier time securing the takedown and working the submission. Dariush via second round submission.

Time for the main event! A former title challenger, Glover Teixeira can gain some much needed momentum after two 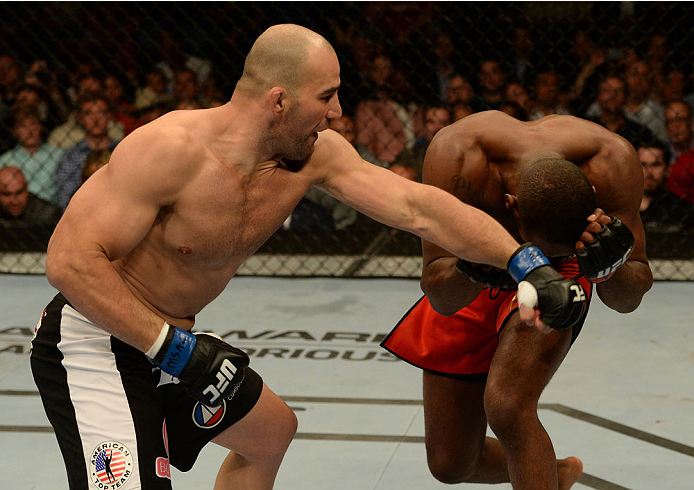 straight losses to Jon Jones and Phil Davis. A hard-hitting boxer, he holds 13 career knockouts. While Teixeira wants to earn a second UFC title shot, Ovince Saint Preux is working towards his first. Since losing to Ryan Bader about a year ago, OSP has first-round KO wins over Shogun Rua and Patrick Cummins.

There’s always the desire to ride a fighter on a streak. Teixeira is on the way down, OSP is on the way up. OSP is a relatively shiny, new toy in the light heavyweight picture, so it’s not surprise that people are putting a lot of faith in him. Thanks to reading a lot of those 3D books as a child, I’ve have gone beyond such superficial advances. Teixiera still has power in those hands and he sees the sailboat as he wins via first-round TKO.

That wraps up another Downes Side that even Andrew Jackson wouldn’t want to duel. Follow me on Twitter @dannyboydownes. Also, don’t forget to leave your own predictions, thoughts, queries, insecurities and favorite section of the Johnny Cash Museum on the page here. I personally can’t wait for the Alan Belcher wing.