The Downes Side: UFN London Predictions 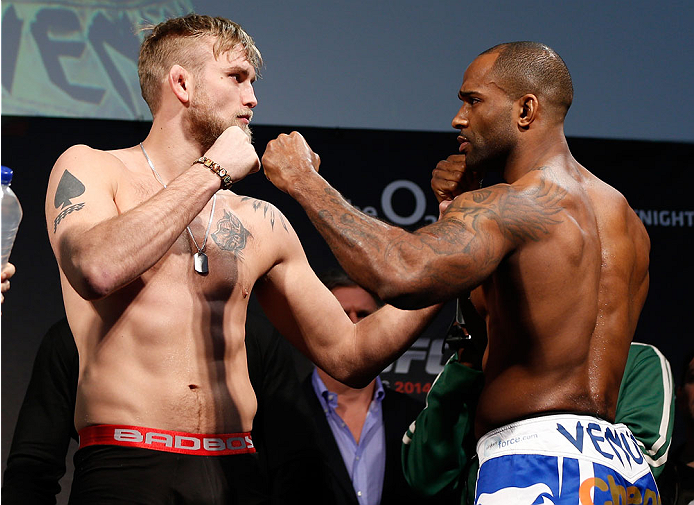 That’s right boys and girls, it’s time for another British edition of the Downes Side! Similar to the British Empire, the sun never sets upon the Nostradamus of MMA. Why? Because I spend most of my time indoors.

Regardless of your exposure to the sun’s rays, the Ultimate Fighting Championship returns to the O2 Arena in London, England for a fight card that would impress even the 1st Viscount Horatio Nelson. The main event of the evening features a light heavyweight battle as Alexander “The Mauler” Gustafsson takes on Jimi Manuwa in his own London backyard. Coming off an impressive, although unsuccessful, title shot against Jon Jones at UFC 165, Gustafsson could earn another shot at the belt with a win. A relative newcomer to the sport (he didn’t start training until 28) Jimi “Poster Boy” Manuwa has steamrolled everyone put in front of him. He’s finished all fourteen of his opponents, including ten of them in the first round. The co-main event of the night has implications for the lightweight top 10 rankings as Michael Johnson tries to continue his recent resurgence against Melvin Guillard.

The main card kicks off in the welterweight division with Gunnar Nelson and Omari Akhmedov. The most feared Icelander since the kids on the 1994 Junior Goodwill Games hockey team, he’s been sidelined for over a year due to a knee injury. An accomplished grappler who holds a Brazilian Jiu-Jitsu black belt and six career submissions, his karate-based striking style confuses opponents. A heavy hitter, Omari Akhmedov showed his knockout power with a first round TKO over Thiago Perpetuo in November.

Because of his karate background, many people compare Gunnar Nelson to Lyoto Machida. He’s good, but as Daniel Larusso taught us, not all karate practitioners are equal. Specifically, Nelson does not have the same elusiveness as “The Dragon,” and tends to absorb more damage. Akhmedov’s skill set may not be as diverse, but he only needs to land one solid punch to end the fight. Because of this danger, look for Nelson to bring this fight to the ground. Akhmedov often finds himself flat-footed, so Nelson shouldn’t have too hard of a time scoring the takedown. From there, he’ll advance position and work for submissions. Akhmedov puts up a fight, but the pressure and top control will eventually become too much. Nelson by second round rear naked choke.

We drop down to flyweight for Brad Pickett and Neil Seery. Making his debut at 125 lbs, Pickett looks for some momentum after dropping two of his last three. Nicknamed “One Punch,” Pickett has been in more memorable fights than the Gallagher brothers on an Oasis tour. His real talent, however, is on the ground, where he’s earned 10 career submission wins. Stepping in for an injured Ian McCall, Irishman Neil Seery tries to continue his improbable run to the top. After starting his career with a lackluster 7-8 record, he stepped up his game and has gone 6-1 over the last three years. While possessing some karate training, “2 Tap” doesn’t kick too often and focuses on a boxing heavy style.

Seery will surprise a lot of people with his striking. He can certainly go toe-to-toe with Pickett and absorb the best that “One Punch” has to offer. After letting the punches fly and spurring on the crowd, Pickett will wise up. Much like the Nelson/Akhmedov matchup, the difference maker here is in the grappling department. Seery will get too caught up in his offensive attack and leave the opening for the takedown. Once on the ground, the talent differential will be apparent. Pickett passes and locks up the first round submission.

Next we have a battle between former teammates Michael Johnson and Melvin Guillard. Replacing an injured Ross Pearson, Johnson has been asking for a top 10 opponent and could finally get his wish with a win here. What can we say about Melvin Guillard that hasn’t been said since 2005? One of the most dangerous strikers in all of MMA, the holes in his ground game have held him back from reaching the top of the lightweight ladder.

Johnson has come a long way since his run on The Ultimate Fighter season 12. He’s really turned the corner with his striking, especially with regards to his hand speed and footwork. He still doesn’t have the same firepower as Guillard, but the differences between the two have narrowed quite a bit. If Johnson can avoid the early blitz, he should pull this one out. His reach advantage will protect him and he can keep the distance and avoid prolonged engagements. Johnson has slowed down in other fights, but as long as he maintains his cardio he’ll be able to wear Guillard out and secure the third round TKO.

That brings us to the main event! Coming off one of those rare losses that actually increase your stock, Alexander Gustafsson can earn another light heavyweight title shot with a win. He may have lost a unanimous decision back in September, but he challenged Jon Jones more than anything else since the canvas at UFC 159. We’ve known about his boxing ability for a number of years, but the Jones fight showed how his wrestling has improved. Looking to ruin those chances for another title shot will be Jimi Manuwa. A vicious striker, all three of his Octagon wins have been by TKO.

In many ways Jimi Manuwa is still unproven. He’s crushed all his competition so far, but he has yet to go the distance and really be challenged. He won’t be able to steamroll Gustafsson like he has other opponents, so we have no way of knowing how Manuwa will react in the later rounds. Jon Jones is still the best light heavyweight in the world and you could argue that Gustafsson beat him back in September. Unfortunately, MMA math makes about as much sense as my recent tax return (seriously, how are liquor purchases not a business expense?). There’s a strong possibility that Gustafsson can bring this fight to the mat and grind out the decision victory, but I like to live dangerously. Gustafsson’s greatest weakness in the Jones fight was his inability to defend kicks. After Manuwa rips up his legs with low kicks, it will be much harder for Gustafsson to wrestle and put Manuwa on his back. There’s a strong possibility that Gustafsson can ride out the decision victory, but like I said, I like to live dangerously. As long as Manuwa does not fatigue, he’ll take the unanimous decision win.

That wraps up another Elizabethan edition of the Downes Side. Follow me on Twitter @dannyboydownes. Also, don’t forget to leave your own predictions, thoughts, questions, tax advice and most fashionable British admiral on the page here. Hard to pick against Sir Cloudesley Shovell.