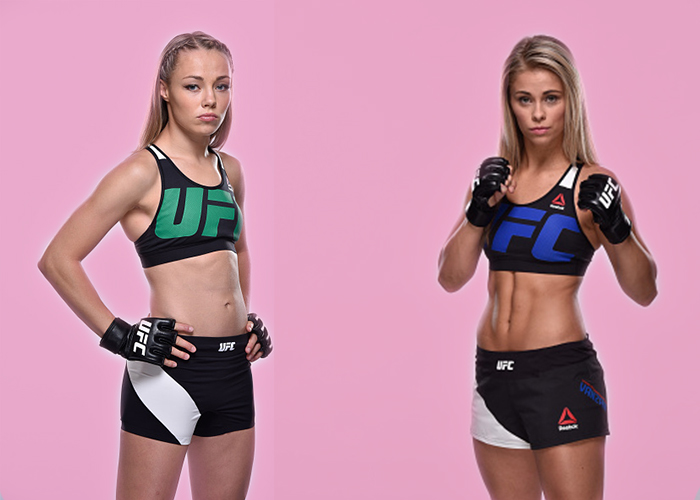 That’s right boys and girls, it’s time for the first of three straight Downes Sides! I can’t promise you it will be as good as Star Wars: A New Hope, but at least it won’t be like the Matrix franchise.

Usually on the first day of a three day festival, you try to take it easy. Fortunately for fight fans, the UFC has the same attitude I did for Lollapalooza 2006 -- you go hard. Live from The Chelsea inside The Cosmopolitan Hotel in Las Vegas, Nevada, strawweights Rose Namajunas and Paige VanZant compete for a top spot in the division. In the co-main event of the evening, Jim Miller and Michael Chiesa fight for a spot on the crowded 155-pound ladder. Bring plenty of water, it’s fight time!

We begin in the middleweight division with Elias Theodorou and Thiago Santos. A TUF Nations product, “The Spartan” delivers high quality offense and mediocre nicknames. A strong grappler with incredible cardio, he spends almost as much time on his training as he does his hair. Thiago Santos hopes to remodel the Canadian model’s face. Holding a 3-2 record inside the Octagon, he’s finished his last two opponents with first-round knockouts.

Santos is an excellent first-round competitor who fades as the fight progresses. Theodorou is the exact opposite. He doesn’t necessarily start strong, but he does better as it heads into the later rounds. The “Spartan” doesn’t really have the best technique, but his cardio and pressure make up the difference. Santos hasn’t had his takedown defense tested much and his tendency to telegraph his strikes makes him vulnerable. Normally I’d give Theodorou the benefit of the doubt, but Santos hurts him before the Spartan can grind him down. Theodorou starts slow and Santos comes out sprinting. He finds a home for his power shots and takes home the first-round TKO.

We drop to lightweight for Sage Northcutt and Cody Pfister. A 19-year-old with more abdominal definition than a physiology textbook, “Super” Sage burst on to the scene with a 57-second TKO over Francisco Trevino in his UFC debut back in October. With only one of his career fights making out of the first round, there’s a lot of hype (and potential Tiger Beat posters) surrounding him. Cody “The Fist” Pfister looks to break more teenage girls’ hearts than Taylor Lautner. After a submission loss to James Moontasri, he bounced back with a decision win over Yosdenis Cedeno at UFC 189.

Northcutt has speed, distance, footwork and crazy front flipping abilities. He also fights with the brash recklessness of a 19-year-old. People have already firmly planted themselves in the Northcutt fan or hater camp, but the young man is still a question mark, and this fight won’t answer any of those questions. Pfister has loose hands, flat feet and sticks his chin in the air. He’ll rush forward and try to overwhelm his opponent. He might get a couple of strikes in, but Northcutt’s technique will eventually win out. He’ll connect with a head kick, drop Pfister and follow up to secure the first-round TKO.

We remain at lightweight for Jim Miller and Michael Chiesa. A veteran of 20 UFC fights, Jim Miller foments fights almost as well as he ferments beer. Following back to back losses to Donald Cerrone and Beneil Dariush, he ended his losing streak with a split decision win over Danny Castillo. While he may not have as much experience as Miller, the “Maverick” has made quite an impression since appearing on season 15 of The Ultimate Fighter. A gritty fighter who constantly pressures opponents, he has eight career submission victories (including three inside the Octagon).

Scrappy is usually a term used for fighters that don’t have a lot of skill. In this case, though, both combatants are extremely well versed in MMA, but scrappy feels like the best descriptor. I suppose “workmanlike” also applies. Miller has steadily improved his boxing, but Chiesa is far more effective. He uses his reach, cuts angles, and knows how to attack openings far better. Miller may be a better pure wrestler, but Chiesa blends everything together better. It’ll be a tough, back and forth fight, but Chiesa scrambles and boxes his way to the unanimous decision.

Time for the main event! A finalist on TUF 20, “Thug” Rose Namajunas has a lot of expectations on her. An accomplished, dynamic striker, all her career wins have actually come via submission. If there’s any 115-pound fighter with more pressure on her than Rose, it’s Paige VanZant. The Team Alpha Male fighter may have a lot of expectations, but she’s lived up to them so far. Undefeated inside the Octagon, her aggression and relentless offense have treated her well.

VanZant remains a raw talent. While she does have a number of finishes, she doesn’t have a lot of finishing power. She hurts opponents with volume and accumulation of strikes. She also has adopted the “best defense is a good offense” philosophy since she defends strikes at a below average 39.86% rate. Against someone like Rose Namajunas, that just won’t do. Namajunas may not have exhibited KO power, but you don’t need it when your opponent charges forward into your fist. As long as Namajunas maintains distance and doesn’t set down too much, she should find a home for her punches and stun PVZ. VanZant will eventually get a takedown to stop the onslaught, but she’ll be worn out from the strikes and leave her arm exposed. Namajunas by second-round submission.

That wraps up the first third of the Downes Side trilogy. Follow me on Twitter @dannyboydownes. Also, don’t forget to leave your own predictions, thoughts, queries and triple threats on the page here. Mine comes from the Carnitas Snack Shack in San Diego.