The Downes Side - UFN Krakow 2015 Predictions 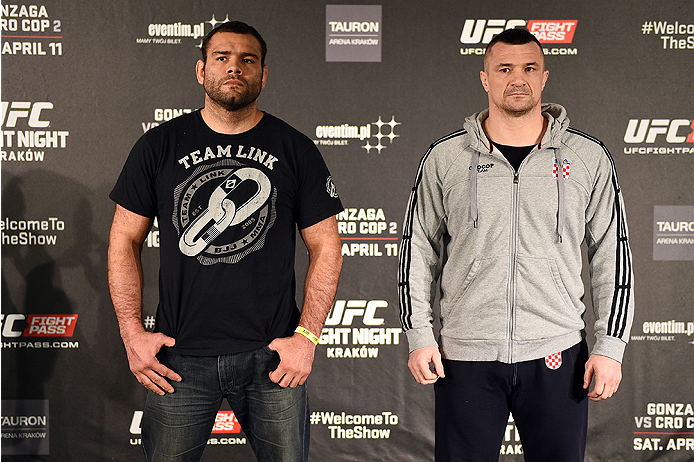 Polish up on your pronunciations boys and girls, it’s time for a Polish edition of the Downes Side!

Coming at you harder than saying Jedrzejczyk five times fast (or at all), the UFC rolls into Krakow, Poland for a Saturday card that marks the first in the European country. In the main event of the evening, MMA legend Mirko Cro Cop tries to exact revenge against the man who put him on the receiving end of one of the most brutal knockouts in UFC history - Gabriel Gonzaga. In the co-main event, light heavyweights Jimi Manuwa and Jan Blachowicz attempt to differentiate themselves in a crowded division. Grab some golonka, tłuczone ziemniaki, a side of grochówka and wash it down with some Żywiec, it’s fight time!

We open in the women’s strawweight division with Joanne Calderwood and Maryna Moroz. Calderwood is a Scottish striker who made it to the quarterfinals on season 20 of The Ultimate Fighter. She defeated Seohee Ham in her first official UFC fight back in December. Moroz is an athletic, Ukrainian fighter who has finished all her opponents (including four in the first round). Primarily a grappler, four of her career wins have come via armbar.

Moroz has a lot of talent, but she’s still unproven. She may have had some tough competition in her young career, but it pales in comparison to Calderwood. Moroz is rough around the edges, while Calderwood has found a groove with her Muay Thai striking attack. Moroz will try to close the distance, but “JoJo” will control the clinch and beat her up with knees and elbows. Moroz has never seen the judges’ scorecards...and she won’t see them here either. JoJo tells Moroz to get out, and wins by second round TKO.

We move to welterweight for Pawel Pawlak and Sheldon Westcott. Hailing from Lodz, Poland, Pawlak looks to nab his first UFC win after losing his debut to Peter Sobotta nearly a year ago. Well-rounded, he’s finished opponents by knockout (six times) and submission (three times). Runner-up on TUF Nations, Westcott is an extremely aggressive fighter that does not know the meaning of the phrase “play it safe.” To put it another way, this guy is about as conservative as Karl Marx.

It’s been nearly a year since both these fighters have competed. Having said that, there’s no real way to determine how much they’ve improved, if at all. Westcott has raw aggression, but there appears to be no reasoning behind his attack. It showed when he was on TUF Nations and really showed when he fought Elias Theodorou. Pawlak may not have one particular selling point, but slow and steady wins the race. Well, unless you get knocked out in the first round. But yeah, as long as he avoids the initial onslaught, the Pole takes the unanimous decision.

We jump to light heavyweight for Jimi Manuwa and Jan Blachowicz. Dubbed the “Poster Boy,” Manuwa was posterized in his last fight against Alexander Gustafsson. A powerful striker with devastating leg kicks, we’ll see how he bounces back from the first loss of his career. Another striker, Blachowicz showed off his kickboxing credentials as it took him less than two minutes to knock out Ilir Latifi in his UFC debut.

There’s a high probability that this will be a straight kickboxing fight. If that’s the case, you have to give the edge to Manuwa. You’ll hear people overuse the word “explosive” when talking about Manuwa, but that’s not why he’ll win. It’s not so much the speed in which he strikes, but the efficiency in which he attacks. Especially with his leg kicks, he cuts sharp angles and has no wasted movement. Blachowicz’s offense doesn’t have the same skill level. Manuwa batters him in the first and then puts it away in the second.

Time for the main event! The most anticipated rematch from 2007 until we all yell at Sam Raimi for what he did with Spiderman 3, Gabriel Gonzaga and Mirko Cro Cop are going to do it again, brother. 4-3 in his second stint in the UFC, Gonzaga has lost his last two fights to Stipe Miocic and Matt Mitrione. Cro Cop returns to the Octagon for the first time since his TKO loss to Roy Nelson at UFC 137.

There’s no doubt that the 40-year-old Cro Cop has faded. He’s remained active, though, and still has the ability to finish any heavyweight with his left leg. The big question here is if Gonzaga will try to recreate his incredible upset from eight years ago. If he stands toe-to-toe with Cro Cop, he’s going to lose. His striking defense has clear holes and his chin isn’t as durable as it once was. As long as Gonzaga goes for the win instead of the show, he should be able to neutralize Cro Cop with a tight clinch game and a well-timed takedown. Gonzaga by decision.

That wraps up another doskonała edycja of the Downes Side. Follow me on Twitter @dannyboydownes. Also, don’t forget to leave your own predictions, counters, encouragements or obraza on the page here.