The Downes Side: UFN Jaragua Predictions 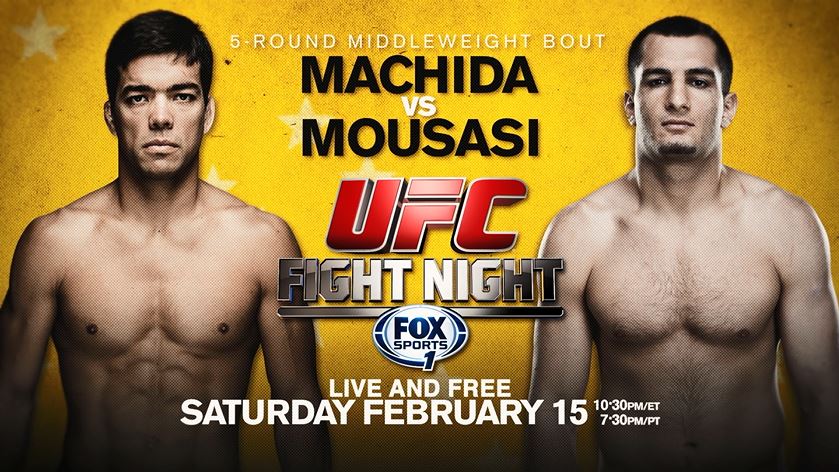 That’s right boys and girls, it’s time for another geographical edition of the Downes Side! This week we’re taking a journey to Jaragua do Sul, Brazil. Founded in 1876 by Brazilian Army colonel Emilio Carlos Jourdan, it’s annual average temperature is 21° degrees celsius (that’s about 70° F for our American friends).

While the weather outside may be mild, the heat will be turned up for Fight Night this weekend live from Arena Jaragua. The main event of the evening has title implications, as a newly refreshed Lyoto Machida tries to keep the momentum going after a brilliant middleweight debut in October. Looking to end that ascent will be former Strikeforce light heavyweight champion Gegard Mousasi, as he makes a return to the 185-pound division himself. The co-main event of the night pits two top 10 middleweights against one another as Ronaldo “Jacare” Souza and Francis “Limitless” Carmont jockey for position in the rankings.

We open up the main card in the featherweight division with Charles Oliveira and Andy Ogle. Oliveira comes in on a two fight losing streak after losses to Cub Swanson and Frankie Edgar. An explosive fighter, all four of his wins inside the Octagon have come via submission. A TUF 15 veteran, Ogle tries to bounce back from a unanimous decision loss to Cole Miller in October. A boxer with an iron will and chin, he excels at damaging opponents from top position with his ground and pound.

Ogle excels when he’s able to wear down opponents and bring them into the later rounds. Unfortunately, he won’t be able to hold off Oliveira’s attacks to reach that point. In his recent losses, Oliveira struggled with opponents’ speed. Ogle’s standup is capable, but he often moves flatfooted and doesn’t have the footwork of either Swanson or Edgar. Expect the Brazilian to come out quick and overwhelm Ogle from the beginning. Once the fight hits the mat, Oliveira advances position quickly and locks up the first round armbar submission.

We move up to welterweight for Viscardi Andrade and Nico Musoke. A semifinalist on the second season of TUF Brazil, Andrade made his official debut at UFC 163 against Bristol Marunde, where he only needed 1:36 to put his opponent away. Nico Musoke had an impressive debut of his own against Alessio Sakara. After taking the fight on short notice at a higher weight class, he finished the fight with a first round armbar.

While both fighters are well rounded, they each have the advantage in certain areas. If this were a kickboxing fight, Andrade would win. If it were a grappling match, Musoke would have the edge. The key to victory depends on who can blend their different techniques together and not become one dimensional. Keeping that in mind, I give the nod to Musoke. Andrade has the power advantage, but he has the tendency to swing wildly and lose his footing. As he goes for one of those big haymakers, Musoke will get enough of an opening to shoot in and secure top position. Andrade will be able to fight off the submission attempts, but not the judges’ scorecards. Musoke takes the unanimous decision.

We remain in the welterweight division for Erick Silva and Takenori Sato. A highly touted prospect who’s failed to put together a solid win streak, Erick Silva needs some redemption after his TKO loss at the hands of Dong Hyun Kim. With a combination of athleticism and knockout power, all his wins inside the Octagon have come in the first round. A decorated grappler, Sato is undefeated in his last ten fights. A capable boxer, he mostly uses his hands to set up his takedowns and work submissions.

Silva can be frustrating to watch. At times he looks like a world beater poised to take the welterweight division by storm. Others, he seems to lose discipline and fade as the fight progresses. Aside from a DQ loss against Carlo Prater, Silva’s losses have come against grinding grapplers. Sato would appear to have the abilities to give him problems, but he’s simply outmatched physically. Sato will try to bring the fight to the gorund, but he’ll absorb too much damage in the process. Silva fights off the takedowns, lands a big punch and takes home the first round TKO.

That brings us to the co-main event of the night. Better known by his nomme de guerre “Jacare,” Ronaldo Souza has wasted no time making an impact in the UFC with first round finishes over Chris Camozzi and Yushin Okami. A former Strikeforce middleweight champion, he’s also a world champion Brazilian Jiu-Jitsu practitioner. A Tristar Gym product, Francis Carmont brings an 11 fight win streak to the table (including six in the UFC). A strong grappler with a smothering top game, he used both of those to his advantage to defeat Costas Philippou at UFC 165 and jump into the top 10 rankings.

Jacare’s boxing has been steadily improving, but Carmont has a much more diverse striking skill set. Carmont was also able to control someone like Philippou, who had the highest takedown defense in the division when they met at UFC 165. Keeping all that in mind, I turn to film critic Roger Ebert to size up this fight. When discussing Limitless’ chances of winning, he wrote, “not terrifically good, but the premise is intriguing; 2.5 stars.” He may have been talking about the 2011 movie Limitless starring Bradley Cooper, but the sentiment still stands. Carmont has more techniques, but he’s also more tentative. Carmont will keep Jacare at a distance in the first round, but eventually the Brazilian will find his timing. Jacare will catch Carmont as he moves in for the takedown and then go for the kill. Souza by TKO.

Time for the main event! Some questioned if Lyoto Machida’s move to middleweight would reap benefits, but he proved the doubters wrong with a well-placed head kick against Mark Munoz in October. One of the most accurate strikers in UFC history, he also defends 80% of takedown attempts. Gegard Mousasi hopes for similar success as he makes his first appearance at middleweight since 2008. An accomplished striker in his own right, he’s finished opponents in 29 of his 34 career victories.

This fight will be like Nikola Tesla and Leonardo da Vinci going head to head in an episode of Shark Tank. It will be two masters showing off their craft for our amusement. Both men are not only excellent at exploiting holes in their opponents’ defense, they also avoid taking unnecessary damage. The one weakness I see in Mousasi’s game is how he uses his jab.  Normally extremely effective, he does lean his head out a bit too far sometimes. Usually it doesn’t hurt him, but against a southpaw like Machida, it means he’s leaning directly into the power hand. That counter left hand off the jab will help “The Dragon” dictate the pace and control the exchanges. It’s going to be a close fight, but Machida takes the unanimous decision win.

That wraps up another temperate edition of the Downes Side. Follow me on Twitter @dannyboydownes. Also, don’t forget to leave your own thoughts, predictions, derisions and favorite geographical terms on the page here. Personally, I just can’t choose between antipodes and Mercator projection.