The Downes Side: UFN Foxwoods Predictions 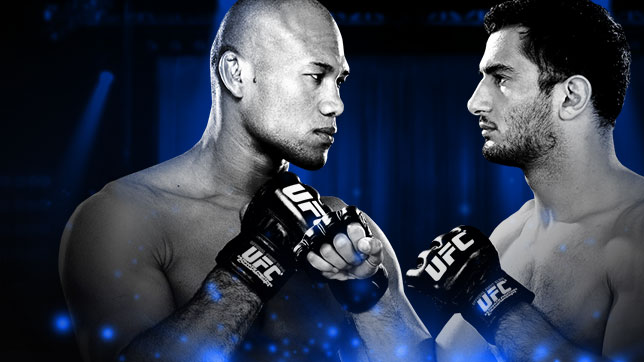 That’s right boys and girls, it’s time for another New England edition of the Downes Side! Fun fact: even old New York was once New Amsterdam. Why did they change it? I can’t say.

Nearly 5000 miles west of Istanbul (not Constantinople), the UFC rolls into The Grand Theater at Foxwoods Resort Casino at Foxwoods Resort Casino in Ledyard, Connecticut. Prepping for the big Lewis Black comedy show the next night, Ronaldo “Jacare” Souza and Gegard Mousasi battle for position in the middleweight division. In the co-main event, heavyweights Ben Rotherwell and Alistair Overeem won’t be joking around as they throw some serious leather. Prepare yourself for a East Coast delight on a moonlight night. It’s fight time!

The main card opens in the flyweight division for John Moraga and Justin Scoggins. A former number one contender, Moraga has dropped two of his last three. One of the hardest hitters in the division, his lack of striking accuracy has been his biggest weakness. At only 22 years old, “Tank” Scoggins has made a name or himself in a short amount of time. His high motor and aggression led him to wins over Richie Vaculik and Will Campuzano. He’s looking to bounce back from the first loss of his career after dropping a split decision to Dustin Ortiz in July.

Scoggins was breezing through opponents until Dustin Ortiz slowed down the hype train a few months ago. Scoggins may not be the world beater that we thought, but the 22-year-old still has a lot of upside. He may not possess the one punch KO power of Moraga, but he can overwhelm opponents with volume. Couple that with Moraga’s sub-par takedown defense, and this is the perfect fight for “Tank” to return to the win column. He’ll smother Moraga en route to a unanimous decision victory. Far more impressive, though, will be when Scoggins follows the lead of his namesake and becomes the youngest UFC fighter to ever write a book.

We move up to featherweight for Nik Lentz and Charles Oliveira. The second most dangerous “Carny” next to the guy that runs the Zipper, Nik Lentz has a 4-1 record in his last five fights, most recently beating Manny Gamburyan by decision in May. Another dangerous Brazilian Jiu-Jitsu practitioner with 11 submission wins to his credit, Charles Oliveira has only gone to decision twice his entire career.

Lentz has improved his game, but not enough to beat Oliveira. Everything that Lentz does well, “Do Bronx” is slightly better. He’s quicker, more aggressive and has a more dangerous grappling attack. The last time Lentz was submitted was August 2006. Just like Twix bars or Never Back Down movies, some things were made to come in pairs. Oliveira wins by rear naked choke in the second round.

That takes us to lightweight for Joe Lauzon and Michael Chiesa. Always entertaining, Lauzon has struggled to string together an extended winning streak ever since he’s joined the UFC. After dropping two in a row to Jim Miller and Michael Johnson, “J-Lau” answered with a decision win over Mac Danzig. Winner of TUF 15, Michael “Maverick” Chiesa tries to run his win streak to three after beating Colton Smith and Francisco Trinaldo.

Chiesa doesn’t blow you away with incredible striking or wrestling, but he’s a winner. He overwhelms opponents with relentless attacks and submits his opponents more often than not. That won’t be the case here, however. Lauzon struggles against opponents with the physical / athletic advantage, and Chiesa is not that fighter. Maverick only succeeds on 31.82% of his takedowns and that won’t be enough to ground J-Lau. The striking exchanges may be awkward, but when it ultimately hits the ground, Lauzon’s superior grappling game leads to the third-round submission.

We step up to heavyweight for Matt Mitrione and Derrick Lewis. A hard-hitting southpaw, Mitrione showed off that power with a first-round knockout over Shawn Jordan in March. While he can finish fights with his hands, his open guard leaves him prone to big counter attacks. Undefeated in the UFC, “The Black Beast” Lewis has taken both of his fights in the Octagon by first-round knockout.

Mitrione does have defensive lapses, but Lewis isn’t the most technical striker either. If this fight turns into a slugfest, Meathead has the edge. His footwork is far superior and his speed will help him avoid Lewis’s heavy punches. Lewis can end the fight at any moment, but he tends to plod along and does not throw much volume. Expect him to overextend himself, eat a left hand and Mitrione lays on the ground and pound to take the first-round TKO.

We stay at heavyweight for Alistair Overeem and Ben Rothwell. After back-to-back losses to Antonio Silva and Travis Browne, “The Reem” dominated Frank Mir with a decision win at UFC 169. While it may have earned him some criticism, Overeem’s more measured approach in that fight should be a cause for celebration. We should be a culture that rewards careful, methodic decision making. Hooray responsibility! That’s still a topical reference, right? After trading off wins and losses his entire UFC career, Big Ben Rothwell KOd Brandon Vera at UFC 164 a year ago and even showed off some cool dance moves.

Even if he channels his boogie fever, Rothwell will need to make it ugly to win. If he stands at distance, expect Overeem to get the better end of the striking exchanges. Even inside the clinch, I expect Overeem to win. Rothwell’s best chance is to wear the Dutchman down and look for the late finish, but this newer, smarter Reem avoids gassing out and takes the second-round TKO.

Time for the main event! Riding a six-fight win streak, “Jacare” Souza completely dominated Francis Carmont his last time out. Known for his jiu-jitsu, he’s been fine tuning his striking and has been finding a home for his thunderous right hand. A decorated kickboxer who’s finished 30 opponents, Gegard Mousasi rebounded from a close decision loss to Lyoto Machida with a first-round submission over Mark Munoz.

In the illustrious history of the greatest MMA predictions column on planet Earth (I’m referring to the Downes Side btw), this is one of the most difficult decisions I’ve ever had to make. Mousasi’s a brilliant kickboxer, but he also knows how to work off his back. Jacare has incredible jiu-jitsu, but also the wrestling to back it up. Add that to his 67% striking defense rate, and Souza has more than enough to survive if this turns into a stand-up battle.

The reason I get paid the big rubles, though, is to make tough decisions. And that’s just what I’ll do here. Mousasi may not have the best takedown defense at 55%, but that’s not the full picture. The first line of defense for any takedown is your footwork. Jacare will be the aggressor searching for his big cross and takedown. Mousasi deftly avoids the attacks, counters effectively and locks up the decision win.

That wraps up another incredible edition of the Downes Side. Follow me on Twitter @dannyboydownes. Also, don’t forget to leave your own predictions, perceptions, deductions and apprehensions on the page here. You may ask, “How did I get this work?” That’s nobody’s business but the Turks (and the editor’s).