The Downes Side: UFN Florida Predictions 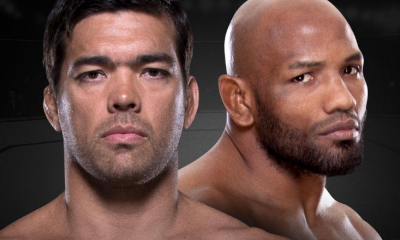 That’s right boys and girls, it’s time for a Hollywood (Florida) edition of the Downes Side! Don’t worry, I promise it’s much better than Dublin, Ohio, or Paris, Arkansas.

There’s nothing second-tier about this weekend’s slate of fights, and you won’t even need a visa to watch them! Live from the Seminole Hard Rock Hotel and Casino we have UFC Fight Night. In the main event of the evening, former light heavyweight champion Lyoto Machida hopes to maintain relevance in the 186-pound division against rising middleweight star Yoel Romero. In the co-main event of the evening, sluggers Santiago Ponzinibbio and Lorenz Larkin battle it out. Call your cousin from Birmingham, Iowa, it’s fight time!

We begin the main card in the featherweight division with Hacran Dias and Levan Makashvili. Following two straight losses, Dias bounced back with a decision win over Darren Elkins in December. A powerful, yet inaccurate, striker, he defends takedowns at an 80% rate. A grinder who attempts a lot of takedowns, Makashvili won his UFC debut over Mark Eddiva.

Oftentimes in life, we tend to oversimplify matters. We want to live in a black and white world where we can come to some sort of objective truth. The world, however, exists in nearly 50 shades of grey. I realize the difficulties of subscribing to some sort of moral relativistic view of existence, but that may be something that we have to face. In a world filled with confusion, at least we have this fight. This is a striker vs. grappler affair and Dias keeps his distance to take the decision. Now where is my copy of The False Subtlety of the Four Syllogistic Figures...

Next we take an existential jump to middleweight for Thiago Santos and Steve Bosse. A hard hitter with five first-round finishes, Santos tries to keep the momentum going after defeating Andy Enz in less than two minutes back at UFC 183. A former hockey enforcer who owns wins over Houston Alexander and Marvin Eastmann, “The Boss” Steve Bosse owns eight career KOs.

When you imagine a former hockey player turned MMA fighter, chances are it’s probably not too flattering. You probably think one of the Hanson brothers decided to grab a pair of 4oz gloves and give it a whirl. Bosse has much more skill than that, but he’s still overmatched. He hasn’t fought since May of 2013, and that’s just too long of a layoff to face someone like Santos. Bosse will come out aggressive, but Santos’s superiority will become apparent in a short amount of time. Santos via TKO in the first.

We remain at middleweight for Antonio Carlos Junior and Eddie Gordon. Winner of TUF Brazil, Junior aka “Cara de Sapato,” aka “Shoe Face” has a grappling game as impressive as his jawline. After beating Vitor Miranda, he dropped his last fight against Patrick Cummins in December. Eddie Gordon may have won season 19 of The Ultimate Fighter, but it’s been a hard road since. He’s lost two straight fights against Josh Samman and Chris Dempsey, and really needs a win here.

Neither one of these fighters possess a striking game that you would call spectacular. Both have KO power in their hands, but their accuracy rates are in the 30s. Much like Herbert Hoover’s presidential campaign in ’32, that’s a recipe for disaster. Shoe Face may have the superior jiu-jitsu, but he’ll have a hard time out-wrestling Gordon. These two will spend a lot of time in the clinch, and that’s a battle suited for the “Truck.” Gordon wrestles his way to a unanimous decision.

We drop to welterweight for Santiago Ponzinibbio and Lorenz Larkin. Argentina’s Ponzinibbio has two straight wins over Wendell Oliveira and Sean Strickland, and will try to run it to three in a row. The only thing more impressive than his 11 career knockouts is how many of his friends really like his tattoos. A former Strikeforce standout, Lorenz “The Monsoon” Larkin has had a rough go of it in the UFC. He holds a 2-4 record inside the Octagon, but has some momentum following a first-round TKO over John Howard in January.

There’s no doubt that Larkin is technically superior. In fact, Larkin has probably been the  superior technician in the majority of his UFC fights. Unfortunately for him, fights aren’t always won with technique. He often lacks aggression and winds up letting the fight come to him. That could be a problem against someone like Ponzinibbio, but he’ll pull one out here. Ponzinibbio is a front-runner. He can knock you out quickly, or fade away in the later rounds. Larkin is too smart to get caught in the first round. He wins this one by decision.

Time for the main event! We may be a few years removed from the Machida Era, but Lyoto Machida is still a relevant force. Making a quick turnaround since his April loss to Luke Rockhold, “The Dragon” seeks to get back into the win column. The #6 ranked fighter in the middleweight division, Yoel Romero could set himself up for title contention. A former Olympic silver medalist in freestyle wrestling, the “Soldier of God” possesses a lot of power in his hands. He’s coming off a controversial KO win over Tim Kennedy, but he can eliminate all doubters with a win.

We hear all about Romero’s wrestling credentials. Some enterprising young writers even mention it in their first paragraph about this fight. The fact of the matter, though, is that we’ve never really seen that transition to his MMA game. His takedown attempts can often be sloppy and he converts them at a 35.71% rate (insert second Herbert Hoover joke). People talk about Machida getting old, but he’s actually younger than Romero. Romero wins this fight by overwhelming Machida with power. The Dragon may have lost a step, but I still trust his counter striking over Romero’s offense. Machida by third round KO.

That wraps up another often imitated, yet rarely duplicated version of the Downes Side. Follow me on Twitter @dannyboydownes. Also, don’t forget to leave your own predictions, queries and favorite currywurst recipes on the page here. It’s all the rage in Berlin, Connecticut.