The Downes Side: UFN Chicago Predictions 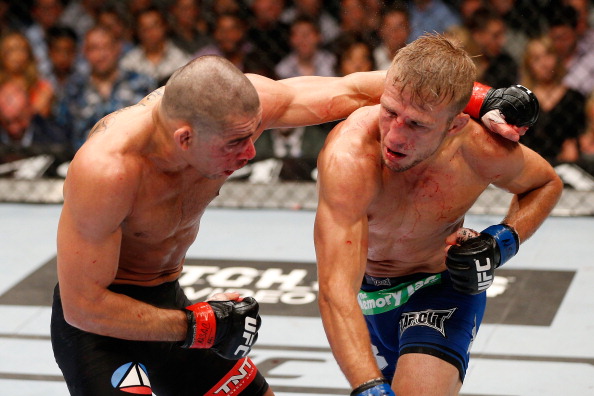 That’s right boys and girls, it’s time for another Chicago edition of the Downes Side! The Nostradamus of MMA’s insights are deeper than the crust on a Lou Malnati’s pizza, and they’re here to help those of you who are greener than the Chicago River.

With the fire of Mike Ditka when he gets a well-done steak, the UFC returns to the United Center for the UFC on FOX. Barring any last minute changes or alien abductions, we’ll finally get to see the rematch between TJ Dillashaw and Renan Barao for the bantamweight title. In the co-main event of the night, top 5 women’s bantamweight fighters Miesha Tate and Jessica Eye try to make their case for title shots. So grab a hot dog and relax, it’s fight time!

We start in the lightweight division with Joe Lauzon and Takanori Gomi. The most dangerous nerd on the planet, Lauzon is never in a boring fight. He has excellent jiu-jitsu, 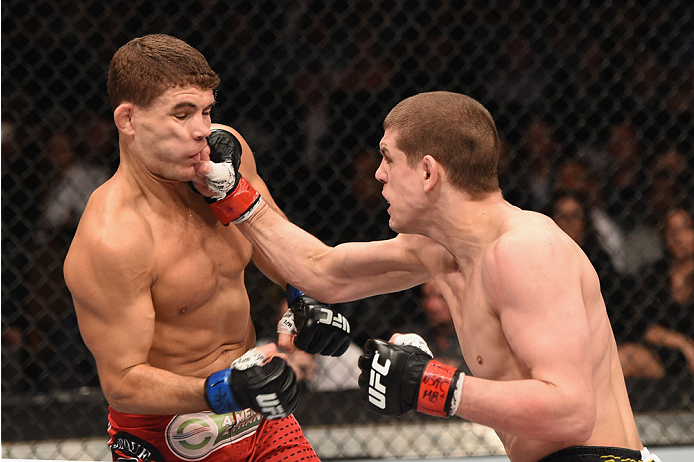 but he’s always willing to stand in the pocket and trade shots. A legend in the Japanese MMA scene, Takanori Gomi has had mixed success since coming to the UFC. He’s fighting for the first time since September, when he suffered the first TKO loss of his career to Myles Jury.

Both of these fighters are always looking for the finish. They both also leave openings for opponents to exploit. Gomi was known for his KO power, but that seems to have diminished over the last couple years. Without that same ability to make Lauzon respect his striking, I think that Lauzon overwhelms him. Lauzon will still eat some punches on the way in, but he’ll force the clinch, lands some knees and eventually secure the takedown. Lauzon via submission in round two.

We remain at lightweight for Edson Barboza and Paul Felder. A dangerous striker with brutal leg kicks, Barboza just

hasn’t been able to string together wins in his UFC tenure. He’s coming off a decision loss to Michael Johnson in February. Stepping into the Octagon for the third time, Paul Felder takes a big jump in competition. Another striker, he likes to counter strike, but he’s shown off some dynamic techniques (e.g. his spinning backfist KO of Danny Castillo).

This is going to be a very interesting matchup. Both fighters want to keep the fight on the feet, but they have very different styles. Barboza likes to come forward and use his speed and athleticism to beat down opponents. He gets knocked for having a bad chin, but those accusations are based off isolated incidents. Felder may not have the same explosiveness, but he does pick his shots better and times his counters well. Barboza will come out strong, but he only wins if he can get Felder to lose his composure. I don’t see that happening. The “Irish Dragon” works his way to a decision win.

That brings us to the women’s bantamweight division for Miesha Tate and Jessica Eye. Still waiting for a third shot at Ronda Rousey, Tate has won three in a row since losing 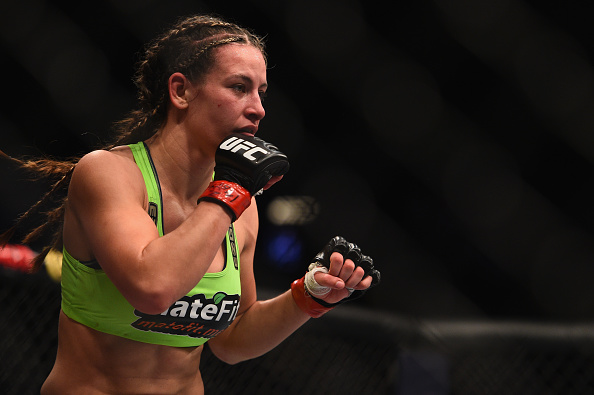 to Rousey at UFC 168. She’s a grinding wrestler with incredible durability, and she needs that chin with a striking defense of less than 50%. Primarily a kickboxer, “Evil” Eye is 1-1, 1 NC inside the Octagon. Her last time out, she nearly punched off Leslie Smith’s ear to earn the TKO.

This is a wrestler vs. striker match. Tate can sometimes get suckered into stand-up fights, but eventually she takes enough punches to look for the takedown. Can Eye finish her before that happens? Probably not. Eye’s strikes are accumulative. She doesn’t have tremendous KO power and beats opponents by repeatedly beating them down (or taking their ear off). Tate knows how to take a punch and will use that ability to get on the inside. Eye may have been working on her wrestling, but it won’t be enough to stop the takedowns. Tate stays in top control for the majority of this fight and takes the decision.

Time for the main event! After shocking the world over a year ago, TJ Dillashaw and Renan Barao meet for one of the most anticipated rematches in a long time. A Division I wrestler, we’ve seen how Dillashaw’s striking has evolved with 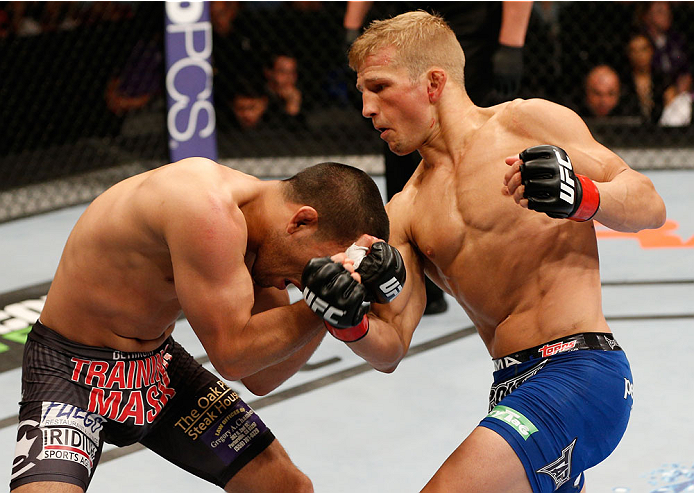 Duane Ludwig. He utilizes a lot of footwork and constantly attacks opponents from different angles. Some have been known to call Renan Barao a “monster.” Most people think of his striking, but Barao is another well-rounded fighter. He has 15 career submission wins and defends takedowns at an amazing 96.97% rate.

Rematches are always tricky. We expect them to usually play out like the first meeting, but both fighters have had time to develop and work out game plans. In their first fight, Barao had absolutely no answer for Dillashaw. He couldn’t find any rhythm and struggled to keep up. Barao does best when opponents stand in front of him, and that’s not Dillashaw’s style. Barao does have the power advantage, though, and could change the course of the fight with a single strike in a way that Dillashaw can’t. The one worry I have with Dillashaw is that he resets his stance a lot during a fight. Normally that’s not a problem, but he doesn’t usually do it from a safe distance. A momentary lapse could give Barao the opening he needs to pounce. Having said that, I think Dillashaw’s movement makes him a bad matchup for Barao. The champ retains his title via decision.

That wraps up another Downes Side that even a former Illinois governor couldn’t screw up. Follow me on Twitter @dannyboydownes. Also, don’t forget to their your own predictions, petitions, postulations, prognostications and things you miss about Chicago on the page here. Have you ever tried to get an Italian Beef sandwich in California? Terrible.