The Downes Side: UFN Berlin Predictions 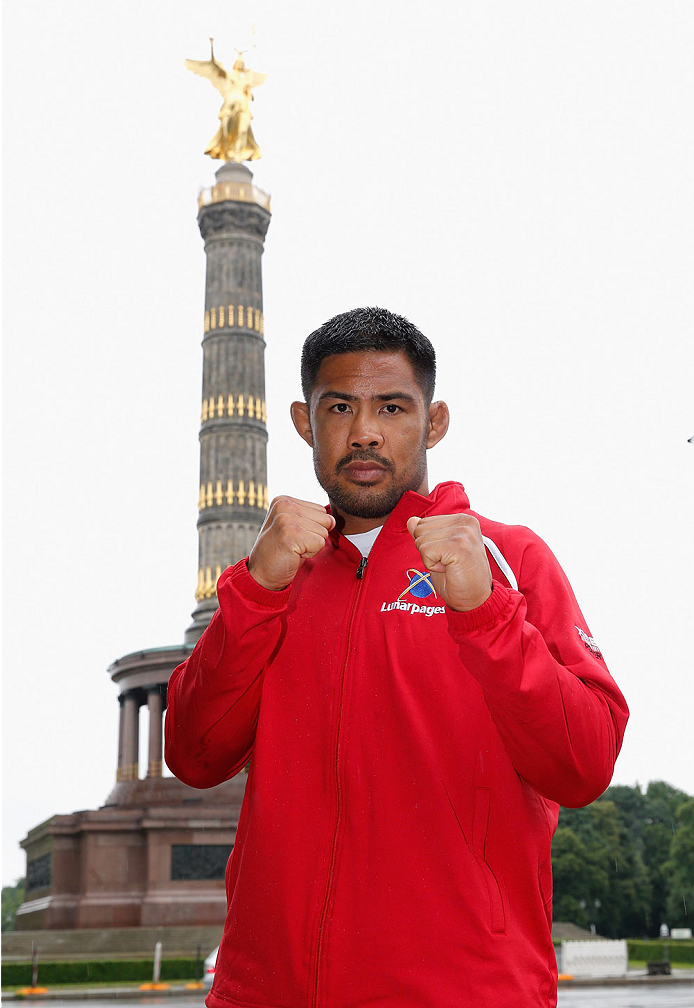 Meine Damen und Herren, Es ist Zeit für eine neue deutche Downes Side! While I can’t promise you that it will be as efficient as a Volkswagen, I can say that it will leave a far better taste in your mouth than Schwarzsauer.

The fighters will have a different type of blood soup on their minds as they file into Berlin, Germany this weekend. The main event of the night features two prominent middleweights as Mark “The Filipino Wrecking Machine” Munoz takes on Gegard Mousasi.  A technical wrestler with KO power in his hands, Munoz’ recent setbacks have knocked him down to #7 in the middleweight rankings. A former Strikeforce light heavyweight champion, Mousasi tries to further that decline. In the co-main event of the night, CB Dollaway tries to get back in the 185-pound picture with a win over the #9 ranked Francis Carmont. Lass uns gehen!

The main card opens in the featherweight division with Tom Niinimaki and Niklas Bäckström. After an impressive debut over Rani Yahya in November, Finnish fighter Niinimaki can run his current win streak to 13. Strong all around, Niinimaki showcased some high level grappling in his first fight. A late replacement for Thiago Tavares, Bäckström may not have the name recognition of Mötley Crüe, but he could submit Nikki Sixx easily.

Despite standing at an impressive 6’1” for the weight class, Bäckström likes to bring the fight to the mat and ground and pound. He’s certainly well-versed there, but Niinimaki is simply better. Even if he’s able to get top position, he won’t be able hold Niinimaki in place long enough to garner any offense. Bäckström wants to put his opponent in a Theatre of Pain, but I’m afraid that he’ll have to ingest a bitter pill. Niinimaki by decision.

We move to middleweight for Luke Barnatt and Sean Strickland. Barnatt has improved tremendously since his time on TUF 17. Holding a 3-0 record inside the Octagon, the 6’6” Englishman batters his opponents with a high striking rate. Strickland, on the other hand, normally looks to beat up his opponents on the ground. “Tarzan” also looked impressive in his UFC debut, where he submitted Bubba McDaniel in the first round via rear naked choke.

Barnatt does land significant strikes at an impressive rate of 7.41 per minute (as a point of comparison, Cain Velasquez is only 6.21). Unfortunately, he defends strikes at a below average rate. Despite his size and reach advantage, he still allows opponents to get inside him. Once insides Barnatt’s long arms, Strickland will be able to get the takedown, advance position and start punching. Even if Barnatt can hold Strickland inside his guard, he won’t be able to finish a submission or avoid damage. Tarzan swings his way to a second round TKO.

That brings us to Francis “Limitless” Carmont and Clarence Byron Dollaway.  Carmont tries to bounce back from his first loss in over six years after “Jacare” Souza smothered him in February. He does have ten submission wins on his record, but Carmont usually grinds out his victories. A TUF 7 veteran and All-American wrestler at Arizona State, Dollaway has really turned the corner in his last few fights. Most notably, he only needed 39 seconds in his last fight to knockout Cezar Ferreira.

Normally when Carmont fights, I try to find reviews of the movie Limitless that mirror my opinion. In this case, though, I found inspiration in another Bradley Cooper film -- American Hustle. Why? Because as strong as Carmont’s striking and grappling can be, he has a low work rate. This leaves openings for opponents to take the initiative, and that’s what Dollaway will do here. He may have only a slight grappling advantage, but pressure and relentlessness will make that gap wider. As long as he doesn’t gas out, the Doberman takes this one by decision.

Time for the main event! Once on the cusp of a title shot, Munoz has lost two of his last three fights, including a first round head kick KO loss to Lyoto Machida in October. Mousasi needs to rebound from a Machida loss of his own. A technical striker who has finished 29 opponents, he’s still looking for his first UFC win since dropping down to middleweight.

Munoz’s strategy is simple. Take top position and ground and pound your way to a win. Mousasi defends only 51% of takedown attempts and Munoz does not have the same striking credentials as Machida to win this in the kickboxing department. The game plan may be simple, but executing it will not. Munoz has the wrestling credentials, but he has not been able to use them enough in an MMA environment, considering he succeeds on only 26.67% of his takedown attempts. Mousasi may not have the explosiveness of Munoz, but he’ll calmly pick his shots over the course of five rounds and take the decision win.

That wraps up another edition of Downs Side that would cause your Oma to jump up and yell, “Wunderbar!” Follow me on Twitter @dannyboydownes. Also, don’t forget to leave your own thoughts, comments, misdirected anger and favorite German beer on the page here, too. I’m a bit biased, but after living in Düsseldorf, my vote goes to the Uerige Alt Bier. Prost!