The Downes Side: UFN Auckland Predictions 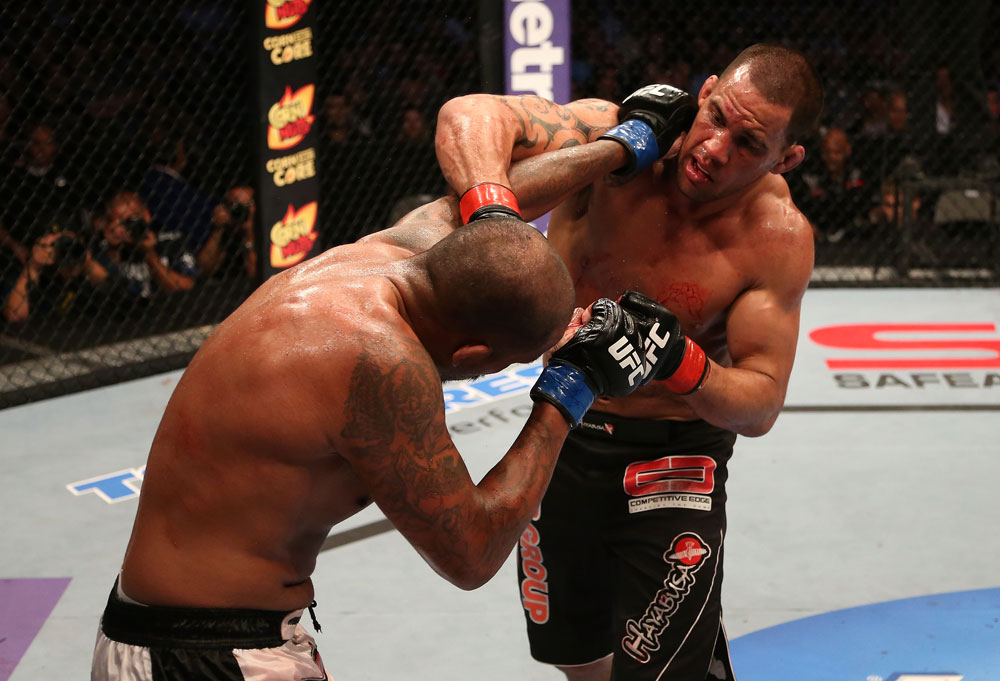 That’s right boys and girls, it’s time for a New Zealand edition of the Downes Side! If you’re expecting cheap jokes about bloomin’ onions, dingos and the Crocodile Hunter, I have bad news for you.  You’re thinking of Australians.

Toilets may spin the opposite direction in the Southern Hemisphere, but the UFC delivers the same quality on any end of the equator. Live from the Vector Arena in Auckland, New Zealand, expect a great night of fights no matter your latitude. In the main event of the night, hard-hitting middleweights James Te Huna and Nate Marquardt try to bounce back from their losing streaks. In the co-main event, heavyweights Soa Palelei and Jared Rosholt will bring more beef than an Iowa farm convention.

We open the main card in the welterweight division with Robert Whittaker and Mike Rhodes. After losing his last two fights, New Zealand native Whittaker needs to regain the form that helped him win the TUF Smashes series. A well-balanced fighter that beats people with a mixture of submissions and knockouts, Whittaker may have his back against the wall here. “Biggie” Rhodes didn’t have quite the UFC debut he expected last January. He dropped a decision to George Sullivan, but showed off a lot of the striking characteristics that you expect from a Roufusport fighter.

Biggie is a former teammate of mine. Needless to say, I might not be the most objective commentator on this occasion. Objectivity never stopped Skip Bayless from having an opinion, so why should it stop me? Whittaker has an active striking game, however, he tends to step too hard on his jab. He gets heavy on his feet and it prevents him from really extending his combinations. Rhodes still has a lot of growing to do, but he’s an excellent counter striker. He might even be able to sneak in a few head kicks to stun his opponent. Rhodes times Whittaker’s attacks and works his way to a unanimous decision win.

We move to featherweight for Hatsu Hioki and Charles Oliveira. After a tough three-fight losing streak, Hioki won a hard-fought decision over Ivan Menjivar. He has a wide open, entertaining striking style to compliment his 12 career submissions. Oliveira recovered from a losing streak of his own en route to a second round submission win against Andy Ogle in February. Another aggressive fighter, Oliveira’s main skills lie in the submission game. Ten of his wins have come via tap out, and he even is one of the few people to pull off a calf slicer in competition (no, that’s not a machine at your local butcher’s shop).

Both of these fighters don’t waste any time going at their opponents. When you have competitors that like to charge forward, offensive power is the deciding factor. Hioki may have a lot of finishes on his record, but all of his UFC fights have gone to decision. He can survive; he just can’t put that exclamation point on a fight. Oliveira only finishes his sentence with exclamation points. Sure it may make him an annoying person to text with, but it makes for a hell of a fight! He keeps charging forward and locks up a second-round submission for the win!

We jump up to the big boys for the co-main event. Undefeated in his second UFC run, Soa “The Hulk” Palelei smashes opponents with heavy hands and brutal ground and pound. A standout wrestler at Oklahoma State, Jared Rosholt has never experienced defeat in his time inside the Octagon either.  Whereas Palelei charges straight forward trying to finish, Rosholt takes a more measured approach and uses his wrestling background to wear opponents out.

Many fans still doubt Palelei’s abilities due to his debut against Nikita Krylov, a fight that people have dubbed, “The Miracle in Milwaukee.” Okay, by “many” I really mean myself and this one guy I met at the train station, but two individuals still constitute the plural of person. On paper, it may seem ridiculous to think that The Hulk could put Rosholt on the mat. Based on the video evidence, though, it doesn’t seem like that crazy of a proposition. Sometimes the skills that work in the NCAA don’t transfer to the Octagon. Expect Palelei to fight the same way he always does. He’ll charge forward, plant Rosholt on his back and punch his way to the first round TKO.

Time for the main event! After winning five of his first six fights in the UFC, James Te Huna was on the brink of light heavyweight superstardom. Two straight losses to Glover Teixeira and Shogun Rua have halted that momentum and prompted him to drop to the middleweight division. The hardest hitting Kiwi on the planet, Te Huna also defends 67% of opponent's takedowns. Marquardt also has something to prove after two straight first-round TKO losses to Jake Ellenberger and Hector Lombard. A former Strikeforce champion, Marquardt is back at 185 pounds, and he can always threaten with a KO of his own.

Whenever a fighter drops two fights in a row in the fashion that Marquardt has, you have to wonder about their ability to absorb a punch. Unlike your ability to watch episodes of Murder She Wrote, it’s not one of those things that gets better with age. Even Angela Lansbury could see that Te Huna still needs some development before he can contend with the 185-lb elite, but he’ll make a small step toward that this weekend. He lands more strikes at a higher accuracy, and his volume advantage will wear Marquardt out. Te Huna locks up the TKO in the second round.

That wraps up another Lucy Lawless-caliber edition of the Downes Side. Follow me on Twitter @dannyboydownes. Also, don’t forget to leave your own predictions, comments, queries and favorite Flight of the Conchords song on the page here. It’s hard to choose just one, but this is definitely in my top three.