The Downes Side: UFN Albuquerque Predictions 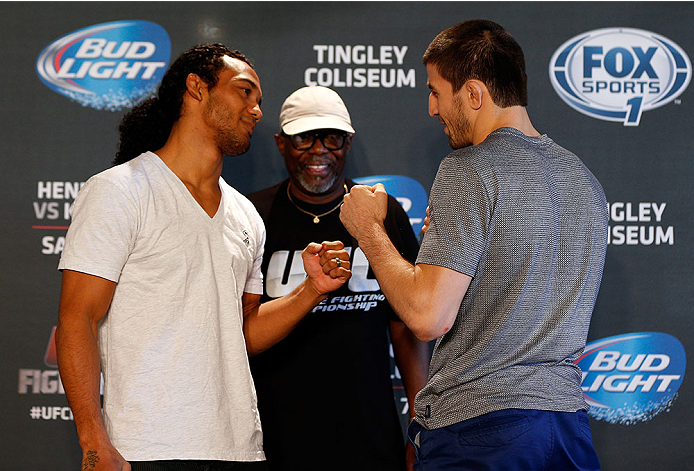 Brace yourself boys and girls, it’s time for an Albuquerquean edition of the Downes Side. That’s right, DBD is here to answer all your FAQs about the UFC in ABQ ASAP. There will be TUF stars (who may or may not like EDM) trying to prove who’s the VIP. Head over to your ATM, settle in with some beverages approved by the ABC and food inspected by the FDA because this week’s fights are here, and I suggest that you get excited for this week’s Ultimate Fight Night live from Tingley Coliseum.

The main event of the night has big implications for the lightweight title picture as former champion Benson Henderson takes on the Dagestani suplex machine Rustam Khabilov. In the co-main event of the night, Diego Sanchez and Ross Pearson plan on delivering the Fight of the Night. Don’t forget to set you DVRs, it’s fight time!

We open in the bantamweight division with Erik Perez and Bryan Caraway. After suffering the first loss of his career to Takeya Mizugaki, Perez showed an improved game against Edwin Figueroa. One of the many Jackson-Winkeljohn fighters competing on the card, three of his four UFC wins have been first round finishes. A TUF 14 alum with 16 career wins by submission, Bryan Caraway creates his submission attempts with a strong wrestling game.

Caraway probably has the edge in the pure grappling department, but this isn’t a wrestling match. Perez may not be the most dangerous striker in the division, but he’s balanced and defends attacks at an above average rate. Caraway may call himself “Kid Lightning,” but he won’t be able to close the distance effectively to get the takedown. Perez takes this one by decision.

We move to lightweight for Yves Edwards and Piotr Hallmann. Fighting since his opponent was begging his parents for Pokemon cards, the “Thug-jitsu Master” Edwards needs a strong showing to prove there’s still some tread left on those tires. A strong counter puncher, he’s moved away from using his ground attack despite 15 career submissions. After submitting Francisco Trinaldo in his UFC debut, Polish sparkplug Piotr Hallmann dropped a unanimous decision to Al Iaquinta in October. Another dangerous striker, he converts his takedowns at a 45.45% average.

Edwards’ skills can’t be called into question. The only thing that raises suspicion is his ability to take a punch. Unlike a zinfandel or your proficiency at Wheel of Fortune, a fighter’s chin doesn’t get better with age. Having said that, I give him the advantage in this fight. Hallmann has KO power, but his striking style isn’t necessarily fluid. He rushes in with his hands down and Edwards will exploit those openings. Edwards connects with a counter hook and takes this by TKO in the second.

We remain at lightweight for Rafael dos Anjos and Jason High. After five straight wins over fighters like Mark Bocek, Evan Dunham and Donald Cerrone, Rafael Dos Anjos dropped a decision to Khabib Nurmagomedov in April. The craftiest RDA since Richard Dean Anderson, dos Anjos can beat opponents with any offensive tool you can think of (even a gum wrapper if they were legal). Jason High may be riding a two-fight win streak at welterweight, but he decided to give his career an extra boost with a drop down to the 155-pound division. A former Division I wrestler, “The Kansas City Bandit” doesn’t steal victories - he controls opponents with his power.

Even with his power and speed, High can be one-dimensional at times. He can also slow down and let his opponents dictate the exchanges. Dos Anjos is well-versed all around and can take advantage of the KC bandit’s hesitation. He’ll win the striking exchanges and cause High to fight off his heels. This will open up takedowns and other offensive attacks. RDS won’t need MacGyver ingenuity to take this unanimous decision.

That brings us to the flyweight division for a battle between former number one contenders John Dodson and John Moraga. After losing his chance at the title, Dodson bounced back with a first round KO over Darrell Montague. Arguably the hardest hitting 125-pound fighter in world, Dodson has much more than simple power punches. He strikes at a rate around 40% higher than the UFC average and defends over 80% of takedowns attempted. Moraga rebounded from his title loss too, edging out Dustin Ortiz in January.

Whenever you have fighters that hit as hard as these two, anything can happen. Not just because of the KO potential, but also their defensive gaps. That being said, Moraga’s deficiencies tend to be more prevalent. Dodson also stays more active in the middle of the cage and doesn’t stand flat-footed as often. Moraga takes more breaks in a fight and that’s not something you want to do against John Dodson. The Magician delivers the KO in the first round.

Next we head to lightweight for the co-main event. TUF 1 champion, perpetual Fight of the Night candidate and steak tartare detractor, Diego Sanchez has lost three of his last four fights. Most recently he dropped a decision to Myles Jury at UFC 171 in a fight where he couldn’t sustain any prolonged offensive attacks.  Conversely, Ross Pearson has won three of his last four (official) fights. His last fight in the Octagon ended via no contest after absorbing an illegal knee. A disciplined boxer, all his wins are evenly divided between KOs, submissions and decision.

Diego Sanchez’s fight strategy doesn’t change from fight to fight. He charges forward and tries to goad opponents into a brawl. Ross Pearson has the technical ability to win the fight, he just needs enough discipline to not get into a firefight. He also needs to circle away from Sanchez instead of moving in straight lines and backing himself into a corner. Even if that were to happen, Pearson still defends takedowns at nearly an 80% efficiency rating. The Englishman sticks and moves his way to a unanimous decision.

Time for the main event! The baddest man to rock the toothpick since Razor Ramon, former champion Benson Henderson continues his quest back to a UFC title. In his first fight since losing the belt, he pulled off a split decision win over Josh Thomson. With the third highest takedown accuracy in the UFC, people still often discount Smooth’s considerable size and power for a 155-pound fighter. It may be the biggest fight of his career, but Rustam “Tiger” Khabilov hasn’t shown any weaknesses during his three UFC fights. Known for his devastating suplexes, he showed off his striking skills in a win over Jorge Masvidal in November.

The Masvidal fight proved a lot about Khabilov. He wasn’t able to dominate with his sambo, yet he still found a way to remain dangerous. Benson Henderson is still one of the best lightweights in the world, but I think this is a bad matchup for him. He likes to slow cook opponents and wear them down. He won’t be able to do that to Khabilov. At distance Henderson has the more dynamic style, but he won’t be able to keep Khabilov away. The majority of this fight will be spent in the clinch and against the fence. In that case, I’m taking Khabilov by decision.

That wraps up another AAA edition of the Downes Side. Follow me on Twitter @dannyboydownes. Also, don’t forget to leave your own predictions, displeasures, vacillations and acronyms on the page here. The best AOL comment will be forwarded to my CoS at the MOB.