The Downes Side: UFN Adelaide Predictions 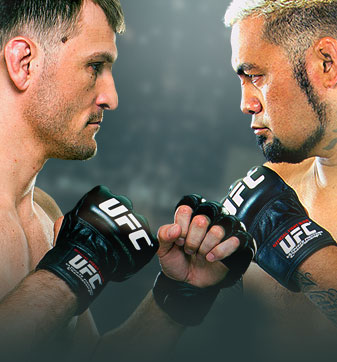 That’s right boys and girls, it’s time for another Australian edition of the Downes Side! More fun than a box of Tim Tams and a slab of Fosters, this one promises to be a ripper.

Stop by your local Servo for some late night Vegemite, because this weekend’s main card kicks off at 11PM Eastern Daylight Time Saturday (that’s 1:00PM Australian Eastern Standard Time Sunday). The main event of the evening is a heavyweight clash between Mark Hunt and Stipe Miocic. Both fighters are coming off losses, but they can still stake a claim at the elite end of the heavyweight ladder. In the co-main event of the night, middleweights Robert Whittaker and Brad Tavares square off. Holy dooley! It’s fight time!

We begin the main card in the lightweight division with Jake Matthews and James Vick. A competitor on TUF Nations, Matthews is 2-0 in his UFC career. He’s finished opponents in eight of his career wins, with four of them coming via submission. A rangy fighter with a solid jiu-jitsu base, James Vick is 3-0 inside the Octagon. He also shares a nickname with runners up in the 2013 Women’s Flat Track Derby Association championship. Although we can all agree he’s no “Olivia Shootin’ John.”

At 6-foot-3, (190.5 cm for our metric system friends) Vick has a considerable reach advantage over the 5-foot-9 (175.26 cm) Matthews. Just because you have the reach advantage, though, doesn’t mean you know how to use it. His last fight against Nick Hein showed some improvement, but he still leaves himself open to counter attacks. Especially after he kicks, Vick pauses and doesn’t get his legs back under him. Matthews may still be a bit raw, but the 20-year-old will use that to his advantage. He’ll charge forward with his youthful aggression, initiate the tie up, and drag Vick to the ground. Matthews takes top position and controls his way to a unanimous decision.

Next we move light heavyweight for Anthony Perosh and Sean O’Connell. At 42 years old, Perosh still proves the doubters wrong by showing that he still has some tread left on the tires. All his career wins have come by KO or submission (13 of them in the first round). After starting his UFC career with two straight losses to Ryan Jimmo and Gian Villante, O’Connell came back with a third round TKO over Matt Van Buren in January.

While others let their petty personal issues cloud their judgment, the Nostradamus of MMA is immune to such trivialities. That being said, it’s hard for me to be objective when it comes to O’Connell. Why? 1) His nickname is “The Real OC.” 2) Every time I hear it, I can’t get that stupid Phantom Planet song out of my head.

Perosh doesn’t have the best striking defense and he is prone to TKO losses, but O’Connell struggles with his punching accuracy. He has a high output, but that’s because he’s wild. Despite his 14-second KO win, Perosh is a submission guy first and foremost. He’ll find a way to bring the fight to the ground and lock up the first round rear naked choke win.

Next we move to middleweight for Brad Tavares and Robert Whittaker. A grinding, pressure fighter, Tavares got back into the win column by defeating Nate Marquardt at UFC 182. The winner of TUF Smashes, Whittaker decided to move up a division after compiling a 3-2 record at welterweight. Many wondered if he would have enough power at 185 pounds, but those fears were put to rest when he KO’d Clint Hester back in November.

Brad Tavares is solid everywhere, but doesn’t have one particularly overwhelming skill. He’s only finished one opponent in his 11-fight UFC career (the poet Philip Baroni). Whittaker may still fall into the trap, but his speed and footwork should prevent him from getting pushed against the cage. As long as this fight takes place in the center of the Octagon, Whittaker’s more diverse striking attack leads him to the decision win

Time for the main event! Stipe Miocic may have lost to Junior Dos Santos his last time out, but he can regain a lot of that momentum with a win here. One of the more athletic heavyweights in the division, he also has eight career knockouts. At first glance, Mark Hunt’s record may not look like that of a top 5 heavyweight. If you only look at his fights inside the UFC, though, he holds a 5-3-1 record against top tier competition. A hard-hitting kickboxer, the only thing Hunt grapples with is whether or not he wants to give one-word or two-word answers in interviews.

Mark Hunt has one-punch KO power. If his left hook connects flush, it’ll be a short night for Miocic. You have to wonder, though, if Hunt can find the mark (pun actually not intended this time). The Super Samoan is still an excellent striker, but the 41-year-old has lost a step or two. His timing just isn’t the same. And in fighting, a split second slower is the difference between a KO and a glancing blow. So far it’s been a clean sweep for Team Oceania, but Miocic saves the day for North America. Miocic will fight smart, avoid prolonged engagements and drag Hunt into the later rounds. Miocic by third round TKO.

That wraps up another Downes Side that even a Bunyip would enjoy. Follow me on Twitter @dannyboydownes. Also, don’t forget to leave your own predictions, questions, exhortations and differences between Australians and New Zealanders on the page here.