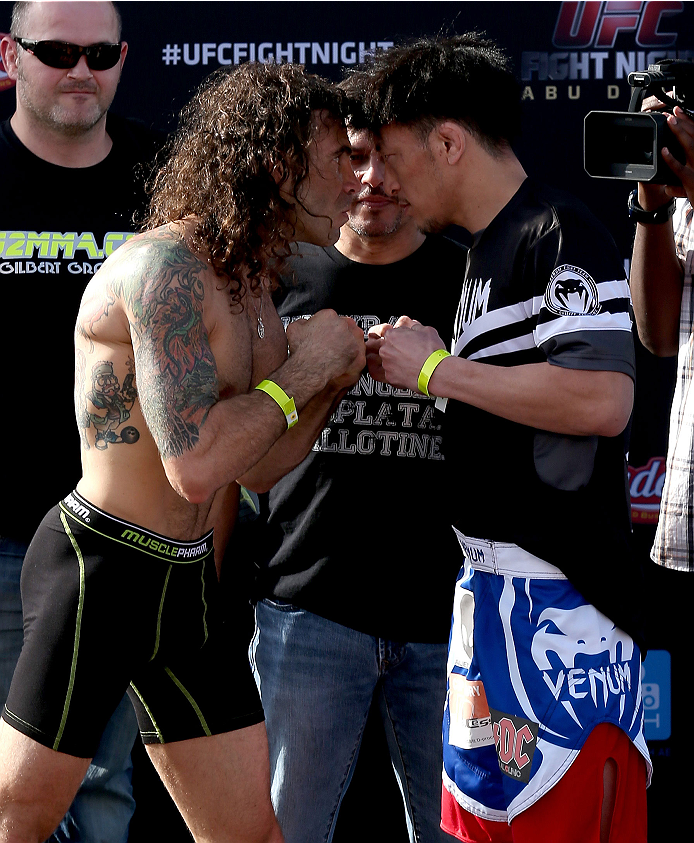 That’s right, boys and girls, it’s time for another edition of the Downes Side! All good things must come to an end, but luckily for all of you the Nostradamus of MMA is here to stay. Some would argue that means the Downes Side isn’t a good thing, but deductive reasoning is overrated.

Elton John may have said that Saturday night is all right for fighting, but Friday works just as well. This week we have Ultimate Fight Night live from Abu Dhabi in the United Arab Emirates. The main event of the evening pits “Big Nog” and “Big Country” against one another as heavyweights Antonio Rodrigo Nogueira and Roy Nelson square off. The co-main event of the night features Clay Guida and Tatsuya Kawajiri battling for position in the featherweight division.

The main card kicks off with lightweights Ramsey Nijem and Beneil Dariush. An accomplished wrestler, Nijem bounced back from back-to-back losses to Myles Jury and James Vick with a unanimous decision win over Justin Edwards in January. He possesses a strong top game and does very well in scrambles. An experienced jiu-jitsu practitioner, Dariush made his UFC debut in January with a first round submission over Charlie Brenneman. He’s finished six of his career opponents and has only gone out of the first round twice in his short career.

Neither one of these fighters are proficient strikers. Both leave considerable openings on the feet, which could cost them. The question then becomes, “Who will slip up first?” Nijem has an extremely aggressive style and consistently charges forward against opponents. He has the skills to put Dariush on his back, advance position and batter his opponent. What’s more likely, though, is that one of Dariush’s looping punches connects as Nijem moves on the inside and stuns him. From there, Dariush will pounce on his opponent and finish him with a D’arce choke in the second round.

We move to welterweight for John Howard and Ryan LaFlare. Undefeated during his second stint in the UFC, Howard holds recent wins over Uriah Hall and Siyar Bahadurzada. Heavy handed with brutal ground and pound, “Doomsday” has the type of power that can end a fight in an instant. Despite having the last name that makes me think of a French-Canadian pro wrestler, New Yorker LaFlare has an undefeated record of his own.

LaFlare has had some early success, but this is the first time he’s faced someone with Howard’s stopping power. Howard may not be as technically sound in the grappling game, but he has enough knowledge to defend the first few takedowns. Once he stifles LaFlare’s shots, he’ll be able to unload his punches and stun him. LaFlare does set a steady pace, so Howard has the potential to gas out if he can’t get the early finish. If that happens, LaFlare can pick up the unanimous decision, but plan on watching Howard ground and pound his way to a second round TKO.

We drop down to featherweight for Clay Guida and Tatsuya Kawajiri. The Carpenter is searching for a win like Union Local 13 does their monthly dues. He’s lost three of his last four and really needs a win here. The losses may have come at the hands of top 10 fighters, but that’s of little solace to “The Carpenter.” He’s even coming off the first KO loss of his career against Chad Mendes at UFC 164. Tatsuya “The Crusher” Kawajiri has had a storied MMA career in Japan. The 35-year-old made his UFC debut in January against Sean Soriano, and locked up the rear naked choke submission 50 seconds into the second round.

Guida sets a hard pace and moves awkwardly. His strikes may not present a significant KO threat, but they do allow him to move inside and secure the takedown. Given his last performance against Mendes, there are legitimate questions concerning Guida’s chin, but Kawajiri is not known as a punishing striker. Guida’s power will be the difference here. You can expect him to charge forward, put Kawajiri on his back and stifle any offensive attempts from the former Shooto champion. Guida probably won’t be able to advance position, but he’ll do enough to earn the unanimous decision win.

Time for the main event! An MMA legend, “Minotauro” Nogueira has had a rough run as of late. With only eight fights since 2008, the 37-year-old has traded off wins and losses, and has even been submitted twice during that run. Roy Nelson hasn’t had much luck either with two straight decision losses to Stipe Miocic and Daniel Cormier. Despite both fighters’ recent struggles, they’re still a pair of the heavyweight division’s finest and at least one person has to win. I’m one of those glass half-full kind of guys.

Both fighters have tremendous jiu-jitsu prowess. The fight begins on the feet, though, so whoever can control the striking will win this fight. Neither fighter is what we would call active. They both like to stand in front of opponents and don’t keep their footwork busy. Despite Big Country slowly devolving into “Above Average Country,” he still has that KO power in his right hand. His trademark overhand right will find its mark and it will do damage. Nogueira will weather the storm for the first few rounds, but eventually the assault will become too much for him to handle. In the third, Nelson’s punches find their mark and drop Minotauro. Nelson will follow up with a few ground shots, and lock up the third round TKO.

That wraps up another plausible edition of the Downes Side. Follow me on Twitter @dannyboydownes. Also, don’t forget to leave your own thoughts, predictions, disappointments and favorite rules of logic on the page here. I’ll go with modus ponens because it sounds dirty.