The Downes Side: UFC Rio Predictions 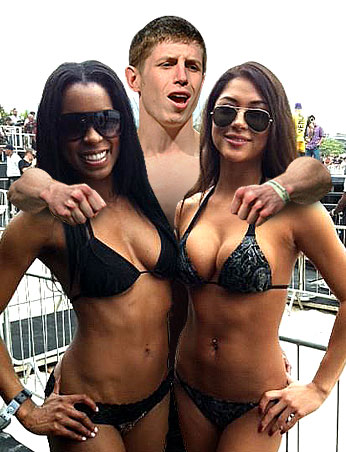 That’s right everyone, the Downes Side is back. I believe the first column went well, judging by the fact that my family downgraded my abuse from condescending remarks (e.g. "When are you going to get a real job?") to backhanded compliments (e.g. “Nice to know your head’s good for more than getting punched.”). The slight increase in respect was even more impressive considering my picks went 0-4. Statistically speaking, however, that's just as difficult as going 4-0, so at least I have that.

This weekend the UFC is rolling into Rio. I was hoping that maybe they'd send me so I could type this from a beach in Brazil instead of the public library -- after all, didn't Zuffa save a bunch of money by not having to hire Blackwater to protect Chael Sonnen from angry Brazilians? Plus I assume that Brazilian women have a bunch of jacked up tan men surrounding them, so they’d like to change things up with a pale, skinny internet columnist. Well, shocking but true, I'm stuck here in Wisconsin and the picture above is Photoshopped. Still, a guy can dream, can’t he?

Barboza vs Etim
The main card kicks off with a lightweight matchup. Terry Etim enters after a 17 second submission win against Edward Faaloloto at UFC 138; undefeated Edson Barboza comes off a controversial decision (outside of Brazil, anyway) victory over Ross Pearson in August.
This fight boils down to the freakish athleticism and power of Barboza
against the finesse and technique of Etim.

Prediction: Barboza is stronger, faster and more explosive, but Etim has the advantage in pale gangly limbs (something I respect in a fighter). In this early stage of his career, Barboza is still one-dimensional and Etim will take advantage. Barboza will come out wild, Etim will weather the storm, secure a takedown and finish it by submission in the first. (Barboza will totally own Etim in the swimsuit competition, though.)

Silva vs. Prater
The next bout takes place between welterweights Erick Silva and Carlo Prater, and what this fight lacks in name recognition, it makes up for in Fight of the Night potential. Silva recently scored a first-minute TKO in his UFC debut. He hasn’t lost in more than five years, has great stand-up skills, and seven of his 13 wins have come via submission. He’s also a former Jungle Fight champion, which I assume is some type of guerrilla warfare competition. Prater (29-10-1) is a former top contender for the WEC welterweight title, comes from a Muay Thai background, and has also won over half his fights by submission.

Prediction: This could be one of those fights where you’ll wish it were five rounds instead of three. Unfortunately for the Jungle Fight champion, the Brazilian athletic commission is just as strict as Nevada’s with regards to its “no firearms” policy. Prater will outgun the younger fighter and take it by unanimous decision.

Palhares vs. Massenzio
Next up we have Rousimar Palhares vs Mike Massenzio. The one wildcard here is, well, wildcard Rousimar Palhares. Whether it be the premature celebration against Dan Miller, the complete lapse against Nate Marquardt or his holding on to submissions for too long, let's just say few would blink if his next walkout kit included a tin foil hat to block thought-stealers. Most people are counting Massenzio out, considering this a “gimme” fight to set up Palhares for a contender matchup next.

Prediction: Normally, I hate to agree with most people. That’s why I listen to bands you’ve never heard of (even when I don't like them) and refuse to wash my hands after using the bathroom. In this case, though, they’re right about the outcome. "Toquinho" (or “Torquinho” if you choose to dwell on his joint-dislocation abilities) will be mentally focused come Saturday night and will finish it in the first with one of his patented leg locks.

Belfort vs. Johnson
Anthony Johnson will make his eagerly anticipated debut at middleweight (or is it light heavyweight?) against Vitor Belfort. Even in this new division, “Rumble” will be the bigger, stronger competitor. Belfort, after falling victim to Anderson Silva’s super-secret Steven Seagal front kick, rebounded with a big KO of Yoshihiro Akiyama in August and will have the advantage in hand speed, defense and (definitely) experience.

Prediction: Belfort hasn’t had a fight go the distance since 2007 and he won’t start 2012 with one either. The key here will be Belfort’s ability to use his footwork and attack from angles. Johnson is definitely strong enough to move up in weight class(es), but he’s in for rough introduction. Belfort wins by TKO in the first and Johnson calls up Charles Barkley for some diet tips.

Aldo vs. Mendes
That brings us to the main event of the evening. Jose Aldo is making his fifth title defense (and third in the UFC) against Chad “Money" Mendes. After going on a KO tear, the fact that Aldo has gone to a decision his last couple of bouts has diminished his aura of invincibility. Still, the champ is extremely dangerous. Mendes, an elite wrestler with an undefeated record against top dudes, has the skill set to take the title away.

Prediction: For Chad Mendes to win, and I think he will, two things are necessary: conditioning and judging. If he can keep a solid pace for five rounds he’s going to take Aldo down and grind him and get the decision victory. Picture this as a featherweight version of Silva vs Sonnen, but without the fifth-round Hail Mary triangle. The hometown fans won’t like it, but on the bright side, I picture Mendes' Team Alpha Male victory party to look like a mini version of an LMFAO video, which should be fun.

That concludes this iteration of the Downes side. Feel free to leave some comments, although the last batch (a la “YOUR WRITING SUX!!!!!!!”) was about as helpful as the pre-flight safety checks on an airplane. It's the internet, so I understand the compulsion to try and hurt my feelings. Please remember, though, I'm an expert in psychological warfare – I went to Catholic school.