The Downes Side: UFC London Predictions

That’s right mates and birds, it’s time for another conclusive edition of the Downes Side! As people throughout the world celebrate Valentine’s Day weekend (or attempt to, as is the case of my wife), I have eschewed the flowers and candles for my computer and a mission to deliver the facts as only the Nostradamus of MMA can.

This weekend the Ultimate Fighting Championship returns to the United Kingdom for UFC on FUEL TV live from Wembley Arena in London. The main event will be for the interim bantamweight title as current holder Renan Barao looks to continue his reign against Michael “Not The One Who Sings 'I Gotta Try'” McDonald. The co-main event of the night takes place in the featherweight division as likely title contenders Cub Swanson and Dustin Poirier face off. 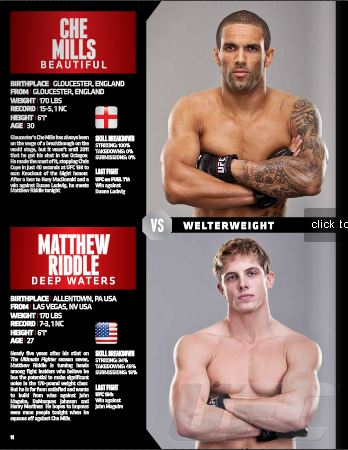 To kick off the main card, we have “Beautiful” Che Mills taking on the future president of the United Kingdom’s Tourism Board -- Matthew "Deep Waters" Riddle. Mills is 2-1 in his UFC career including wins over Duane Ludwig and a Knockout of the Night performance against Chris Cope. A former TUF 7 star, Riddle has spent his entire professional career inside the Octagon, using a mix of wrestling and conditioning to wear down opponents.

Riddle has capable striking, but Mills has the complete advantage on the feet. Riddle needs to bring this fight to the ground, and he will. He has shown that he possesses a strong enough chin to close the distance even if he catches a solid strike. Once he ties up Mills, he’ll easily get it to the ground and utilize his grappling skills. Riddle has been working more with Robert Drysdale, so it will be interesting to see how his submission game has advanced. As long as he doesn’t get stuck with one of those crooked British referees, Riddle should take the unanimous decision.

Ryan Jimmo (17-1) vs James Te Huna (15-5)
Next we head to the light heavyweight division for Ryan Jimmo vs James Te Huna. Te Huna has used his powerful striking to earn 10 career TKOs. In his most recent outing, he secured a decision victory over the nearly-impossible-to-drop Joey Beltran in July, but had the fight in cruise control for the majority. Ryan “Big Deal” Jimmo has been on a 17-fight win streak since dropping his professional debut in 2007. Also a dynamic striker, Jimmo tied the UFC record for fastest knockout with his one-punch destruction of Anthony Perosh at UFC 149.

Don’t let Jimmo’s seven-second finish of Perosh fool you into thinking he’s some knockout powerhouse. I mean, Diana Duyser once had a grilled cheese with the image of the Virgin Mary imprinted into it, but that doesn’t mean it happens all the time. The more likely scenario 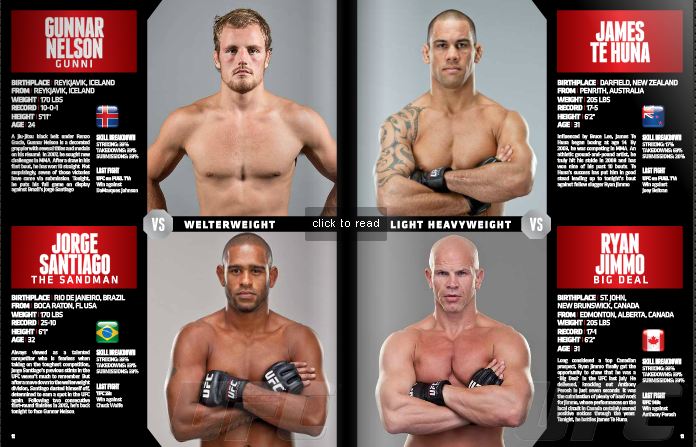 is that Jimmo uses his kicks and straight punches to keep Te Huna at a distance. Known for shaky cardio, Te Huna will fade in the later rounds and Jimmo will notch a decision win. No, it’s not as cool as a food product with the Mother of God on it, but a grilled cheese sandwich is still a delicious grilled cheese sandwich.

Gunnar Nelson (10-0-1) vs Jorge Santiago (25-10)
We jump down to the welterweights as one of Europe’s most anticipated prospects, Gunnar "Not the One Who Sings 'Love and Affection'" Nelson, looks to continue his climb with a win over veteran Jorge Santiago. Having finished his opponent in all ten victories, 'Gunni' made his UFC debut in September with a first-round RNC victory over DaMarques Johnson. Making his UFC debut at welterweight, Santiago looks to make his third stint in the Octagon a successful one. Extremely well rounded, Santiago has ten KO and 13 submission victories to his storied career.

Despite being in the MMA game for over a decade, Santiago still brings a lot of skills to the table. He can beat you in the clinch, at a distance and on the ground. Having said that, he’ simply outmatched here. It’s like trying to fight adorable animal pictures, -- you just can’t do it. The younger, more aggressive Nelson will take control from the outset and never give it up. He’ll put Santiago on his back and use that BJJ black belt he earned from Renzo Gracie to finish things in the second.

Jimi Manuwa (12-0) vs Cyrille Diabate (19-8-1)
We move back up to light heavyweight for a matchup between two lethal strikers. After finishing all of his opponents -- all but one via knockout -- Jimi “Poster Boy” Manuwa has quite the reputation. The only knock against him has been conditioning, but with only three of his fights making it out of the first round, it’s hard to determine how much of an issue that might be. Standing across him will be French kickboxer Cyrille “The Snake” Diabate. In his most recent outing, the 39-year-old submitted Mr. Mutton-chop himself, Chad Griggs, in the first round with a rear-naked choke. 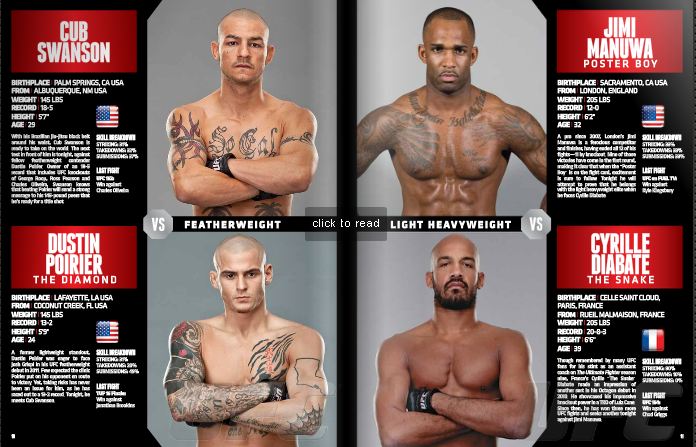 want to avoid cognitive dissonance, read Scientific American). Diabate will be able to use his 6’6” frame to keep Manuwa at bay long enough to take him into deep waters (not "Deep Waters" -- that would be weird.). Once there, he’ll exploit the Poster Boy’s weak stamina and secure another rear-naked win.

Cub Swanson (18-5) vs Dustin Poirier (13-2)
Next up is a fight between potential featherweight title contenders as Cub Swanson faces off against Dustin “The Diamond” Poirier. Winner of his last three (all by T/KO) Cub Swanson has shown a resurgence almost as impressive as Lazarus'. Stepping in for Dennis Siver, Poirier returned to his normal winning ways with a first round submission over Jonathan Brookins at the TUF 16 Finale.

This has been one of the more difficult fights to decide. It’s like deciding between boxers and briefs. Both have their pros and cons, but once you choose one, you’re stuck in it the entire day. After much careful deliberation, I’ve decided to go with Cub Swanson. In the Chan Sung Jung fight, Poirier seemed unable to deal with an aggressive striker. Not only does Swanson have thunder in his hands, he possesses much better footwork than the Korean Zombie. Swanson will use his speed advantage to avoid prolonged tie-ups and utilize his boxers' boxing to damage The Diamond. Poirier certainly showed endurance against Jung, but Swanson drops him in the 2nd. 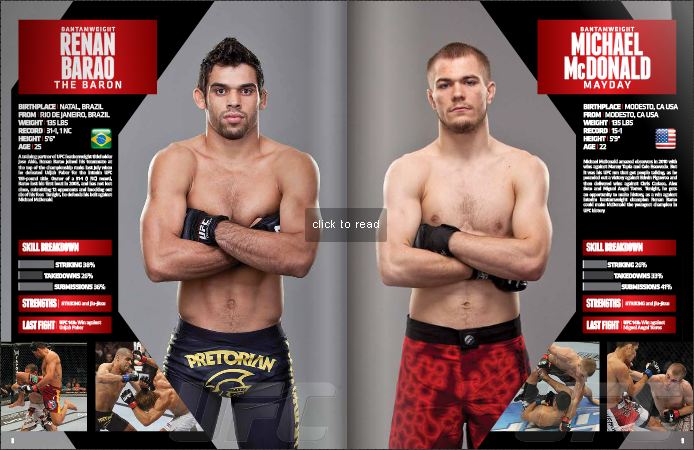 Time for the main event of the evening as interim bantamweight champion Renan Barao puts his title on the line against Michael “Mayday” McDonald. Undefeated in his UFC career, Barao earned the belt at UFC 149 with an impressive victory over Urijah Faber where he controlled the striking and stuffed all of the California Kid’s takedown attempts. McDonald has used his hands to work his way up the featherweight ladder, including a handy KO of Miguel Torres at UFC 145.

McDonald has been very impressive in his career, but Barao might be too much too soon. The difference maker here will be McDonald’s right hand. The dangerous appendage he used to put out Miguel Torres might be enough to turn the tide of battle... but I doubt it. Barao simply has too much speed and has never shown the defensive lapses that McDonald’s previous opponents have. Look for the Brazilian to neutralize all of McDonald’s attacks en route to a UD win.

Well that wraps up another lovely edition of the Downes Side! Be sure to follow me on Twitter @dannyboydownes and leave you thoughts, comments, predictions and belated Valentines on the page, too. As for me, I’m going to try to figure out how to fall asleep on my undersized couch.