The Downes Side: UFC Japan Predictions

That’s right boys and girls it’s time for another Japanese edition of the Downes Side! It may not be as adorable as Hello Kitty, but I’d like to think it has just as many merchandising possibilities.

The UFC merchandise table (and I suppose the fighters) sets up shop in Japan for UFC on FUEL TV 8 live from the Saitama Super Arena in Tokyo. No stranger to the venue, Wanderleia Silva returns to Japan looking to recapture some of that old magic. Standing across from him will be former WEC light heavyweight champion and "All-American" Brian Stann (who was born on a military base in Japan). The co-main event pits two heavyweights on win streaks against one another as Stefan Struve takes on Mark Hunt. 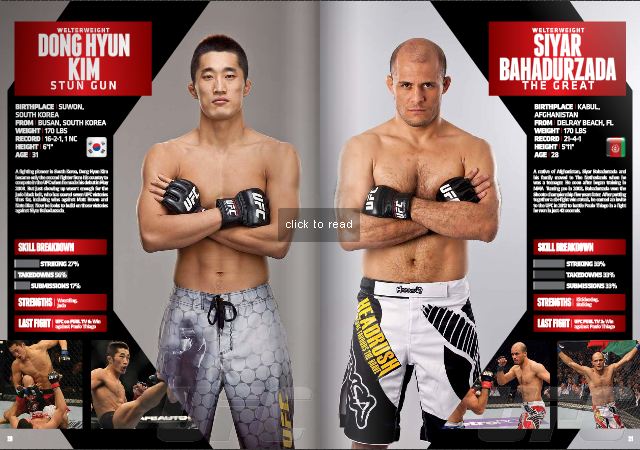 The main card kicks off in the welterweight division with a match between Dong Hyun Kim and Siyar Bahadurzada. The UFC’s greatest grinder since that time Mike Goldberg made a killer meatball hoagie, Kim has used his wrestling and top control to earn a 7-2 record in the organization, including his most recent win against Paulo Thiago in Novermber. Living up to his nickname “The Great” (recently changed from the less diplomatic "The Killer") Bahadurzada showcased his powerful striking as he knocked out Paulo Thiago (rough couple fights for him, huh?) in 42 seconds in April.

One of the more powerful 170-pounders in the division, Dong Hyun Kim holds an impressive takedown defense of 80%. What does that have to do with this fight? Absolutely nothing, I just thought it would be nice to say something positive about the Korean before getting down to business. Kim has shown a weakness in the striking game and Bahadurzada is one of the most dangerous hand specialists out there. Siyar will waste no time and punch his way to another first-round TKO. 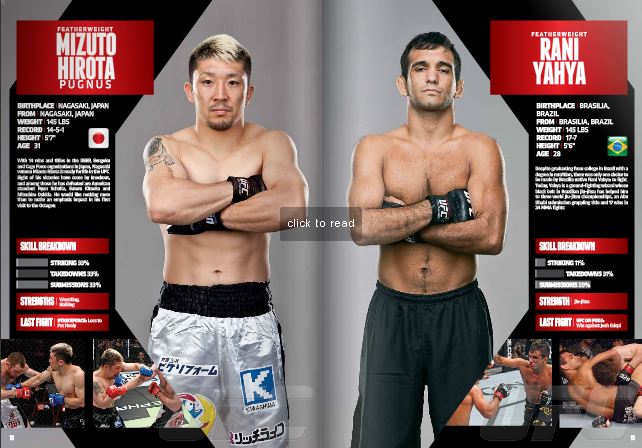 Yahya has that next-level jiu jitsu that could give anyone difficulties. He failed against Chad Mendes, but Hirota doesn’t possess that same level of wrestling. Yahya gets this to the ground quickly and immediately advances position. Hirota exposes his back, Yahya pounces and the Brazilian wins via first-round RNC. 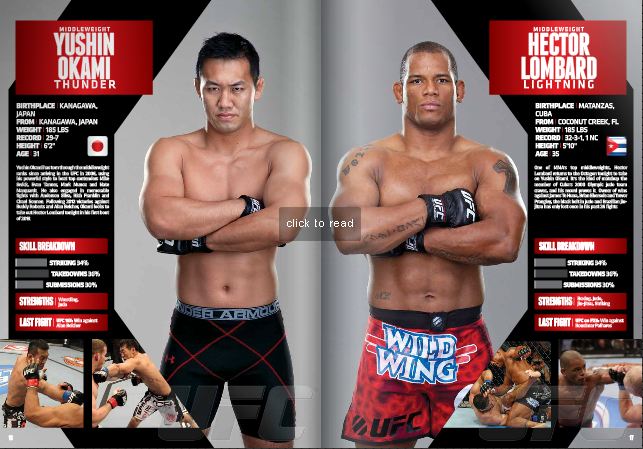 On to the middleweight division for Yushin “Thunder” Okami and Hector "Lightning" Lombard. Okami had already spent the more time inside the Octagon than any other middleweight in UFC history, then padded that record with a unanimous decision win against Alan Belcher at UFC 155. After a UFC debut more disappointing than the first episode of The World According to Paris, Olympic wrestler Lombard returned to his finishing ways with a first-round KO of Rousimar Palhares in December.

Okami uses the same gameplan (take down, hold, repeat) for most of his fights and it’s been fairly successful. People may view Okami’s style as a delay tactic, but he effectively shuts down his opponent’s strengths and completely neutralizes any offense. Lombard is neither the world beater we thought nor the bum others claim, but the Tim Boetsch fight showed that he’s able to be controlled. Lombard’s questionable cardio will hurt him again as Okami survives the first and then controls the 2nd and 3rd rounds en route to another unanimous decision. 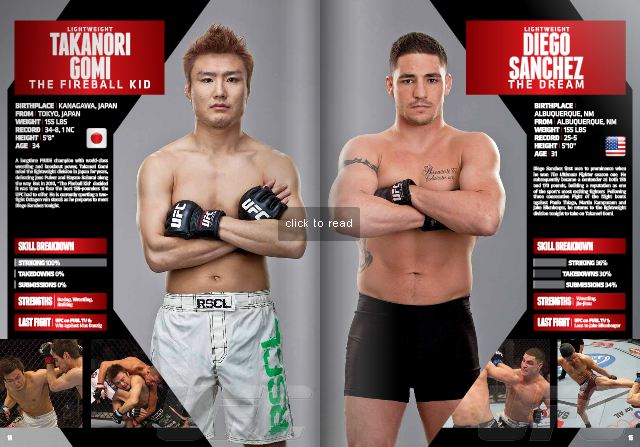 Don’t appreciate technical grappling and calculated top control? Well this next fight should cleanse the palate. After back-to-back losses put his job in jeopardy, Takanori Gomi (aka "The Fireball Kid") rattled off two in a row with victories over Eiji Mitsuoka and Mac Danzig. The mixed martial artist formerly known as "The Nightmare," Sanchez has not competed since losing to Jake Ellenberger over a year ago. Effective in all aspects, Sanchez has consistently proven he has a high pain tolerance and will be making his return to lightweight in this bout.

Gomi has made a career of finishing opponents. Against such a dangerous opponent, the human instinct for self-preservation usually kicks in, but Diego does not hold this same instinct. He’ll stand right in front of Gomi and they’ll get in a firefight. In a fight like this, the man with more power and a better chin wins out... and that’s Diego Sanchez. "The Dream" will push forward and eat lots of punches, but he’ll give back better than he receives. In tight rounds, Sanchez also has the ability to secure the buzzer-beating takedown to steal it away. He’ll earn a couple new scars in the process, but Sanchez will lock up the decision win. 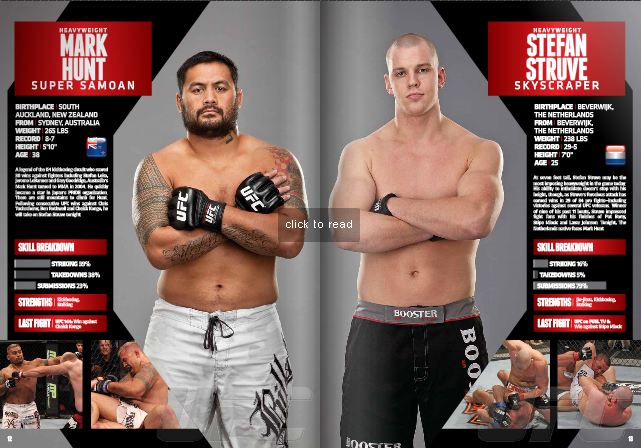 Time for the co-main event of the evening as the most verbose man in New Zealand, Mark Hunt, faces the tallest man in the UFC, Stefan “Skyscraper” Struve. A former K-1 kickboxer, Hunt holds a surprising three-fight win streak including a first-round TKO of Cheick Kongo. Struve has used a mixture of submissions and punches to run up a win streak of his own with wins over Stipe Miocic, Lavar Johnson, Dave Herman and Pat Barry.

Struve has steadily improved during his career, but he still fails to use his (seven-foot!) height to its full potential. The Skyscraper has all the abilities to beat Hunt, but his biggest enemy will be himself. His fight against Travis Browne showed that he’s not exactly the Napolean of the Octagon, and that's a bad move against Mark Hunt. Even if Struve avoids the big counter punch, Hunt is by no means an easy target -- he's stuffed 17 of the 20 takedown attempts against him. He’ll break Struve’s clinch, throw a big right hand and earn the 2nd-round KO. Then I suspect he’ll take the microphone and wow with his oratorial skills. 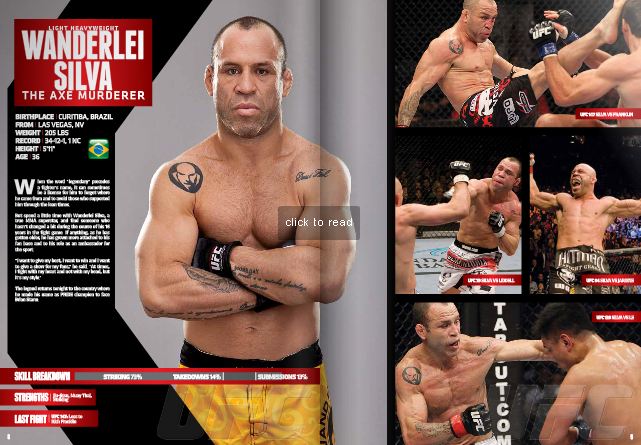 In the main event, Wanderlei Silva returns to the land of PRIDE, where he secured his status as an MMA legend. It’ll be a welcome change of scenery since the Axe Murderer -- who once held an 18-fight win streak in PRIDE -- is 3-7 in his last 10 fights. One of the most accurate strikers in the division, Brian Stann looks to bounce back from a loss to Michael Bisping at UFC 152.

Wanderlei Silva has accomplished some amazing things in his career, but he just doesn’t seem to have it anymore. He excels at wide-open fights that devolve into brawls. Brian Stann is too smart for that, though, and is not the type of fighter to find himself in such a slugfest. Stann will neutralize Silva’s aggressiveness with his wrestling. Once he gets Silva down, he’ll deliver the ground-and-ound and get the 2nd-round TKO.

That wraps up another captivating edition of the Downes Side. Be sure to follow me on Twitter @dannyboydownes. Also, don’t forget to leave your own predictions, comments, queries or favorite Anime .gifs on the page, too.