The Downes Side: UFC on FX 8 Predictions 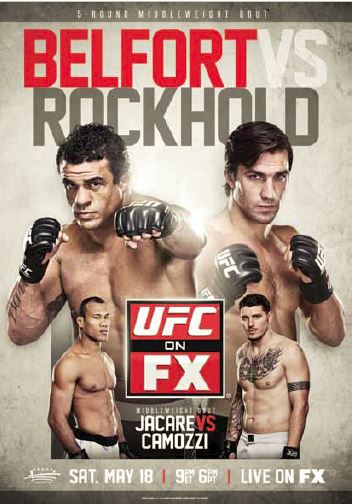 That’s right meninos e meninas, it’s time for another Brazilian version of the Downes Side! Much like their signature waxing treatment, this edition promises to explore sensitive areas, rip off  unwanted excess and ultimately be uncomfortable.

The UFC returns to Brazil for UFC on FX 8, live from Arena Jaragua in the Brazilian state of Santa Carina, a place much more enjoyable than your everyday epilation. The main event features a middleweight clash as Vitor “The Phenom” Belfort looks to make Strikeforce transplant Luke Rockhold’s premiere worse than Oogieloves in the Big Balloon Adventure. In the co-main event, another pair of middleweights square off as Ronaldo “Jacare’ Souza tries to make a statement in a UFC debut of his own against Chris Camozzi.

Rafael Natal (15-4-1) vs Joao Zeferino (13-4)
The main card begins as it ends, in the 185-pound division. Rafael “Sapo” Natal, whose nickname means "toad" in Portuguese, takes on Joao “The Brazilian Samurai” Zeferino, whose nickname translates roughly to "a samurai from Brazil." Natal looks to keep the momentum going after earning his eighth career submission win via arm triangle against Sean Spencer in January. Zerferino is a fellow submission ace with BJJ world champion credentials.

Taking the fight on short notice, not much is known about Zeferino, but, I dug deep and found out more about this mysterious Brazilian (and by "digging deep" I mean that I trained with him for a number of years at Roufusport). While Natal does possess solid jiu jitsu skills, Zeferino is on a different level. Sapo's best chance at winning will be to keep his distance and box. But his overaggressive style will make that tough, and when he can't resist rushing in, Zeferino will tie up, bring the fight to the ground and do what he does best. Jo Z (as we called him because we couldn’t pronounce his first name correctly) wins via heel hook in the second.

Rafael Dos Anjos (18-6) vs Evan Dunham (14-3)
We drop down to lightweight for a battle between jiu-jitsu black belts Rafael Dos Anjos and Evan Dunham. More than a one-trick pony, Dos Anjos has slowly improved his boxing and also showcased impressive wrestling in his most recent win against Mark Bocek. Another well-rounded fighter, Dunham’s style normally leads to entertaining scraps, netting him (and his bank account) three Fight of the Night bonuses. Now 7-3 in his UFC career, Dunham’s most recent win came via a hard-fought split decision win
against the largest arms in the lightweight division -- Gleison Tibau.

Both fighters have strong submission games, but the odds of this fight hitting the mat are slim. Dos Anjos and Dunham are 3rd and 4th respectively in terms of takedown defense among lightweights. When two grapplers stalemate, it usually leads to (gloriously) ugly standup fights. That won’t be the case here, as both fighters have the all-around skills to make this an early favorite to give Dunham another FOTN. This will be a back-and-forth scrap that comes down to conditioning. Based on Dunahm’s match with Tibau, Dos Anjos appears to hold the advantage here and that will propel him to a unanimous decision victory.

Ronaldo Souza (17-3 1NC) Chris Camozzi (19-5)
We return to middleweight for Ronaldo “Jacare” Souza and Chris Camozzi. After a 7-1 run in Strikeforce during which he won the middleweight title, Jacare steps into the Octagon for the first time. A native Brazilian with an intense ground game (surprise surprise) he does possess one-punch knockout power (just ask Derek Brunson). Originally a short-notice replacement to face Cezar "Mutante" Ferreira, then Rafael Natal, Camozzi stepped up yet again after Constantinos Philippou was injured. A volume striker on the cusp of breaking the UFC record for career leg kicks (he’s just five short of Chris Leben), three of his five career losses have come via submission.

I think Camozzi will prove a lot of MMA fans wrong. I mean, the majority of people believe that Christopher Columbus proved that the Earth is round. Camozzi, on the other hand, almost definitely knows that the flat-Earth idea was ditched in 330 BC, when Aristotle proved the world was spherical. Regardless of his ability to read BC Greek cosmological treatises, he’s outmatched here. Jacare will use his power advantage to walk through Camozzi’s leg kicks and secure the takedown. Once there, "The Alligator" will claim another victim and secure the first round RNC victory.

Vitor Belfort (22-10) vs Luke Rockhold (10-1)
Time for the main event of the evening! The 36-year-old Vitor "The Phenom" Belfort has been on an impressive run lately, winning eight of his last ten fights (with those only losses coming to current champions Anderson Silva and Jon Jones). Most recently the “Young Dinosaur” took out Michael Bisping with a beautiful head kick last January and hopes to set up another shot at the belt. Outgoing Strikeforce middleweight champion Luke Rockhold, however, looks to make Belfort’s title aspirations go the way of the the Staurikosaurus. Rockhold has also raised the stakes by insulting Belfort’s heart, sportsmanship and masculinity. It’s going to take more than his All-American good looks to get out of this one.

The strategy to beat Vitor Belfort hasn’t changed in the 15-plus years he's been fighting: Weather the early storm and try to bring him into the late rounds. Easy to say, hard to do. Belfort hasn’t had a fight go the distance since 2007 (and he won that one). Despite this, Rockhold has all the tools to pull this one off as long as he doesn’t force prolonged engagements. He’ll work the clinch and press Belfort against the fence to wear him out. If the rounds move from late Triassic to early Jurassic, we all know what that means -- goodbye Staurikosaurus. Rockhold by unanimous decision.

That wraps up another gripping edition of the Downes Side -- don't forget to make your own picks at UFC Fantasy. Follow me on Twitter @dannyboydownes. Also, don’t forget to leave your own thoughts, predictions, comments and other hair removal methods on the page here.