The Downes Side: UFC on FUEL TV 10 Predictions 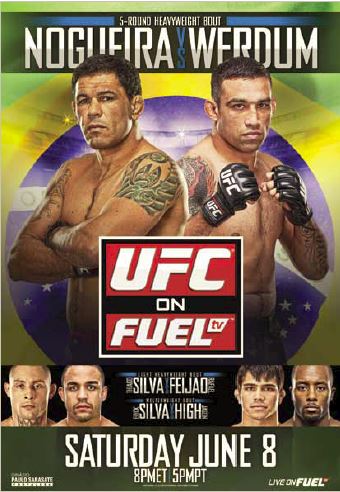 That’s right boys and girls, it’s time for another Brazilian edition of the Downes Side! Get ready to pronounce your r’s like h’s because I’m rammering rome rard-ritting fight roroscopes.

Whatever your phonetic preferences, you’ll enjoy watching UFC on FUEL TV 10 this weekend. Live from Fortaleza, Brazil, the main event of the evening pits two Brazilian submission specialists (fancy finding one of those) as “Minotauro” Nogueira faces Fabrico Werdum. The co-main event of the night will crown the second winner of The Ultimate Fighter Brasil as William Patolino Macario looks to continue his knockout streak against Leo Santos.

Rony Jason (13-3) vs Mike Wilkinson (8-0)
We begin in the featherweight division for Rony Jason and Mike Wilkinson. Winner of the first-ever TUF Brasil and the MMA world’s second-favorite fighter in a horror movie mask (after Joseph Benavidez as Pennywise the Clown, of course), Jason looks to run his win streak to eight. A Brazilian jiu-jitsu black belt with seven career submissions, Jason showed off his power in his last fight when he TKO’d big puncher Sam Sicilia at UFC 153. A former TUF Smashes contestant making his featherweight debut, Wilkinson has solid boxing, but prefers to use top control to smother his opponents.

While Freddy vs. Jason was a competitive matchup, Wilkinson vs. Jason won’t be quite that contentious. The Brit may have been victorious in his last fight against Brendan Loughnane, but he exposed a lot of weaknesses, especially his cardio. Has he improved it for this fight? We’ll never know, because Jason will rush his opponent right off the bat and earns the first-round TKO.

Daniel Sarafian (8-3) vs Eddie Mendez (7-1-1 1NC)
Next stop: Middleweight for Daniel Sarafian and Eddie Mendez. A finalist in the first season of The Ultimate Fighter Brazil (an injury bumped him off the finale), Sarafian possesses a strong judo background and six career submissions. He’s looking to rebound from an unsuccessful UFC debut against C.B. Dollaway in January. A Strikeforcean making his UFC debut, Mendez is a hard swinging brawler whose fists are his primary weapon.

One of the most overused phrases in MMA is, “He has a puncher’s chance.” Basically, it’s a way of saying that a guy completely outmatched might get lucky. It’s like when my mom told me that the other kids picked on me, “Because they’re jealous." That said, Mendez has a puncher's chance. He'll swing hard and himself into the clinch doing so. From there, Sarafian will take him down, advance position and lock up the arm-triangle to secure the first-round submission.

Erick Silva (14-3 1NC) vs Jason High (17-3)
We drop down to welterweight for Erick “Indio” Silva and the “Kansas City Bandit” Jason High. An explosive striker with black belts in both jiu jitsu and judo (seriously, are grappling-based martial arts a part of school curriculum in Brazil?) Silva entered the UFC with a lot of hype, but a questionable disqualification to Carlo Prater and a loss to Jon Fitch have pumped the brakes a bit on the hype train. A former Division-1 wrestler at Nebraska (at least it's not another Arizona State guy), High returns to the Octagon for a second stint.

Much like the classic battle between Robert Balboa and Thunderlips the Ultimate Male, this will be a striker vs. grappler type of match. Yes, Silva does have excellent submission skills, but his advantage on the feet is much more pronounced. If he’s able to get comfortable and find his range, he could finish this fight quickly. Based on his last performance, though, I believe that High will be able to use his wrestling to control the pace and grind out a unanimous decision victory. Bonus points if he utilizes the atomic leg drop.

Thiago Silva hasn’t won a fight since August 2009. While he may hold that time close to his heart because “Party in the U.S.A” was at the top of the Billboard charts, it’s about time he got over it. This will be a slugfest as both fighters will let the leather fly. As the fight progresses, Feijao’s shaky cardio will cost him another win. As the third round begins, Silva will score a takedown then proceed to ground-and-pound his way to a TKO victory. Looks like he’ll be trading in Miley Cyrus for Macklemore. Can’t win ‘em all...

William Macario (6-0) vs Leonardo Santos (11-4)
That leads us to the finale of the TUF Brasil second season. In one corner stands William "Patalino" Macario. At 21 years old, he is the second-youngest fighter in the UFC and has finished all six of his career opponents. He earned his spot in the finals with explosive standup, including two brutal knockouts. Macario would have faced Argentinian Santiago Ponzinibbio in the finals, but Ponzi was injured in the semi-finals (so Sarafianesque), clearing the way for his opponent, Leo Santos, to step in. Besides being blessed with the name of a ninja turtle, Santos clearly has fate on his side.

Both fighters are incredibly explosive with the ability to finish the fight at any moment. The difference here will be experience -- Santos' first pro fight was ten years ago against Takanori Gomi, and he started winning international BJJ competitions in his early teens. Macario has steamrolled all his opponents thus far, but he won’t be able to do that to Santos, here. The frustrated Pato will do what your average 21-year-old does in such a situation -- force things. Normally that earns you a slap in the face or a killer hangover, but in this case he’ll wind up being submitted by a jiu-jistu world champion. Santos via 3rd-round submission.

Minotauro Nogueira (34-7-1 1 NC) vs Fabricio Werdum (16-5-1)
Time for the main event of the evening! Nogueira won their first matchup in 2006, but if the movie “50 First Dates,” taught me anything, it’s that remembering things isn’t important. With 22 combined UFC/PRIDE victories (tied for second placed behind Wanderlei Silva’s 27), Minotauro Nogueira is one of the legends of the sport and looks to prove that he still has something left in the tank. After wins over Roy Nelson and Mike Russow, Fabricio Werdum hasn’t stepped inside the cage since June of 2012. Another submission ace, Werdum’s been improving his striking and could be a potential threat for the heavyweight title.

Big Nog has been competing professionally in MMA since 1999. Once known for his unbreakable chin, he’s shown that all those years of fighting have taken its toll. Technically sound, he doesn’t pose a threat on the feet. Even if the fight were to make it to the ground, Werdum doesn’t subscribe to the jiu-jitsu philosophy of Dave Herman and can hold his own. Werdum takes this via 2nd-round TKO

That wraps up another relpful edition of the Downes Side. Be sure to follow me on Twitter @dannyboydownes. Also, don’t forget to leave your own predictions, thoughts, ropes and reams on the page here.