The Downes Side: UFC on FOX 7 Predictions 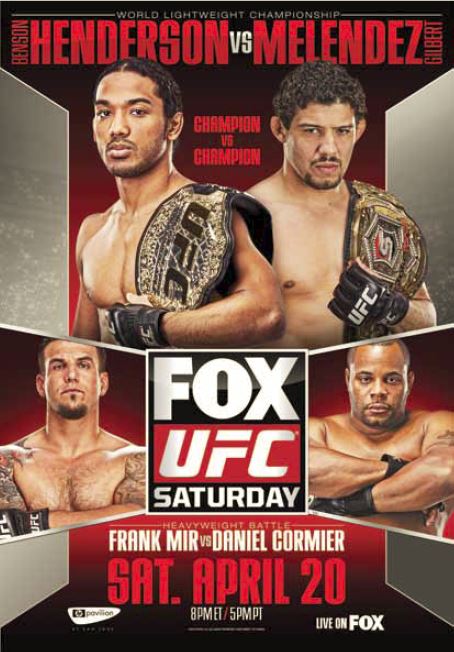 That’s right boys and girls, it’s time for another network television edition of the Downes Side! Seeing that it’s the seventh time the UFC will be appearing on FOX, luck should be on my side when making these predictions. Then again, you don’t need luck when you have superior mental acumen.

Regardless of your intelligence level, it’s definitely a smart move to watch UFC on FOX 7 live this Saturday night from the HP Pavilion in San Jose, CA. Informally dubbed “UFC vs. Strikeforce,” the main event pits champion Benson Henderson as he makes his third title defense against Gilbert Melendez. The co-main event of the evening also features two champions as former UFC heavyweight champion Frank Mir looks to back up his condescension toward Strikeforce Heavyweight Grand Prix alternate-turned-champion Daniel Cormier.

Matt Brown (16-11) vs Jordan Mein (27-8)
The night begins in the welterweight division as “The Immortal” Matt Brown takes on Jordan “Young Gun” Mein. After a tough patch where he lost four out of five fights, Brown has rattled off a four fight win streak -- and he's the only fighter to get four UFC wins in 2012 (look it up, bro!). Tied for the most KOs in welterweight history, he added to that total with a left hook to Mike Swick’s face in December. A crisp, athletic hellbow specialist with dangerous submissions, Mein steps into the Octagon for the second time after delivering Dan Miller his first career KO at UFC 158.

You won’t want to miss this Fight of the Night favorite. If your dog needs you to let him out during this fight, just let Beagle Lugosi relieve himself in the house. Mein possesses the technical superiority, but appears to be more comfortable when going forward. Matt Brown, however, isn't the kind of guy to move backward. Brown’s will crowd Mein’s rangeand prevent him from getting in a groove. While Mein’s grappling has improved, his fight against Tyron Woodley showed that he is susceptible to being controlled on his back. This will be a back-and-forth exchange, but Brown’s pressure and his ability to bring the fight to the ground against a polished striker (see his fight against Stephen Thompson) will lead him to the decision victory. Yes Audrey Shepburn will be upset, but that’s the price you pay for high-quality MMA.

Nate Diaz (16-8) vs Josh Thomson (19-5)
We drop down to the lightweight division for Nate Diaz and Josh “The Punk” Thomson. Diaz returns to the cage for the first time since his unsuccessful title shot against Henderson in December. A Cesar Gracie black belt and holder of the record for most significant strikes landed in a fight (238 against Donald Cerrone), he’s probably best known for his monk-like code of silence. Truly, no one knows more about communicating without speaking than Nate Diaz.  Returning to the UFC after nearly a decade in Strikeforce, Thomson is a former champion who’s extremely well-rounded. If Diaz is a "Sounds of Silence" type guy, Thomson's Simon and Garfunkel equivalent would like be “I Am a Rock."

Benson Henderson’s takedowns and striking game prevented Nate Diaz from getting any momentum going during their fight. Thomson may not have the striking credentials of Bendo, but he does have the grappling ability to put Diaz on his back. Couple that with the fact that Thomson can match Diaz’s conditioning, things aren’t looking good for the Vice President of Stockton Public Affairs. Thomson will eat a few shots on the way in, but he’ll ultimately bring this fight to mat. From there he’ll utilize top position and GnP to pick up the unanimous decision. That’s my story, and I’m sticking to it.

Frank Mir (16-6) vs Daniel Cormier (11-0)
We jump up to the heavyweight division for the co-main event of the night between Frank Mir and Daniel Cormier. Despite what you might think of the former UFC heavyweight champion, he does hold quite the impressive resumé including: most wins (14), most combined knockouts and submissions (11) and thanks to Danny Castillo, he even has his own internet meme (aka the #FrankMirFace). But Daniel Cormier is no slouch, even with all that internet heat in addition to the pressure of being an Octagon newcomer. Considered by many to be a future champion, Cormier’s mix of Olympic-level wrestling and heavy hands has propelled him to a co-main spot in his UFC debut and a perfect record.

Despite Cormier’s elite-level wrestling, taking Frank Mir down is like telling your mom what you really think about her cooking -- it’s never a good idea. His best chance to win this fight will be to keep the fight on the feet with his grappling, then use his hands to win. Mir’s offensive striking has steadily improved over the years, but his defense still seems lacking. His propensity for taking big shots will be his downfall against the former Strikeforce HWGP winner. Mir’s chin will get him through the first round, but the punishment will accumulate and Cormier finishes this fight with a 2nd-round TKO.

Benson Henderson (18-2) vs. Gilbert Melendez (21-2)
Time for the main event of the evening! Benson Henderson places his longest active win streak in the division on the line against Strikeforce champion Gilbert “El Nino” Melendez. Henderson has seemingly breezed through the UFC since coming over from the WEC, where he was also champion before being dethoned by Anthony Pettis in the promotion's final event. His size, wrestling and fluid striking has led him to victories over elite 155ers like Frankie Edgar (twice), Jim Miller and (most recently) Nate Diaz. Melendez looks to make a similarly successful transition as he steps inside the Octagon for the first time. Undefeated in his last seven fights, Melendez is another well-rounded fighter who can beat opponents in any facet of the game.

In the grappling department, this is a push. Henderson has been effective at bringing opponents down, but Melendez defends takedowns more than 75% of the time. Even if Henderson brings it to the ground, I don’t seem him being able to hold Gilbert there. Thus, this fight will come down to the standup game. While Melendez prefers a more aggressive, volume-based approach, Henderson focuses more on precision. Melendez looked flat in his only fight of 2012, blaming a lack of motivation for his so-so showing over Josh Thomson in their rubber match. Whether or not Gilbert's motiviated this time out, I see Henderson using his kicks and counter-punching to disturb Melendez’s rhythm, much like he did against Melendez' teammate Diaz last December. The champ retains his title via unanimous decision, and UFC goes 2-2 against Strikeforce for the night.

That wraps up another Nielsen approved Downes Side! Be sure to follow me on Twitter @dannyboydownes. Also, don’t forget to make your own predictions here, then share those alongside your thoughts, fears and felicitations on the page here. Now if you’ll excuse me, I have some Emily Brontë to read.