The Downes Side: UFC on FOX 6 Predictions

That’s right boys and girls, it’s time for another network television edition of the Downes Side! This issue is particularly special because the UFC has recognized my accomplishments and has invited me to attend the live event. They’ve even set me up with five star accommodations (my parents' house).

While I’m at the house Mr. Downes built, the UFC rolls into the house Jordan built for UFC on FOX 6. The main event inside the United Center in Chicago will decide the UFC flyweight champion as Demetrious “Mighty Mouse” Johnson makes his first belt defense against TUF 14 winner John “The Magician” Dodson. The co-main event of the night takes places in the light heavyweight division as UFC/PRIDE legend Quinton "Rampage" Jackson looks to derail the Glover Teixeira hype train. 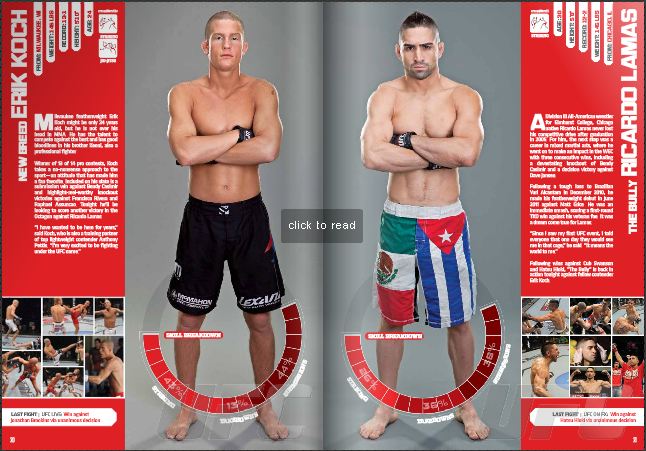 The main card kicks off in the featherweight division as former challenger Erik “New Breed” Koch looks to earn another shot at the title after being sidelined by two injuries in 2012. Standing in his way is a man who’s quietly moved up the ladder, local Ricardo “Bully” Lamas. Koch steps into the cage for the first time in 16 months and though he's known for his striking, Koch actually holds more submission victories (seven) than KOs (three). A carryover from the WEC, Lamas is 3-0 in his UFC career with wins over Hatsu Hioki and Cub Swanson.

Lamas needs to bring this fight to the ground. He’s a capable striker and even has a flashy flying knee KO at WEC 47 on his resume, but he’s outclassed on the feet. Unfortunately for him, that task will not be easy. In his last fight against Jonathan Brookins, Koch defended 19 of 20 takedown attempts and holds a career defense rating of over 80%. Lamas will try to get in and bring it to the ground, but he’ll be unsuccessful. As the fight progresses, Lamas will tire and make himself vulnerable. Koch will pounce on this and earn a 2nd-round TKO. Lamas will be disappointed, but at least he has his famous last name to fall back on for support. 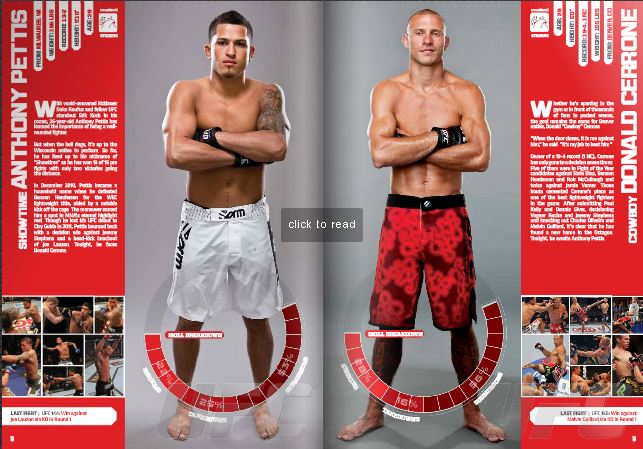 We move up to the lightweight division for what’s sure to be Fight of the Night. In one corner stands the WEC lightweight champion Anthony “Showtime” Pettis. Another victim of the injury bug, Pettis hasn’t been inside the Octagon since UFC 144 last February. There he landed a left leg high-kick KO that added to his already impressive highlight reel. Believe it or not, there was even this one time when he jumped off the cage and kicked Benson Henderson (seriously). Opposite him stands another WEC alum, Donald “Cowboy” Cerrone who secured a 1st-round KO of his own against Melvin Guillard in August.

While burning through some of the UFC's best lightweights in 2011 and '12, Cerrone has been angling for this fight for awhile. He even went so far as to accuse Pettis of “ducking” him. Well, just like Tom Hanks learned in 1998, you should be careful what you wish for. Cerrone has a solid ground game, but he lacks the takedown ability and strength to get the dynamic Pettis to the mat. Cowboy’s aggression makes him entertaining, but getting knocked down in the Guillard fight showed how that tactic is a double-edged sword. Despite a reach disadvantage, Pettis will control the outside striking and beat Cerrone to the attack. This will force Cowboy to rush in and receive a hit harder than any of his horses can deliver. Pettis via 2nd-round TKO. 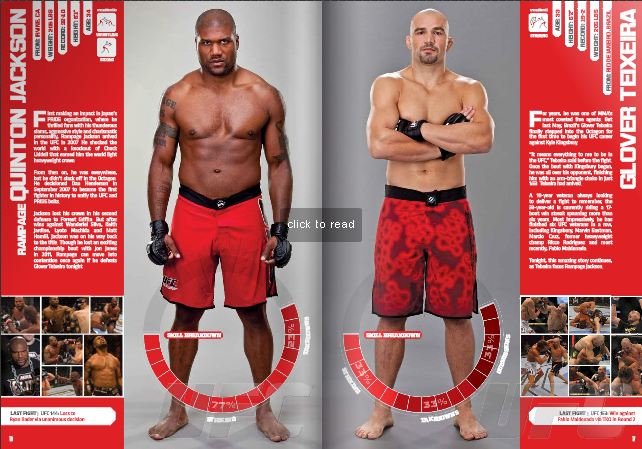 On to the light heavies as Quinton “Rampage” Jackson sets down his Playstation Vita long enough to fight Glover Teixeira. I’d like to say Rampage wants to redeem himself for such a poor outing against Ryan Bader at UFC 144, but he’s not exactly the easiest person to figure out (besides his love for Japan...and its women). Teixeira, on the other hand, is very easy to figure out -- he hurts people. Last October he showcased that ability as he beat down of Fabio Maldonado and outlanded his opponent 85 to 10 in significant strikes.

No one can deny Rampage’s career credentials. He’s done incredible things and rightly deserves his title as a legend of the sport. Legacy doesn’t win you fights, though. When in shape, Rampage’s solid boxing technique and takedown defense makes him a danger. While it could be enough to finish Teixeira, it likely won’t. The Brazilian will utilize his aggressive style and pressure his opponent. By the time the third round comes about, Rampage will be too tired and damaged to put up a fight. Teixeira wins via 3rd-round TKO. 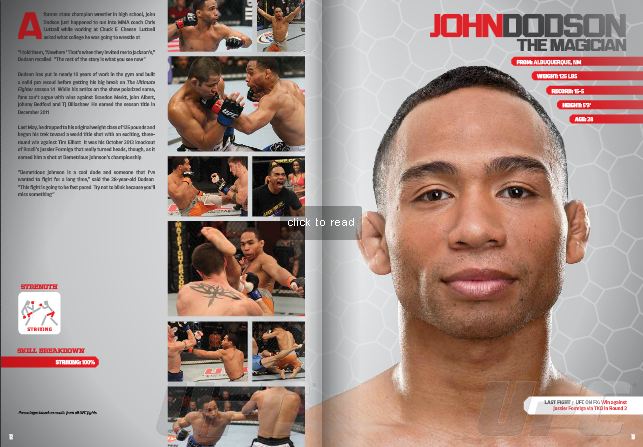 Time for the main event of the evening! After running through all the bantamweights on the 14th season of The Ultimate Fighter, Dodson dropped down to flyweight and earned wins against Tim Elliot and Jussier da Silva. Explosive with a powerful left hand, Dodson has never been taken down during his entire UFC career. Johnson was crowned champion in September after beating Ian McCall and Joseph Benavidez in the inaugural flyweight tournament. Extremely quick with an incredible work rate, Johnson has greatly improved his striking since moving down a division.

This fight will be a barnburner. Both men have the athleticism and cardio to constantly attack. While Johnson never seemed to struggle with Joseph Benavidez’s power, Dodson’s striking will give him problems. The Magician’s left hand will be the difference maker and slow down the champ. Johnson will end Dodson’s perfect takedown defense, but he won’t be able to hold him down or advance position. This will allow Dodson to get back to his feet and tag Mighty Mouse. This will be a back-and-forth fight with a frenetic pace, but Dodson’s advantage on the feet will help him secure the unanimous decision win.

That wraps up another enriching edition of the Downes Side. Be sure to follow me on Twitter @DannyBoyDownes. Also, leave your own comments, thoughts, predictions or favorite place for a Chicago-style hot dog in the comments, too.