The Downes Side: UFC on FOX 11 Predictions 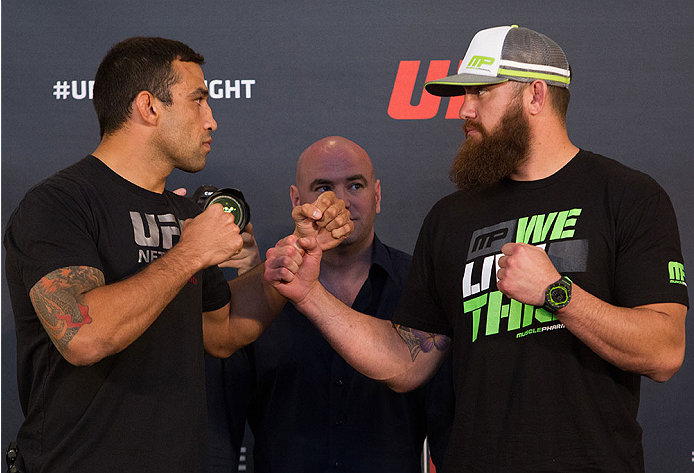 That’s right boys and girls, it’s time for another trip to the Magic Kingdom. No, I’m not talking about Disney World, it’s the Downes Side! It may not have parades, rides or instill in you a sense of childlike merriment, but at least the lines are a lot shorter.

More exciting than a trip to Space Mountain, the UFC rolls into Orlando, Florida tonight for another stacked UFC on FOX card. The main event of the evening pits Travis Browne against Fabricio Werdum in a fight that will determine the next challenger to the heavyweight title. In the co-main event, Liz Carmouche and Miesha Tate try to bounce back from recent losses, and gain some traction in the women’s bantamweight division.

We begin the main card in the middleweight division with Brad Tavares and Yoel Romero. An Olympic silver medal-winning wrestler from Cuba, Romero has been using his fists more than his grappling, as all seven of his wins have come by KO, and he showed his toughness in his last outing against Derek Brunson with a late third round knockout. Tavares comes into this bout riding a five-fight win streak. Unlike Romero, all his wins have come by decision. He’s not as explosive of a striker, but he does an excellent job of gauging his distance and keeping the same amount of pressure in the third round that he does in the first.

Choosing the winner of this fight is similar to Allie Calhoun’s conundrum from The Notebook. Brad Tavares is Lon, the smart choice. His style is nothing flashy, but it’s reliable. Yoel Romero is Noah; he’s a wildcard. He’s impetuous, sometimes reckless, and you’re not really sure what you’re going to get. Sure that can be fun, but can you trust him in the long run? Just like Allie, though, I have to go with Noah. Romero does leave openings, but Tavares doesn’t have the power to finish him. Romero can change the scope of the fight with a single strike and he puts Tavares away in the second round by TKO. Romero wins his fourth straight, and I bust out my limited edition gift set (box of tissues not included)

We drop down to lightweight for the odds on favorite for Fight of the Night. Cerrone is coming off a submission win over Evan Dunham and a devastating first round head kick KO of Adriano Martins back in January. He’s always entertaining, but he hasn’t been able to string together long winning streaks the last few years. Cowboy may be known for his fun striking performances, but 14 of his career wins have come by submission. Holding a 7-1 record inside the Octagon, Barboza’s vicious leg kicks have become his calling card. The 28-year-old Brazilian gets the highest profile fight of his career and he can make a name for himself with a win.

Barboza may be getting thrown into the deep end of the lightweight pool, but his last fight against Danny Castillo proved he belongs there. He was hurt early, but found a way to survive the round and come back strong to pick up the majority decision. He does have issues with his boxing defense (particularly overhand rights), so there is the potential that Cowboy could overwhelm him with punches. The difference here will be footwork. Cowboy does best when opponents stand flat-footed and stand in front of him. Barboza will not allow himself to be drawn into a shootout. Cerrone’s punches find a home, but he won’t sustain a prolonged attack. Barboza finds his range, effectively counters with his left hook, and kicks his way to a unanimous decision.

We move to the women’s bantamweight division for Miesha Tate and Liz Carmouche. One of the toughest, most durable fighters in this or any other weight class, “Cupcake” Tate is still searching for her first UFC win. She pushed champion Ronda Rousey to the third round in her last bout, but she ultimately succumbed to the armbar. She relies on her wrestling background and has taken down every single opponent she’s faced. Liz Carmouche is also looking for some momentum after dropping a decision to current #1 contender Alexis Davis in November. Carmouche utilizes timely takedowns, but she also overwhelms opponents with punches. She lands her significant strikes at a rate of 4.1 per minute, which is over 40% higher than the UFC average.

No one can question Miesha’s toughness, but she relies on that because she defends strikes at a below average rate. That’s a recipe for disaster against someone with the striking output of Carmouche. Tate will continue to come forward and even finish a few takedowns, but she won’t be able to hold Carmouche on the mat. The “Girlrilla” won’t take her foot off the gas pedal as she punches her way to a unanimous decision win.

Time for the main event! A jiu-jitsu black belt with arguably the best submission game in the division, Fabricio Werdum has become a well-rounded mixed martial artist. Even in his last loss to Alistair Overeem in 2011 he still outstruck the Dutch kickboxer. He’ll need every skill possible to defeat Travis Browne. Owning the shortest average fight time in the division, Browne has never been taken down in the Octagon and his last three wins have all come via first round TKO. Two of those wins against Gabriel Gonzaga and Josh Barnett have showed off his signature elbows.

If Werdum wants to win this fight, he has to bring it to the ground. Not only does Browne defend takedowns when they happen, but his reach advantage makes it hard for opponents to even attempt one. Browne does defend strikes at a below average rate, but I don’t see Werdum being able to put him away. Even inside the clinch, Browne should have the advantage. Look for Werdum’s initial attacks to be repulsed and Browne to counter strike effectively. As the fight progresses, Werdum will become frustrated at failing his takedowns and pull guard in a desperation move. He’s dangerous off his back, but Travis Browne is even more dangerous on top. “Hapa” ground and pounds his way to the third round TKO.

That wraps up another visit to the happiest predictions column on Earth. Follow me on Twitter @dannyboydownes. Also don’t forget to leave your own predictions, questions, affronts and ideas for Disney-themed walkout music on the page here. I don’t know about you, but I’d love to see Cat Zingano come out to this.