The Downes Side: UFC on FOX 10 Predictions 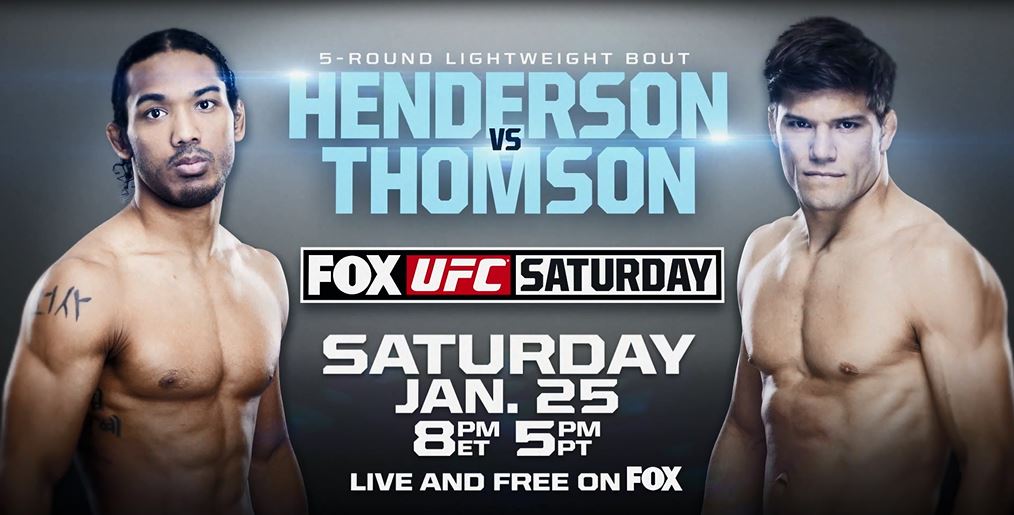 That’s right boys and girls, it’s time for the triumphant return of the Downes Side! It’s been a while since we’ve been together, but reports of my demise have been greatly exaggerated. The only thing that could keep the Nostradamus of MMA from his dozens of fans is a well-paying job with a dental plan.

Just like my old orthodontist, the UFC’s finest look to bring the pain this weekend for UFC on FOX 10. Live from the United Center in Chicago, the main event features a lightweight clash between “Smooth” Benson Henderson and Josh “The Punk” Thomson. Henderson makes his first appearance in the Octagon® since losing his championship belt to Anthony Pettis in August. Originally slated to fight Pettis (who has been sidelined with a knee injury), Thomson tries to hold onto the number one contender spot with a win. The co-main event of the night presents a heavyweight bout between Stipe Miocic and Gabriel Gonzaga.

The main card begins in the featherweight division with Darren Elkins and Jeremy Stephens. After being on the wrong end of a Chad Mendes fist in April, Elkins returned with a decision victory over Hatsu Hioki in August. Just like Kirstie Alley, Jeremy Stephens has learned how losing a little weight can be good for your career. After a prolonged stint at lightweight saw him fail to gain any real momentum, he’s been undefeated in his new weight class. Known for his power, he put it on full display with a vicious head kick knockout of Rony Jason in his last fight.

What Stephens offers in explosiveness, he lacks in tactics. His over-aggressiveness causes him to rush in blindly and open himself up to counterattacks (like against Yves Edwards). Unfortunately, Elkins has not shown that he has the ability to make him pay for that mistake. Outside of a freak Duane Ludwig injury, he has only finished one of his opponents during his time in the UFC. Elkins has the advantage in the pure grappling department, but he’ll have to get on the inside to bring Stephens to the ground. Stephens may not string together large combos, but only one of his big punches needs to connect. Elkins will move in for the takedown, eat a big uppercut and drop. Stephens avoids Alley’s Dancing with the Stars disappointment and earns the first round TKO.

We move up to the lightweight division for Donald Cerrone and Adriano Martins. The ol’ cowboy has had about as much luck as Yosemite Sam as of late. After winning his first four UFC fights, he’s failed to amass a solid winning streak and would drop out of the top ten with a loss here. Known for his fan-friendly striking style, the majority of his wins (14 to be exact) have come by submission. Not as well known as his opponent, Adriano Martins is not someone to be taken lightly. He’s riding a six fight win streak and showed off his BJJ black belt skills with his  armbar submission over Daron Cruickshank in his UFC debut.

There’s no doubt that Cerrone will be a big step up in competition for Martins. Having said that, the skills Martins showed against Cruickshank will serve him well. Cerrone’s open stance and style gives southpaws a distinct advantage. Cerrone is the more dynamic striker, but I expect he’ll wind up standing toe-to-toe and letting the punches fly. In that type of fight, Martins has the distinct advantage. Both fighters hold their hands low, so a well-placed Cowboy head kick (note to self: create cheap, high proof whiskey called Cowboy Head Kick) could sneak through, but Martins takes this by unanimous decision. Expect this one to be Fight of the Night. Let’s just hope Cowboy spends that money responsibly.

Two down with two more to go as we move on to the co-main event. After the only loss of his career against Stefan Struve, Stipe Miocic bounced back with the biggest win of his career against Roy Nelson. A former Golden Gloves boxer and collegiate wrestler, eight of his ten wins have come by knockout (That’s 80% for the statistically inclined). After losing to Brendan Schaub at UFC 121 and getting cut, Gabriel Gonzaga’s career comeback has been as impressive as Martha Stewart’s. He holds a 4-1 record (all wins by finish) and only needed 93 seconds to KO Shawn Jordan at UFC 166.

This is an extremely tight matchup. On the feet, Miocic has the speed and accuracy advantage, but Gonzaga has a solid chin and strong counterattacks. Gonzaga also has the far superior jiu-jitsu and a slight edge in the clinch. Look for Miocic to put the pressure on early, darting in and out with his strikes. As long as Gonzaga survives the initial onslaught, expect Miocic to start to fatigue. This will cause him to leave more openings in his defense and Gonzaga’s right hand will slip through. As Miocic tries to clinch up to buy himself some time, Gonzaga pounces and wins it in the third round with a guillotine choke.

Time for the main event! Former UFC and WEC lightweight champion Benson Henderson tries to set up another title run after losing his belt to Anthony Pettis. Excellent everywhere, he’s tactical, quick and always takes advantage of his opponent’s mistakes. A former champion in his own right, ex-Strikeforce titleholder Thomson made an explosive return to the UFC last April when a well-placed head kick gave Nate Diaz the first KO loss of his career. Another all-around fighter, he’s finished 14 of his opponents with a mix of knockouts and submissions (that’s 70% stat fans).

Benson Henderson hasn’t lost to a person not named Anthony Pettis since 2007 and that trend will continue. Henderson’s pacing and footwork makes it hard to read his timing. Much like his fights with Gilbert Melendez, Thomson struggles to hold Henderson in position and mount a prolonged offensive attack. Henderson maintains distance and picks apart Thomson with low kicks and straight punches. A frustrated Thomson will rush in and leave himself open for the takedown. This course of action will repeat for five rounds and Henderson cruises to the unanimous decision victory.

That wraps up another revelatory edition of the Downes Side. Follow me on Twitter @dannyboydownes. Also don’t forget to leave your own thoughts, predictions, ad hominem attacks or favorite Mark Twain work on the page here. And please, let’s try to avoid talking about the Twain-Ament indemnities controversy. Comment sections are for civil discourse.