The Downes Side - UFC 204 Predictions

That’s right lads and lasses, it’s time for another English version of the Downes Side! Live from Manchester Arena, the UFC brings some late night fights at UFC 204. In the main event of the evening, Michael Bisping defends his middleweight title for the first time against Dan Henderson. We’ll examine that fight and a few others.

We start in the welterweight division with Leon Edwards and Albert Tumenov. A southpaw striker, “Rocky” Edwards defends significant strikes at a rate of 57.92%, which is about 56% higher than Rocky Balboa. Albert Tumenov saw his five-fight win streak disappear at the hands of a Gunnar Nelson neck crank back in May.

When you see an English fighter against a Russian one, the prejudiced one in you might jump to conclusions about wrestling. This time around you’re only half right. Both fighters have solid wrestling defense, but they’re not particularly adept offensively. Edwards hit some outside trip takedowns in his last fight, but it’s unlikely he’ll be able to hit those against Tumenov. In terms of striking, Edwards has great head movement, but underutilized leg movement. He plants himself heavy to the mat and doesn’t advance well. This especially happens when he overcommits on his left hand. Tumenov can be passive at times (that was his biggest mistake against Nelson), but his greatest attribute is his counterstriking. When he answers, he comes with fluid, powerful combinations. Tumenov gets back in the win column with a second round TKO.

Next we move to heavyweight for Stefan Struve and Daniel Omielanczuk. After a long layoff, Struve only needed 16 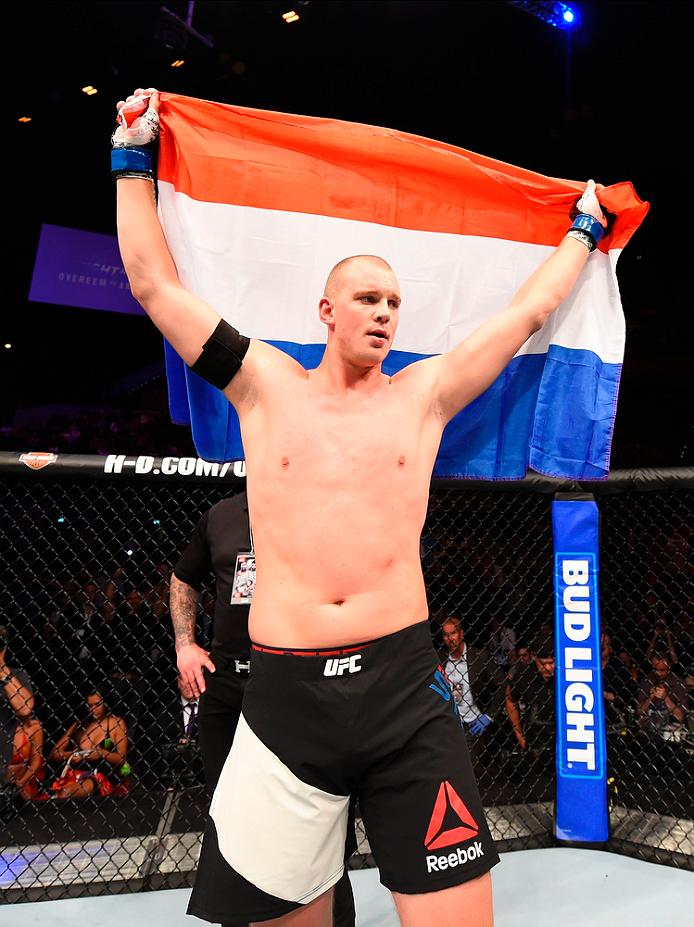 Antonio Silva at Fight Night Rotterdam" align="right" /> seconds to dispatch Antonio “Bigfoot” Silva in his return to action. Stepping in on short notice, Omielanczuk puts his three-fight win streak on the line. A heavy handed southpaw, has also has nine career submission victories.

Everyone talks about Struve’s reach advantage, but he rarely takes advantage of it. It’s just not his style. Instead of staying on the outside and throwing straight punches, he prefers to fight on the inside. While counterintuitive, his height makes it very easy for him to sneak in knees to the face. This is one of his preferred techniques, especially as a counter to charging opponents. Omielanczuk could take advantage of Struve’s relative passivity, but his strikes can be looping and wide. Even if Struve doesn’t batter him with 1s and 2s, the “Skyscraper” is a more refined striker. Both fighters have sub 50% defense, so expect a slugfest. At the end of the day, Struve’s superior technique and newfound power elevate him to a first round knockout.
RELATED: Watch Bisping vs. Hendo 1 from UFC 100 free | Watch Bisping win the title vs. Luke Rockhold free | Bisping reaping rewards from years of sacrifice | Henderson happy to re-write retirement script

That brings us to light heavyweight for Ovince Saint Preux and Jimi Manuwa. Saint Preux returns to the Octagon after going the distance with Jon Jones. Powerful, but unorthodox, OSP confuses opponents with his irregular attack rhythm. Manuwa’s two career losses have come in his last three fights. One was against Anthony Johnson and the other was to Alexander Gustafsson, but the “Poster Boy” could use some momentum.

Manuwa and OSP do best when they take control. They prefer to move forward and dictate engagements instead of sitting back and countering. Manuwa especially seems to know only one speed and one direction. OSP, on the other hand, prefers to lull opponents to sleep with inaction and then strike. Much like Struve-Omielanczuk, these two fighters also have sub 50% striking defense. Manuwa likes to stand in the pocket a bit too much, but that could be a strength in this fight. OSP may have gone five rounds with Jon Jones, but the pace of the action was muted. OSP actually threw more strikes in his three round fight against Rafael Cavalcante than in five rounds against Jones. Manuwa may lose the first round, but his pace wears down OSP en route to the upset decision victory.

Time for the main event! Michael Bisping has had a storied career in the UFC. Even though he’s currently tied with Georges St-Pierre for the most wins in UFC history, few thought he’d ever receive a title shot, much less become champion. Not only did he win the title, he exacted revenge against Luke Rockhold. Now, six years removed from being a victim of one of the most famous KOs in history, he has another shot at redemption against Dan Henderson.

At lot changes in six years…except for Dan Henderson. He may be older and have some more miles on him, but his power and ability to change a fight with a single strike hasn’t changed. Bisping, however, has elevated his game. He moves around a lot more and hides his strikes with sharp angles and feints. The only problem is that he wastes a lot of punches (his accuracy rate is 38.77%). In his last 10 fights, the only people Bisping has finished are Cung Le and Luke Rockhold. Le gassed and Rockhold fell victim to his own hubris. To win, Bisping has to stay disciplined and dart in and out for five rounds. Henderson needs to connect with one big punch. Bisping’s had a fairy tale story, but this weekend it turns into a nightmare. Dan Henderson strikes again with a second round knockout.

That wraps up another fairy tale edition of the Downes Side (probably one of the Grimm ones). Follow me on Twitter @dannyboydownes. Also, don’t forget to leave your own predictions, analysis, analogues or favorite analogies on the page here.